The Monitors team are back from their summer lay-off, but will this week’s new tracks send them screaming back to the hills?

Aim & QNC – How It All Got Started

Aim’s Cold Water Music album seemed to be playing in the background whenever anyone handed me an unlit roach in my teens, and sixteen years later it seems like little has changed apart from my lungs and head being a little less clouded. Coming from a new album that sees the producer teaming up with old collaborators QNC for a full-length album, this is a smooth, solid track that I can’t help thinking would’ve been more enjoyable then than it is now… Kier Wiater Carnihan

Had this auto-playing on SoundCloud before I noticed it was a new Howling Owl release, a label which I’m pretty certain we’ve written love for on here previously… so no need to repeat myself. ‘Dead of Night’ is a curiosity in every sense of the word, a strange, gloomy bar room piece of blues (someone get T. Bone Burnett on this) with added murky electronic chimes and sci-fi bubbles. It’s E B U’s intimacy which makes this worth repeat listens though, the haunting Bad Seeds aesthetic is just a bonus. Nicholas Burman

The first thirty seconds were promising; I thought this was going to be like The Stone Roses at their most fluid. Unfortunately the drama school vocals are just not doing it for me, and the arrangement becomes totally predictable. I’m not proud of this, but I didn’t make the whole five minutes. Sorry. NB

This is tagged as a ‘robot ballad’ on Soundcloud, and with good reason – it basically sounds like an android trying to learn how to cry. The little snatches of saxophone are absolutely delicious but it’s WAY too long, meaning by the time it’s finished you’d kind of forgotten it was still playing. KWC

Now here’s a singer I like listening to. ‘Rewind’ is less ambiguous than Kelela’s older material, and the slight change of pace works pretty well here. The bouncy bass wob suits her new-school R&B falsetto and, just like ‘The Message’ did, has me anticipating the second EP. NB

Mykki Blanco’s output is so prolific across all media that I’ve found it pretty hard to keep up at times, but nothing so far has seemed to match the jaw-dropping ‘Wavvy’ from 2012. Until now. ‘Coke White, Starlight’ is a strident, industrial monster of a track, like a sexy Frankenstein wearing a Versace cock ring, strutting through a booming warehouse club somewhere in Eastern Europe – and then it REALLY starts pumping. Basically, you absolutely cannot fuck with this (although it may fuck you (and expect you to say thank you afterwards)). KWC

The press shot of the band in ’60s dressing-up box garb got my spider senses for truly pretentious nonsense tingling. This isn’t even a bad song, but… why? Why would I listen to this when I could listen to the original bands who did it better? Why are so many people scared of the future? This is the sort of song that idiots would call ‘real music’. Stop it. NB

As is the recurring case with major label releases, there’s a gloss on this track that makes it totally impenetrable. It’s like they’ve wrapped cling film around the thing. There are certainly enough changes of direction to try and grip you (three elements, the last one being the most effective), but in trying to amalgamate every trendy mainstream sound (namely Flume and Hudson Mohawke) Duncan fails to actually show any of her personality. NB

I really liked Say Yes Dog’s last single, the oh-so-electroclash pop classic ‘Girlfriend’, but while this one follows a pleasant enough WhoMadeWho-style formula it’s not nearly as catchy. It’s still hard not to nod your head along to it though. KWC

White Hills – Life Is Upon You

A fairly laid back effort from White Halls, who normally leave your eyeballs stinging after three minutes or so. In fact, the ‘woo-woos’ in the background almost make it sound like a flipping Dandy Warhols track heard through a haze of poppers. And not in a good way. It will surely sound better when played during their upcoming European tour, although that’s of little use to me seeing as they’re not stopping in London this time round… KWC

Now for two men with barrels of personality, perhaps too much, and it’s great to hear Wiley moving back towards the more industrial side of things following the ace Special Request remix of ‘From The Outside’ from earlier in the year. As ever, Wiley’s lyrics are as hilarious as they are perfectly in step with the suitably grimacing, skittish beat courtesy of Zomby. I can’t put my finger on why Wiley is so genuinely entertaining but at this point I’m willing to let it be one of those known unknowables. NB

Single-Minded - Balls to Aquarius, this is The Age of L.U.N.A. 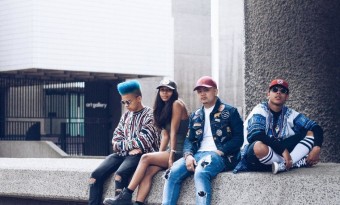 Their name may be an acronym for 'Live Under No Authority', but have The Age of L.U.N.A. ever faced an authority as imperious as Single-Minded? They're one of twelve acts to run the gauntlet this week...
Read More