The Monitors’ editor has been away for a few weeks. Here’s the best music he missed during that time, from Duke Garwood’s coldblooded return to Noga Erez’s violent dance arsenal…

Athlete Whippet – Tired Of Being Alone

South London’s Squareglass Collective have put out some cracking records over the last couple of years, so it’s no surprise that this collaboration between label founders Bunki and Ballerino produces golden results. A truly blissful bit of deep house, if you suffer from nervous anxiety then this is probably better for you than diazepam.

I gave a Duke Garwood fan a copy of his last album to review. A week later they gave it back, saying they just couldn’t find anything to say about it; they’d loved his previous work but Heavy Love just hadn’t made any impression. I had to agree, but I doubt they’d say the same about ‘Coldblooded the Return’. A beautifully sombre and dusky recording worthy of Nick Cave, let’s hope the rest of Garden of Ashes lives up to it.

Jesus christ, that first chord almost knocked me onto the floor. Should’ve expected that really. The absolutely gargantuan riff of ‘Milk Of Amnesia’ is 11PARANOIAS at their doom-ridden finest; now excuse me while I pick my shattered jaw up off the floor and attempt to bind it back onto my face.

I’ve always enjoyed seeing Great Ytene live, but this might be my favourite recording of theirs to date. Displaying a Disappears-worthy dedication to gritty repetition, the bassline propels ‘Locus’ into a gradually disorientating vortex before the final chord hits, taking a full minute to ring out. Nice.

H.Grimace put out one of my favourite indie EPs of the decade back in 2014, so the news they’ve readied a debut album is long overdue. Judging by ‘Royal Hush’, which shows the same shifting brilliance and ability to build intensity that seems to come easily to them, it should be worth the wait.

Ignore that grinning berk Martin Shkreli teasing his one-off Wu-Tang Clan album; there’s unlikely to be anything on it as good as this. German-raised rapper and Wu-Tang associate Joe Young may have Method Man guesting on ‘Crack Babies’ but the real genius is the production from Dame Grease, who offers up an absolutely glorious beat. Seriously, RZA himself would be proud of this one. As it is, he’s probably off to WhoSampled to find out what Dame Grease dug up for this…

The latest track from Lawrence English makes it sound like the world is collapsing in on you, a feeling which many may have become accustomed to during the steady implosion of the planet in 2016. This is more enjoyable though, a sonic blade unsheathed and plunged home again and again and again, for five shivering minutes.

Noga Erez – Dance While You Shoot

I first became aware of Noga Erez through her excellent cover of Son Lux’s ‘Weapons’. It’s taken a couple of years for some original material to appear alongside it, but ‘Dance While You Shoot’ more than makes up for lost time. Combining the cavalier cut-ups of Lafawndah and the crucial pop nous of Bonzai, it’s a track that makes you submit through its sheer firepower. Keep your eye on Noga Erez in 2017.

Rayon – A Beat Of Silence

The Notwist’s Markus Acher announces a new project with a mesmeric instrumental that sounds like it might have been created with three keyboards, a vibraphone and a marble run. While this is an engrossing study in minimalism, Acher’s inherent sense of harmony makes it a very listenable one – this could’ve looped for an hour and I’d have been content.

Ta’East’s ‘Light The Way’ collared me with the same rough ‘n’ ready approach as the new Danny Brown album, but the even more recent ‘Blackmale’ is equally distracting. Revolving around a dizzying but simple Middle Eastern sample, the ‘black Marlon Brando’ is building an interesting sound alongside partner in crime Cairo Mayeson.

TRAAMS – A House On Fire

I thought TRAAMS had nailed the indie-kraut sound with 2013’s ‘Klaus’, but with ‘A House On Fire’ they’ve taken those nails and jackhammered them in even further. With its jittery yelps and frenetic pace, it also gives Tense Men’s brilliant Where Dull Care is Forgotten mini-album a run for its money, which is no mean feat. Their house may be on fire, but by the sounds of it they’ve been using a petrol nozzle to put it out.

After a couple of weeks out of the country, not many things can make you feel more at home than a new Wiley track. He’s been in prolific form of late but this might be his best of the year, with even Devlin’s nitro-charged bars struggling to keep up with the ‘Georgie Best MC’ (haha wat?). Hopefully that comparison doesn’t mean he’ll booze himself to death next year, although they way 2016 has gone nothing would surprise you. Now where did I put my death pool shortlist…

Single-Minded: A healthy future for Tasseomancy? 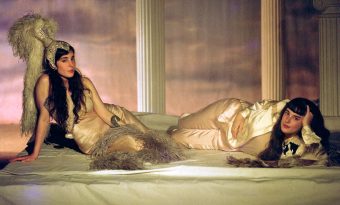