Cometh the hour, cometh the Camel.

This Saturday (11th April) at the Star of Bethnal Green, and the following Saturday at Servant Jazz Quarters, Duncan Thornley of Weird Weather smashes his record bag into Monitors editor Kier Wiater Carnihan’s hard drive, and the debris is shaped into four hours of exotic musical mayhem. For you to dance to. For free.

To celebrate, we spent Tuesday evening putting together a one hour ‘Earth, Milk and Fire’ mix. The fiery theme came from the fact that it was created on the same day that inventor John Walker sold the first ever friction matches. (OK smartarse, not literally the same day seeing as none of these tracks existed in 1827, but the same date.) However, Duncan had a record about K2 in his hands and Kier wanted to play a track about lightning, so we decided to make the theme more generally elemental. What are you gonna do about it, call the theme police?

So click play on the Mixcloud embed below for a sweet taste of Camel Milk, and then scroll down for some info on the tracks selected…

Earth, Milk and Fire by Camel Milk on Mixcloud

The infant Peggy was clearly a precocious little brat judging by her insouciant response to her family’s house burning down. No Peggy, that’s not all there is actually…

… as evidenced by the timely arrival of this stoner rock outfit from New Orleans. Notes from the sleeve: “The awareness of the formless beginning of forms and sounds. It is the immutable light that the Tibetans call the Clear Light state… reverberating like a thousand thunders… the arrangement of what they are hearing in the recordings is quite important”. As you might guess, it’s as proggy (and funky) as hell.

There’s a few fragments from the K2-themed album Tales of Triumph & Tragedy dotted throughout the mix, along with a couple of cigar ads and some dialogue from the Kurt Russell film Backdraft that we nicked off Youtube. Don Airey used to play keyboards in Deep Purple and various hard rock bands in the ’80s, and who better to make an album about a mountain than a hard rock keyboardist? Get it? A hard rock keyboardist. Forget it…

More great sleeve notes on this dose of early ’90s acid trance. “An ambient trip into the psychedelic cosmos of dance, smoke, sound and ecstasy. Skin up, expand your mind and TRANCE.” You heard ’em.

One of the best releases to date on the excellent Night School Records, we loved this slice of Suicide meets Julia Holter coldwave when we reviewed it back in 2012. Nothing’s changed since…

We were initially going to choose Romanian electro-prog experimentalist Rodion G.A.’s track ‘Alpha Centauri’, which is about a star, which is a burning ball of fire, but this one is better. Apparently it translates as ‘Lightning Song’ which, though tenuous, just about fits in with our theme too. Just.

Just the outro from this one, which must be a sample of something… but we have no idea what. Answers on a postcard.

Gallon Drunk – Up On Fire

Escape from New York – Fire In My Heart

This has become something of a Camel Classic since Kier first heard Heather from Black Impulse play it many moons ago. Along with barbecue grills, Olympic torches and combination boiler flames in winter, this is one fire you don’t want to go out…

We have no idea who wrote this (the 7″ sleeve literally just states ‘Turkish Disco Folk’ and the track names), but the fact that ‘Çoban Yildizi’ translates into ‘Lodestar’ means that it charts a course straight onto our mix…

Kier found a sleeveless copy of this record at Music & Video Exchange a while ago, in a condition which meant it cost rather less than its usual asking price of eighty-odd quid. Happily this lost, London-recorded Ghanaian classic still plays through fine. More than fine, in fact…

There’s no smoke without fire, and there’s no tobacco smoke without rum. At least not on this jaunty snatch of catchy Colombian cumbia. (Ignore the jump at the end. Ignore it!)

A questing orchestral disco number by the Indian-born English producer and songwriter Biddu, whose notorious claim to fame is being the man behind ‘Kung-Fu Fighting’…

A cut from Aswad’s dub version of New Chapter. Features some excellent work on the pitched up snare sound.

Some soothing ambi-kraut courtesy of a pair of German legends, as we wind down towards the end…

Benoit Pioulard – The Very Edge Of Its Flame

Our last track is also the most recently released, being the stand-out track on Pioulard’s gorgeous ambient album Sonnet, released just over a week ago on Kranky Recordings. A fitting way to burn out… 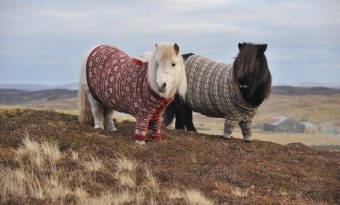 Our very own dynamic duo Swizzle Knicks present their last mixtape of the year - and the first to be mixed using actual headphones! Delve in for tunes by Arca, Marvin Live, Sau Polar, Eagles For Hands and Thrupence...
Read More