‘Infidel’ is a brief and reverb-heavy shot of electronica. The LA artist plays around with every ‘turn it up to 11’ option possible while a futuristic, percussive mess builds throughout. NB

We’ve had a heatwave on in London, and in times of high temperatures you need two types of music – funky tracks pumped full of enough energy to help separate your skin from the seat it’s stuck to, or music that seems like it’s actually melting alongside you. This sultry, snoozy number from Fog Lake is definitely the latter, and they get extra marks for riffing on the bells from Broadcast’s ‘Man Is Not A Bird’ during the outro. KWC

This track goes pretty damn well with the one above it. Arkansas duo Gibberish would probably consider the current London ‘heatwave’ refreshingly cool, and ‘Colonies’ is a drowsily hazy song. It sounds a bit like an Animal Collective track after being put in the microwave at full power in order to kill off all the irritating bacteria. Probably a little overlong at six minutes, but it wasn’t just the energy-sapping sunshine that stopped me from turning it off before the end… KWC

A return to the fold can always be a little tricky for people with as much musical baggage as Janet Jackson. Not that you’d be able to guess that by the sounds of ‘No Sleeep’, the dreamy R&B atmosphere of which suits her soft vocals perfectly, and reminds you what a decent slow jam actually sounds like in a world full of James Blakezzzzz. NB

Whimsical, earnest, folk-pop that feels like it’d blow over in a faint breeze… and yet I can’t hate this as much as I’d like to. Something about the mellifluous guitars and rousing string motif make it feel oddly cooling in this oppressively hot weather, and if you close your eyes you can convincingly pretend that you’re sitting in a field with a pint of ale at End Of The Road festival. Fair play. KWC

I like the injection of horns in the second movement of this sci-fi synth krautrock number, but otherwise the overt wigginess is a bit of a turn-off – it sounds more like a noodle than a track. NB

Attempting a musical comeback after being in Lost Prophets is an unenviable task to say the least, but the band’s remaining members (alongside former Thursday frontman Geoff Rickly) might, against all the odds, actually manage it. I loathed Lost Prophets even before the sickening revelations about Ian Watkins, but ‘Death Rattle’ is, shockingly, immensely impressive. Fuelled by all the dramatic, post-rock power of Mogwai at their most grandiose, if the rest of forthcoming album Permanence is as good then it might constitute the sort of unbelievable recovery usually reserved for Rocky films. KWC

Whoever came up with the concept for this video is a genius; you know any video where the credits include ‘Leather Work’ and ‘Laser Buttplug’ is going to be worth a watch. While the rap element is more than a little clunky, the melodic vocal hook is worth a copy and paste job to get this to a more cohesive dance cut. NB

Rejjie Snow – All Around The World

According to IMDB, Tarantulas: The Deadly Cargo was a late seventies TV movie that the directors of Snakes On A Plane probably saw at a formative age and hoped everyone had forgotten about. It only gets an average rating of 4.7/10, but its musical namesake is a solid seven-and-a-half. Slower (but not softer) than your average Sleaford Mods single, the refreshing change of pace means the bass and guitar aren’t as buried under Jason Williamson’s quickfire invective as usual, resulting in something that sounds unexpectedly like the recently re-emerged Prinzhorn Dance School. KWC

Son Lux – You Don’t Know Me

A skittering, drum-heavy, electronic post-rock effort, with a strained male vocal that adds a sort of ghostly country & western element. ‘You Don’t Know Me’ is a strange but successful grouping of styles and trumps Son Lux’s Lorde collaboration as the best thing I’ve heard from him so far.

The forthcoming U.S. Girls album Half Free is fast becoming my most-anticipated 4AD release since the Scott Walker & Sunn O))) collaboration. Meg Remy gives it everything as she screeches all over the smeary synths of ‘Women’s Work’, and she also directed the video above – a hypnotic, sepia-toned meditation on “our collective paralysis in the face of ageing.” That paralysis doesn’t seem to have affected Remy negatively though – if she carries on like this then I can’t wait to hear what she sounds like when she’s Scott Walker’s age… KWC

Single-Minded: BEAK> are back! Twice. 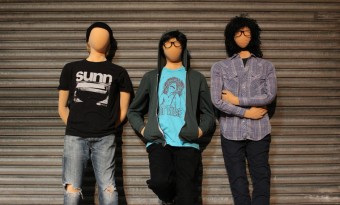 Geoff Barrow's BEAK> are back. Twice. Backwards. Confused? Peep this week's Single-Minded for an explanation, as well as new music from Low, Roseau and more...
Read More