There’s a constant joke on YouTube comment threads; when people ask “what song is this?” someone always replies, “Sandstorm – Darude.” The thing is, for at least a third of PC Music releases, you’d actually believe them for about ten seconds, before thinking, “who did this remix of ‘Sandstorm’? And why?”

When I was about fifteen I knew a guy called Phil who’d unscrew children’s toys and play around with the wires that would generate the various sounds it could produce. He’d also crack into Gameboys and produce 8-Bit music, as was popular at the time, by programming Gameboy sounds into happy hardcore-cum-dubstep bleepy beats. Him and a load of other people around the same age swapped ‘Top Friends’ places on MySpace and generally enjoyed the neon-coloured phase which was ‘nu rave’.

With Phil and the rest of the MySpace generation, it was music produced by teenagers for teenagers. It wasn’t sold to the music press as something genuinely awe inspiring. And not every website went and wrote long, boredom-inducing articles about ‘how important’ it all was. What started as some teenage fun grew up… because if that doesn’t happen you’re left with the most annoying person at the party.

My first issue with PC Music is the blatant ‘working class innit wink face lol’ approach to essentially gentrifying a genre which has been the mainstay of speed-induced, Subaru-driving suburban and inner city kids for the past twenty years. The 8-Bit element gets taken towards the gurning aesthetic of what was known to me when I was in school as music enjoyed by the steroid-addicted boy racers. Now, if I was one of those boy racers and I saw someone like me (used to be from a small town but now a twenty-something, music industry-working, skinny-jeaned bod) walking towards them with any of the tunes from PC Music, Vol. 1 playing from my phone saying, “Yah, this is well good, innit”, I’d rightly tell myself to “fuck, right, off”. (It reminds me a little bit of the Vice documentary on ‘Donk’ where the Bolton accent is actually subtitled, just in case, y’know, the City lot don’t get it.)

Musically, there is nothing new here. Much of it sounds like over-stylised remixes of the sort of beats that could be heard in 1999 on ‘Sweet Like Chocolate’ (at least Shanks & Bigfoot understood the process of arranging a track you might want to actually hear in your spare time). The weird jazzy elements and glitchy parts have been showcased much more subtly on the likes of the All City Amada compilation. The genre has also already been done much better by Young Lean and the Sad Boys crew from Sweden. Indeed, you could argue that Baltimore’s Wham City scene had already invented and progressed this style from as far back as Dan Deacon’s Spiderman Of The Rings way back in 2007. (Much of PC Music Vol. 1 also owes a debt to his debut, ‘Meetle Mice’, from 2003.)

If there is one positive, it’s that at least the lyrics are written in such a bubblegum, “I fancy you”, schoolgirl (the vocals are almost always female) gossip manner that it seems at least half genuine, and I can’t fault someone for wanting to do bubblegum lyrics. However, I can fault them for singing in a tone which gets closer to giving me tinnitus than sitting through a whole My Bloody Valentine show. If you like bubblegum, why wouldn’t you just listen to, say, the last Carly Rae Jepsen song? Instead of this Art School, head-up-arse, one-man project (many of the ‘various artists’ are pseudonyms for A.G. Cook) where it seems that someone’s idea of a joke has managed to spiral into a genuine, being-taken-seriously project – and no one has stepped in and asked: “Got any other ideas?”

The one reason everyone seems to be sticking up for PC Music is because ‘it says something about our consumer lifestyle’ (© every music site 2014-2015), or it says something about the commodification of music itself; because all the ‘performers’ are turned into robots with the vocoder, because QT is a fake energy drink they’re not actually selling. But they are selling you music. Are they going to be delivering me all their tunes as a free .zip on Facebook and rejecting the fees for DJ sets because ‘consumerism is bad and people need to not care about money’? Or are they going to take the piss out of the audience by ‘joking’ about how much stuff said audience needs to buy in a world where the conversion of capital is king?

As soon as this academically cynical point of view is taken as the foundation for art, they’re having their cake and eating it. The crutch of all this irony is in the video of the aforementioned QT project, in which while ‘criticising commodities’, she also welcomes a Beats Headphones product placement.

GFOTY (Girlfriend Of The Year) is one of the only artists on the roster who is actually known as a ‘personality’, due to her interview videos for Super! Super! magazine and such over the past few years. The only thing you need to know about GFOTY is that she claimed she almost dumped a boyfriend because he wasn’t going to buy her a coat she wanted. Either the acronym is so tongue-in-cheek that comments like these are some sort of post-post-modern pastiche of television personalities, or she’s just the living embodiment of what happens when the philosophy behind Made In Chelsea actually infects the output of the ‘creative community’.

Neither on record nor in the limited interviews does it sound like anything from PC Music is either self-aware or likely to laugh at itself enough for this to be a joke. The sheer weight of the marketing campaign – not unusual for something associated with XL – that has seen the genre become the darling of the serious music press, betrays a sense that behind this there is a feeling that what is being made here is very important and everyone will love it. Or it’s totally cynical and they think people will buy anything with a conceptual gimmick – in which case all the music journos are in the shit for taking it so seriously.

If this was another release from the happy hardcore/gurner scene no one would have blinked. But it’s not, it’s (relatively) big budget and Cook’s crew are going to be playing everywhere this summer, and the crowds are going to turn up and wonder if they look on point enough by being there. But as of yet I haven’t read a review or article which actually points out that the music is deafeningly dull and has been done before. 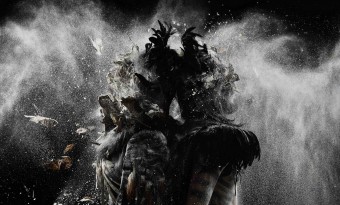 Nordic Giants have a reputation for live shows so visceral they cause fainting fits in the crowd - so why does their second album struggle to get the pulse racing?
Read More