As I wake from my slumber for the final day, I feel dirty. I feel hungover. I feel unclean. I recall a chalet party at room 205 which ended in the security intervening. I venture off to the swimming pool in a futile attempt to cleanse my soul and prepare for Steve Reich and the London Sinfonietta. To say I’m a little excited would be an understatement. I’m very excited.

Steve makes an appearance at the start to perform the short ‘Clapping Music’ piece before letting the musicians take on versions of ‘Electric Counterpoint’ and ‘New York Counterpoint’. It sounded magical. The acoustics were perfect and the performances were spot on, the only downside being that the short gaps in between pieces invited people to start taking and ended up embarrassingly delaying certain parts. One other thing is it did feel a little too clinical and ‘perfect’. With music like this it would be good to have it open to interpretation a little more and there didn’t seem to be any scope for manoeuvre, not helped by the fact the set was underlined by a continuous backing tape. A shame! 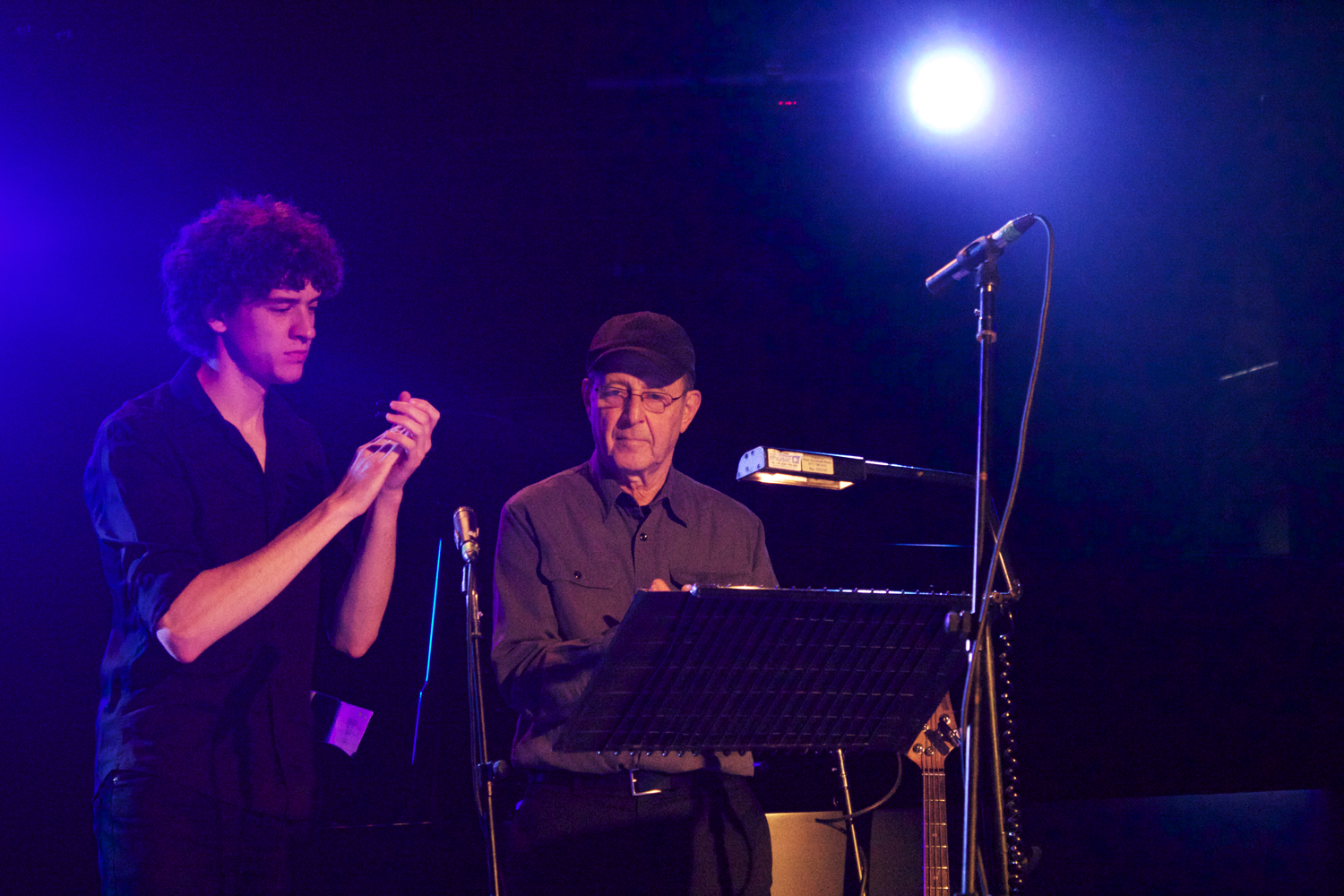 Next up was the loop master, William Basinski. He walks out wearing a black vest with huge white hair (him that is, the vest wasn’t hairy), looking like he’s about to turn it up to 11 and rock our socks, ’80s style. Thankfully he isn’t going to do that. “You might want to lie down for this one,” he says. He’s right; his music begs you to be horizontal rather than slumped against a wall. My friend decides to leave as he can’t get into it, and i have to agree. The loops and drones sound exquisite and harrowing, but I couldn’t help thinking that I’d rather be watching this in a church or a theatre rather than standing on a sweaty, soggy carpet in a hot room, feeling dehydrated and cranky. The samples sounded ethereal though as they washed over and over. 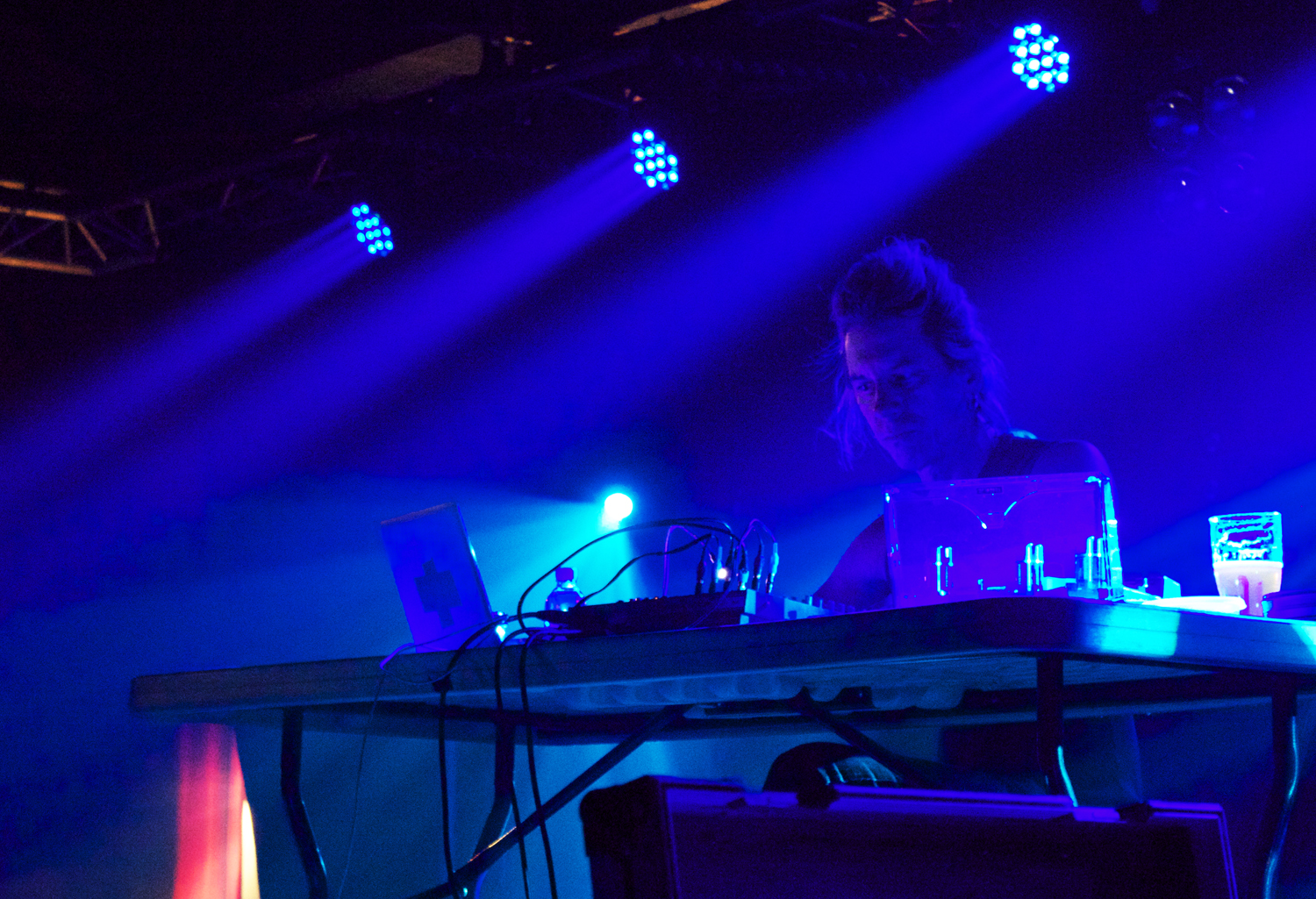 And over. I scuffle upstairs to catch Laetitia Sadier, and she gave one of the most charming sets of the weekend. It’s a shame that, despite her success with Stereolab, her solo work hasn’t been greatly noticed or appreciated, though it retains her love of niche, sophisticated retro pop and contains some of her best and most personal songwriting efforts. She remains a master conjurer of melodies and creator of lyrics from phrases that, perhaps, seem drily literary or academic on paper. The songs may not have textures and layers of Stereolab but they still contain the same heart and soul. She takes the time to thank Bradford for the Blue Milk revival and also nails Catholics who vilify sex: “it’s natural, it’s creative”. She ends with a lovely rendition of ‘Statue Can Bend’ and leaves the crowd yearning for more. 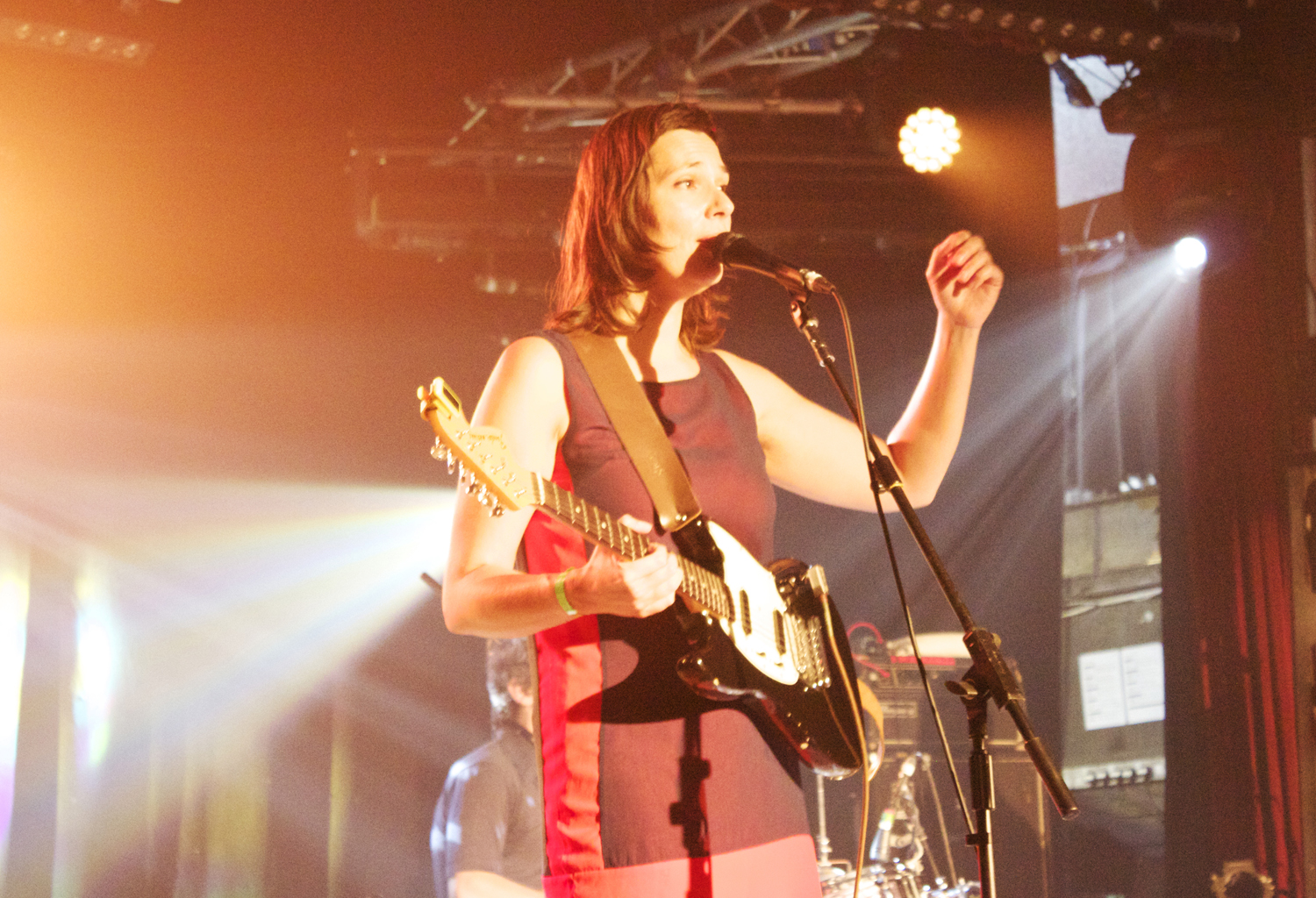 Now then. Remember when I was talking about Panda Bear nearly being the highlight of the weekend? Well, that particular accolade must be awarded to Ex-Electrelane singer Verity Susman. I was a casual admirer of Electrelane back in the day – never a huge fan but liked a couple of albums – and thought it would be interesting to see what her personal project involved. I stood there for the first 5 minutes and absolutely hated it.

Seriously, bear with me. It was 5 minutes of screeching, out of tune saxophone playing, with Susman sporting a brown handlebar moustache while strange visuals of saxophone penises (spurting white goo) were projected behind her. I don’t think I really got it, or understood it, or wanted to – I figured we had another Kim Gordon on our hands. But somewhere along the way, just as I was contemplating leaving, it hit me: she dropped a thumping beat and distressed organ blare and everything changed. 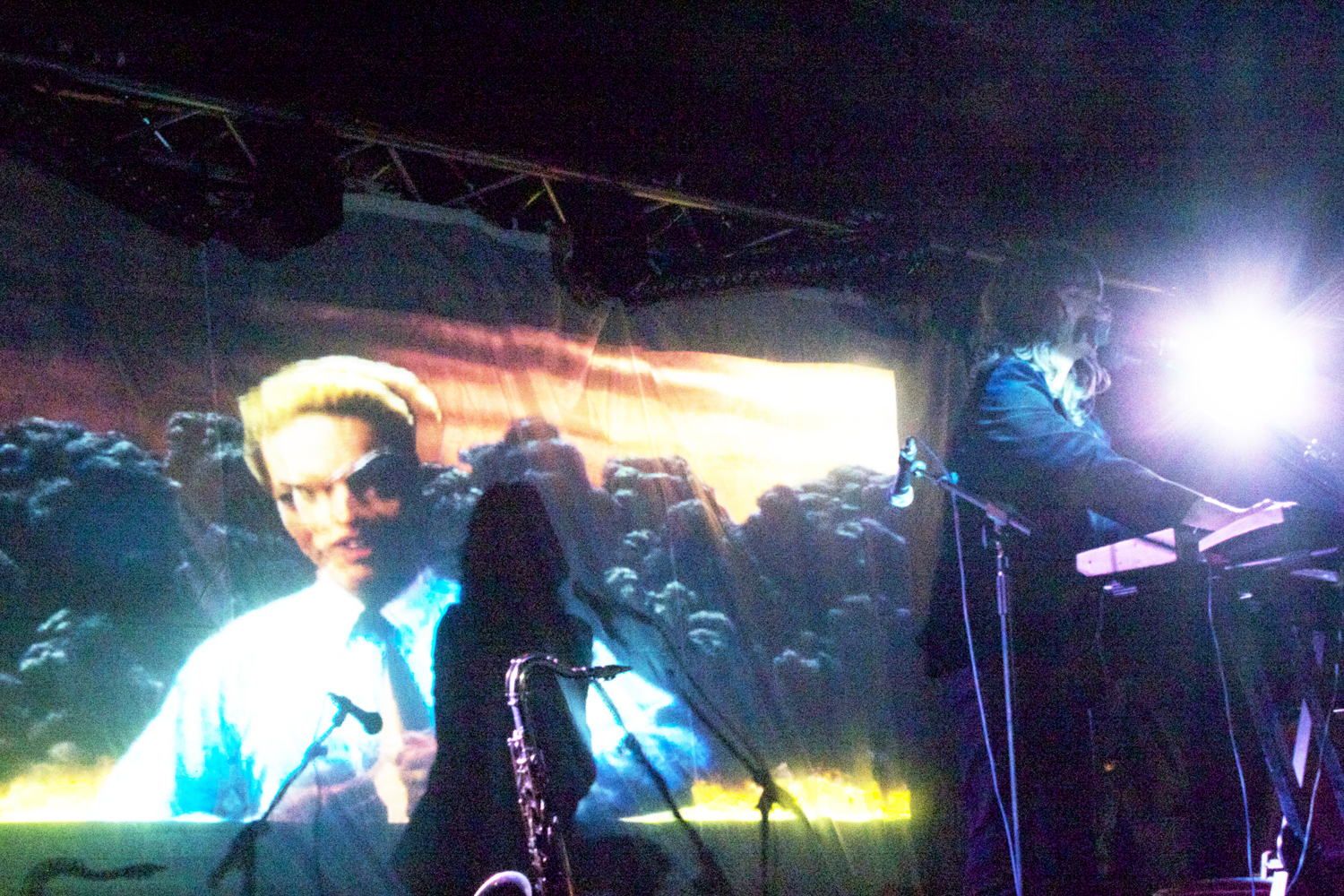 I was moving and dancing. I was watching visuals of Star Trek Voyager characters Captain Jane and Seven of Nine embarking on a lesbian erotic dream. I was listening to computerized speech demanding “spread your legs, let me put my fingers in”. It was insane, but it somehow worked. It was new. It was different. It didn’t take itself too seriously. It was simply brilliant. And I couldn’t stop telling everyone how good it was. I’m glad that a lot of people agreed with me and didn’t assume I was just a pervert Trekkie (because I actually am that as well).

After that, anything else was going to be a let down. I went upstairs and caught approximately 90 seconds of Pere Ubu before deciding it would be good to maybe head back to the chalet for a grilled cheese toastie. Apologies to Pere Ubu but I was thinking ahead, and wanted a prime spot and maximum energy for Dan Deacon.

As expected, it was a raucous party which provided one of the most endearing memories of the weekend. The great thing he does is instantly get you onside, getting all audience members to point at a spot on the ceiling and eradicate all their inhibitions and negative thoughts. Hell, he could put psychologists out of work he’s so effective. He parts the crowd, as if Moses, and makes us dance off against each other. It’s the kind of community spirit which ATP is renowned for, and it’s a huge bonus that he has the songs to back up the fun and games. The highlight was his performance of all 4 stages of ‘USA’ where the room actually got so hot and sweaty that I needed to take time out. Damn, he’s so good. If ever the opportunity arises to see Dan Deacon live, do it. You will not regret it. Unless you are adverse to fun. In which case, don’t. 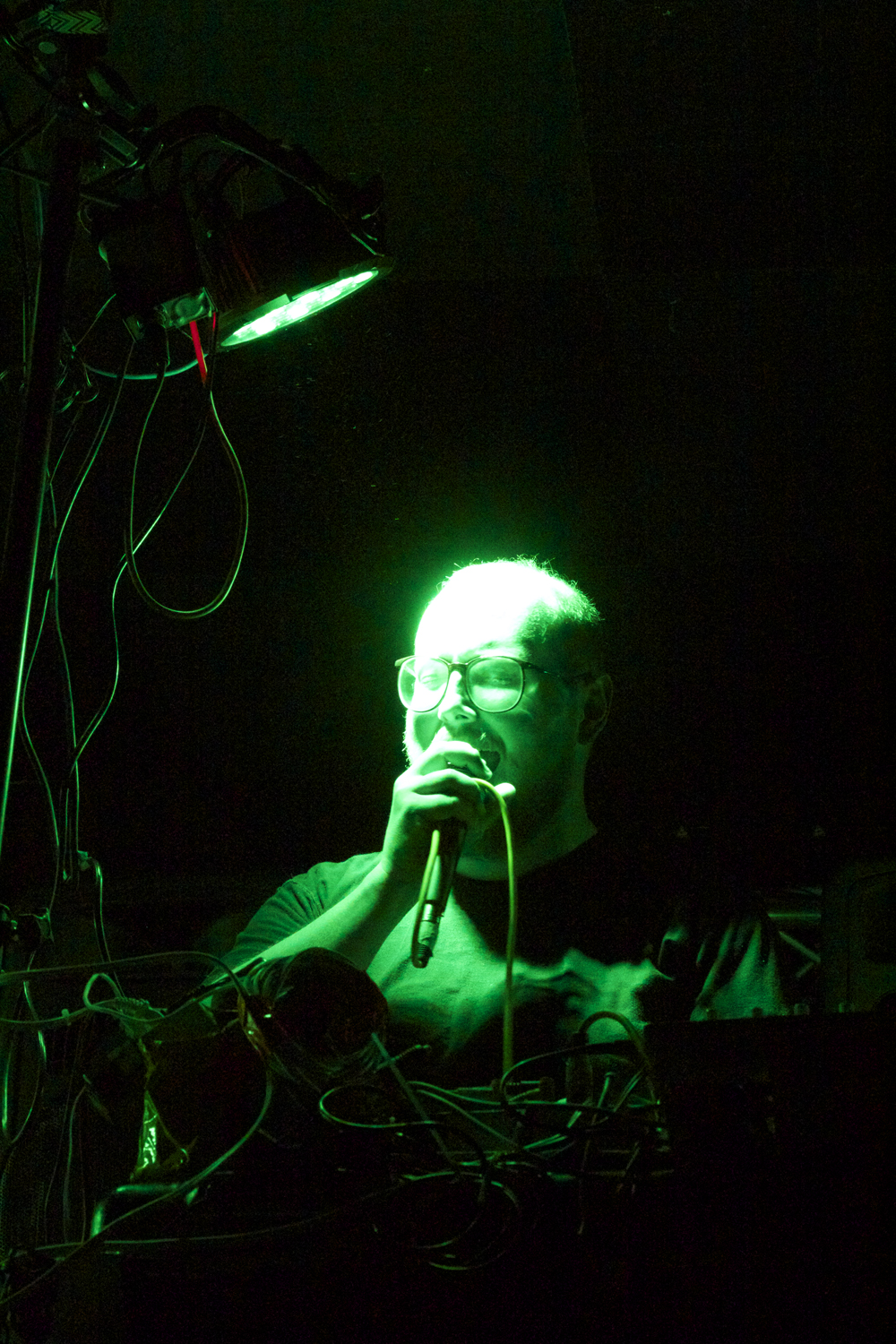 So, to the final Deerhunter performance of the weekend; and although it was eagerly anticipated, I felt pretty deflated that it was all at an end. They were performing the record that provided their real big breakthrough, ‘Halcyon Digest’, and the songs sound structured, focused and to the point; notably there’s no real sound-scape pieces as per the previous nights. They waltz through ‘Revival’ and ‘Don’t Cry’, but when we get to ‘Sailing’ you can begin to hear the strain on Bradford’s voice as he struggles to hit the high notes.

You can forgive him though. As a long time attendee of ATP festivals, I have never seen a curator (Matt Groening coming closest) interacting with the bill as he did, so kudos to you Mr. Cox. If he wasn’t playing a secret gig with the Tom Tom Club as Talking Cox, he was coordinating Tim Gane to perform with Leatitia Sadier on Stereolab’s ‘Blue Milk’ (a song he refers to in the festival programme as inspiring all Deerhunter’s albums), or joining The Breeders onstage, or singing the praises of Hollow Stars (his flatmates, a band who sounded very special in the brief time I caught them), or encouraging everyone to see Lonnie Holliday. The effort and enthusiasm was a joy to behold and I tip my hat to you, good sir. 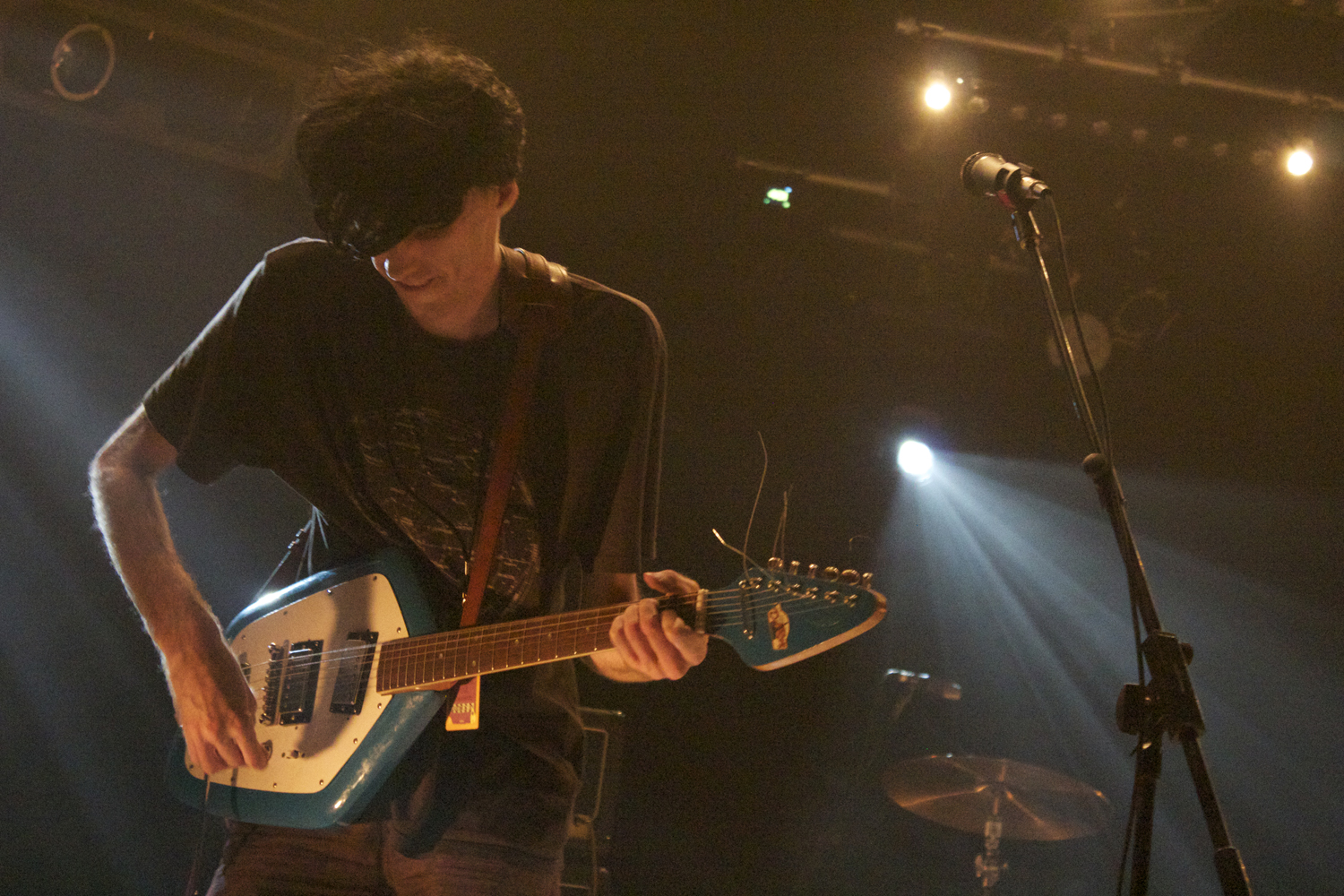 He takes the time to explain a little of what inspired the album, saying that the memories of Jay Reatard and Trish Keenan live on through it. ‘Coronado’ (which sees Verity Susman joining in on sassy saxophone) is dedicated to Reatard, as it was written two weeks before his untimely passing. The Deerhunter song of the weekend though, ‘He Would Have Laughed’, is dedicated to the late Trish Keenan of Broadcast. A song built on looped guitar which seems to rise and rise eventually reaches the ultimate release of drums and saddening guitar parts, which make me weak at the knees, before Bradford deliriously makes wild statements such as “I lived on a farm, yeah. I never lived on a farm. Where did my friends go? Where did my friends go?”.

It sounds mad but it captures the essence of his mindset perfectly. After the encore they drop songs from the new Monomania album (Bradford even decides to change into a lovely little floral dress), with the title track sounding particular rousing and providing a last real chance for everyone to lose it. The crowd takes full advantage and I don’t think I’ve ever seen a mosh pit/crowd surfing experience like it; almost as if it’s the last chance saloon and we’re taking this party out with a bang. It felt life affirming. It also felt very painful the next morning. 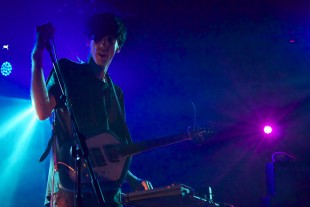