You know we’re big fans of Bristol over here at The Monitors, right? It’s why we go down there to DJ once every so often. With Oliver Wilde’s output putting the city back on the map, in tow with his Howling Owl comrades, it’s only fair we give the South West’s city a look in before the year’s out.

Now in its fourth year, Simple Things Festival returns with a line up so good it’s hard not to call it an ‘essential’ event. Taking place over multiple, if unconfirmed, venues (although the city isn’t exactly lacking with places to put parties on at) the one dayer on October 25 will be preceeded by a Caribou headline set at skate park/club Motion the night before. If you haven’t had the pleasure of seeing Caribou’s live sets, all drums and horns, then you’re in for a treat, and returning fans will no doubt be eager to hear tracks from the upcoming album ‘Our Love’ being given the physical touch.

While the big names, Mogwai, DFA 1979 and DJ Harvey, will no doubt draw the punters in, Bristol’s always been good at repping the more undiscovered talent…

The ‘will this actually be any good?’ enquiry will no doubt be labelled to SOPHIE, the PC Music (but not actually signed to PC Music, instead on the reputable Numbers label) artist could do a set of whirring incomprehensible glitches or go for some J Pop flavoured beats so cheesy it might actually be the musical equivalent of Brie. You’ll love it, or you’ll hate it, or you’ll love to hate it. Either PC Music is a prank, a stroke of genius, or neither, and everyone’s taking it too seriously.

Another Numbers act who’ll be making an appearance is Redinho, who luckily for some prefers to stick to more recognisable rhythms.

Bristolians The Fauns have been around for ages, although have mainly come to light with last year’s second album Lights. The grassroots shoegaze project manage to give a much worn genre a bit of life. And of course there’s the folk electronica of Oliver Wilde whose heart on sleeve romanticism and engrossing sound designs have been getting everyone rightly panting.

God Damn are Birmingham’s addition to the event, bring the hair and the rawk, for an aggressively exhilarating interlude while Leeds based duo, recent Too Pure Singles Club participants and Hookworms approved Menace Beach will be bringing the fuzzy melodies.

Listening to the drippy blubs of How To Dress Well’s new LP in tQHQ. A cry wank with a £100 jar of moisturiser.

I’d try and sum How To Dress Well up, but the above Tweet from The Quietus does it in fine manor (still can’t quite work out if that’s a total diss or not from tQ – think HTDW can take it as a backhanded compliment?). There’s also the scuzz punk of Eagulls, who will hopefully not be performing any eye surgery on the day. The ambience of Actress meanwhile will no doubt fit suitably into the city which brought the world Trip Hop.

Check out the shed load of other artists we can’t wait to get stuck into over at the festival site and get your tickets booked. We’ll see you in October for a pint of Black Rat. Simples.

Soundtracked: Under The Skin 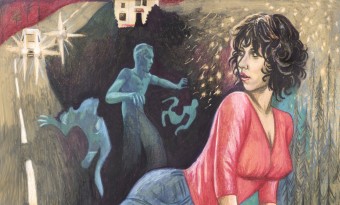 When it comes to true horror, that of reality, the greatest weapon in a filmmaker’s arsenal is the often-underused power of silence.
Read More