Nicholas Burman returns for his first Single-Minded since relocating to Barcelona, and it’s not only the sunshine putting a smile on his face…

Three years after the release of his last record, Doldrums is back and with a new label in the form of Sub Pop. Gone are the hallucinogenic textures and broken rhythms of Lesser Evil, and in their place a hard 4/4 beat around a much cleaner sound which sees the Canadian aiming squarely at grinding jaws. ‘Loops’ tangles itself around semi-cheesy nostalgia and a not-so-secret pop heart which suggests a few R&B records have been gracing his Spotify in the creative interim.

Godspeed You! Black Emperor – Peasantry or Light Inside of Light

Another bout of Canadian output here, although as is usually the case, Godspeed You! are more about dark abysses than warm dancefloors. However, this seven-minute ‘excerpt’ builds with a discordant orchestral element to create a strangely reassuring atmosphere, like a soundtrack to a David Attenborough documentary in some space age alternative universe.

Some bands don’t really need to change, and while some headaches will be induced by the primary-coloured early morning children’s TV show stylings of The Go! Team, it’s nice that there are still some groups out there showing a bit of positivity. Like ten Tom Tom Club records being played at once, it might only be digestible with long intervals between servings, but sometimes its nice to treat yourself.

There’s so much room in ‘Kong’ it feels more like a palate cleanser than a club smash, although that’s probably the point. The vocals are easy on the ear, and the mid-tempo pulse gives the washy percussion a much needed push. I’m unlikely to remember it after the night’s over but it won’t see me going to the bar either.

It’s true, we’ve added to the plethora of Kelela hype as much as the next blog. The truth is her brand of hyper-sexualised R&B is still the best. While FKA twigs often disappears in the minimalism of her production, Kelela’s consistent collaborative approach keeps the individual tunes fresh and the output varied. While ‘A Message’ is about a minute too long, and it doesn’t feel like the hook is solid enough to make it a proper banger, I’m still excited about the upcoming EP.

Taken from a new audio/visual project worked off the back of a French-made documentary entitled Esperando el Tsunami, which followed the film-maker digging deep into Colombia, ‘Pensar Bonito’ is a lightly percussive, harmony-filled number which is both warming and strangely spiritual. It’ll do well jumping on Ibeyi’s bandwagon too, after they made the most of similar Latin American musicality on their recent debut. This feels like it’s taken from an album which will be a real long-player experience. Can’t wait.

While enjoying the amalgamation of sounds in the music, a weird lovechild of ’80s slow jams and ’90s neo-soul, the lyrics really let Freeman down here. The ‘party boy lifestyle’ lyrics are irritating at best and the braggadocio in the final verse really kills the soul.

‘Bodyache’ is a song so focused on the mechanics of writing a big pop tune that it fails to flow that well. Although they’re clearly aiming for the Sia school of alt-pop, the chorus doesn’t deliver, partly because of the underwhelming vocals and lyrics and partly because the production sounds so flat.

It will surprise no one to find out this is getting released on cassette. The mid-’90s indie fringes can be seen as soon as the post-grunge American vocals kick in. While it’s pastiche, it’s pretty good pastiche, although sticks around for a bit too long.

Part folk, part light krautrock, ‘Salvation’ is an icy slow burner in the vein of Still Corners and Goldfrapp. Giulia Scarantino’s Scandinavian-styled vocals cut a neat middle ground around the country-tinged guitars. One for the crack of dawn when the sunrise starts peeking through the curtains.

Born in the face of adversity in their native Mali, Songhoy Blues take musical inspiration from the folk songs of their ethnic namesake. After being brought to these shores by the Africa Express project, they’re now releasing their highly rhythmic sound via Transgressive records. The vocals are attractive and the production has an analogue liveliness to it; and that, while so much of Western pop music is super compressed computer crunches right now, is one of the most refreshing this about ‘Irganda’. Along with the fact that it sounds like positivity bottled.

Another take on the Tame Impala slug-psych sound. I never thought Tame Impala would be such a reference point after almost falling asleep to their set at Primavera a couple of years back, but here we are. Thankfully ‘Reaper Invert’ is a much more gritty take on the genre, and the comically dramatic guitar solo whacked a smile right across my face.

Following on from the sumptuous melancholy of ‘Heartmelter’, Alma Elste returns with a slightly more industrial tone for her second single. Recalling childhood stories of computer games and swapping cards, the ’80s stomp of the drum pads drive the sparkling synths to a widescreen alt-techno outro. 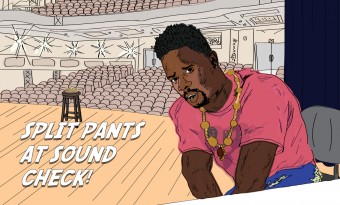