Native Dancer was the name of a famous racehorse in the ’50s, also nicknamed ‘the grey ghost’, presumably due to the way it ghosted through the field on its way to victory. While the spirited jazz fusion of London five-piece Native Dancer indicates that they were probably named after the 1974 Wayne Shorter collaboration with Milton Nascimento rather than the champion horse, their debut EP, which we are proud to unveil here for the first time, shows they are nothing if not thoroughbred.

Formed by bassist Jonathan Harvey, keyboardist Sam Crowe and drummer Ulysees (previously seen manning the sticks in Hejira, and stealing the sheep from one-eyed men in ancient Greece, obvs), they’ve augmented a frankly lethal rhythm section with soulful singer Frida Touray and saxophonist Josh Arcoleo, to create a questing sound that chucks away the map and plots its own course by the stars.

Some of the stars they’ve charted here include such luminaries as Herbie Hancock, Meshell N’degocello, Frank Zappa and, naturally, Weather Report, but it’s clear from the get go that they’re blazing their own trail. The swirling mists of opener ‘Love’ clear to reveal four sumptuous repeating piano chords, before a frisky beat whips everything up into a musical whirlwind reminiscent of drum n’ bass pioneers 4 Hero’s foray into jazz and broken beat on 1998’s Two Pages.

The pacing of the EP is as impressive as the musicianship. Touray’s melodies on ‘S.W.B.’ leap around the stave like a musical Mario, before the smooth soul balladry of ‘Flow’ finishes with the sort of guitar solo that can only be performed while wearing shades. Then the snappy rhythms of ‘Until Frida Speaks’ and psychedelic spoken word samples of ‘Paris Drive’ tie everything up with a brightly coloured space-jazz bow.

“This EP is a snapshot in a continuing process that was started over 2 years ago,” says keyboardist Sam Crowe. “Our only aim was to be as free as possible and allow all our influences from all the music we’ve loved and experiences in life, to come into play. Our habit as a species is to create categories because we perceive the boundaries we see to be some reflection of reality but on a deeper level, we are all one and part of the great process of the Universe. Life is a dance and we’re all native to this planet. No boundaries. That’s what Native Dancer is about.”

The EP itself may well come with the unavoidable boundary of having to finish, but Native Dancer’s music promises to flourish way beyond the locked groove of Vol. 1… 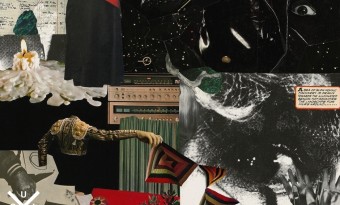 The new EP by Memphis post-punks Ex-Cult cements their status as the wily foxes of music, scavenging about in the shadows and living it up amongst the bins and shrubbery...
Read More