Guest blogger Paul Saiya, owner of music retailer Key Mail Order, casts his eye over the figures for music sales in 2014 in order to try and deduce the future of physical music formats. Or lack thereof…

Every first of January brings the publication of the previous year’s sales figures for the UK music industry. Being a glutton for numbers, I ravenously devour the integers and enter them into my spreadsheet containing figures from the past.

The rapid rise of streaming in the last three years has made the BPI (British Phonographic Industry) change the layout of their tables. The first thing to note is that for the first time, all single sales have been lumped into one figure (156 million, down from 2013’s 182m). In the past 10 years, physical format (7”, 12”, CD and ‘other’) sales were noted alongside downloads, the dominant format since 2005.

You may be surprised to learn that singles are still produced in physical form, but the numbers are now so small the industry can’t be bothered to list them. Only the most avid collector will pay as much as £10 for a 7” single, or £20 in the case of recent 12” singles by old timers Paul McCartney and Neil Young. The industry shouldn’t have been so hasty to kill off the CD single in the mid-noughties. B-sides – remember them? Fans used to love them and an EP of bonus tracks not on an album, always went down well and probably still would at under a fiver. I get so many calls from people without computers (and there are still a few), complaining that they can’t get hold of a new track by someone because it’s “download only.” Cue a lengthy diatribe on the state of music today!

Over in albums land, the CD is still king. Did you hear that correctly? 55.7 million little silver discs were sold in the UK last year and it’s supposed to be dead. Vinyl on the other hand, which collects miles of column inches, sold a whopping 1.3 million (admittedly, it was a healthy increase on 2013 which in turn was up on 2012). Against CD and downloads, vinyl accounted for 1.5% of the album market last year which is out of proportion to the amount of effort being put into the format by the industry and the media. Sales of download albums dropped by nearly three million (to 29.7 million) to the year before, the first fall since sales were counted in 2006 (single downloads were first acknowledged in 2004).

The drop in download single and album sales is the streaming effect and it’s clear to me that simply piping in what you want to hear, when you want to hear it, is the final advancement in the delivery of recorded sound. Record companies can easily crush physical formats by cutting off the supply and forcing people onto the internet. Manufacturing and distribution costs will disappear and you, the punter will no longer own your favourite music. Music and ideas could easily be thrown into the memory hole, never to be heard again. OK, dystopian thoughts took over there! Only time will tell how long our beloved formats will continue to be produced. However, I will have a go.

Frank Zappa came up with the idea of a download system thirty years ago, as detailed in his 1989 autobiography. Sadly, his death in 1993 meant he couldn’t witness the real rise of MP3’s. Downloads will of course hang around, although they are already beginning to seem passé. I am a CD fan and despite grumbling, I have purchased a few downloads of hard to find stuff, in order to burn onto CD and keep on the shelf.

From a label’s point of view, they don’t have to guess how many to press of something, which will then sit in a warehouse, gathering dust. I see stock figures of physical product from one of the majors and the amounts they have of some titles are scary. As for unsigned artists, it is now so easy to get music online and available to a potentially massive audience. Being able to justify a CD, or even a vinyl pressing now means the big time must be on the horizon!

The compact disc, now with more than 30 thirty years of history behind it, is too ingrained in many people’s lives (at least those over 35) to disappear overnight. I can see it being a popular carrier of music until the end of this decade, at which point it will tip into a niche market. On the other hand, with sales starting to plateau, existing consumers of the format could continue to want it for the next twenty years or so, unconvinced of the allure of intangible formats. Shelf space notwithstanding, the CD in itself is a great archive format. Apart from a few rogue discs, all of my collection still works, including the 25 year old ones. Just don’t smear them with jam! (I did look for the legendary Tomorrow’s World clip to no avail!)

As for vinyl, it’s possible that little renaissance could continue if the price drops back to more realistic levels. It would also help if suppliers packed them properly. At £15-£20 for just a single LP, they need to be in perfect condition. I have to send so much expensive stock back to the majors due to dinked corners and split tops. It may be why Sony, Warners and Universal have either already left or about to leave Arvato, the main supplier of their stock in the UK. I have complained to them consistently and I’m certain other record retailers have been vocal in their displeasure too.

Where do second hand sales of vinyl and CD’s fit in all this? It’s impossible to log and the BPI don’t even try to ballpark a figure for that side of the biz, which exists and is relevant. Is the purchase of a used CD in Record & Tape Exchange different to buying a new copy of the same album in HMV? Another essay!

Despite what you may read, the CD is definitely not dead and vinyl isn’t as important as you think. I await articles headed ‘Download purchases are drowning in the stream-ing revolution’. Or something like that.

This piece originally appeared on paulsaiya.wordpress.com 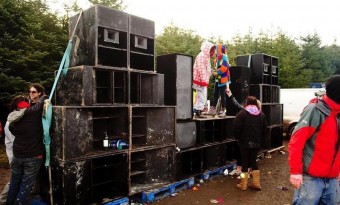 After six years running ‘free parties’ in the UK, our anonymous blogger takes us through the good times, the trials and the technical details of running a sound system...
Read More