We’re pleased to present the first look at the debut video from London’s Moon Dials, an formidable new collaboration between former UK Slam Champion Adam Kammerling (aka Adam the Rapper) and Evan Gildersleeve of Tired Arms (whose smoky ‘Ursa Minor’ video we featured back in 2013). ‘Falter’, the first track from their eponymous debut EP, brings out the best of both talents, matching Kammerling’s gravelly drawl to Gildersleeve’s bleak yet vivid production.

Together they conjure a track which seems to stagger with the lop-sided gait of someone who hasn’t quite recovered from the previous night’s intoxication. “I’ve got my wobble on, forgot the sun’s position,” Kammerling informs us, before admitting, “something smells and I can’t find the source…” The music is equally pungent, with long-drawn out tones woozing from one note to the next while the beat crackles along. It’s enough to make your head spin.

Olly Burn’s video enhances the mood, with Kammerling (sporting “four day yeti stubble”) looking battered, in one sense or another, as he recites his bars. His hands intertwine as he delivers, but while it looks like he’s providing physical counterpoint he could just keeping his balance. Violet tones flicker as the music fades out…

“Moon Dials is locked in the present, sitting in the midst of the everyday and being totally overwhelmed by it,” Kammerling explains. “Evan’s production evokes a completely different writing style in which the self is reduced and melted to the music. It’s a co-dependant relationship in which one cannot exist without the other.”

Gildersleeve concurs. “Each track is it’s own experiment so we’ll bounce ideas between us and develop the arrangements as we go. It’s exciting to collaborate on something whereby the vocal becomes an extension of the music and the two can openly inform one another.”

You can download ‘Falter’ for free via Soundcloud below, while The Moon Dials EP is released on February 3rd. You can pre-order it via Bandcamp here. 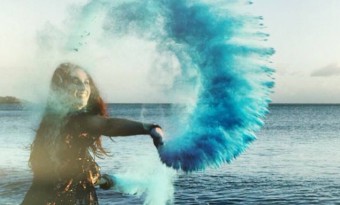 It's so hard getting a job these days that you might as well take LSD before the interview. Or at least that's what Jape recommend in their latest video...
Read More