I feel like death. It’s the hangover after the hangover before. But the one before that, was the one from the day after going to see Plaid and Clark at one of The Hydra nights in Studio Spaces, Wapping.

I also just lost my review to a random computer error. It was bloody brilliant. I dissected the nature of dance music illusions, griped about the venue, did a classic mid-review turnaround about the quality of the sound system, sounded like I knew something about sound systems, and then started ranting about Plaid.

It’s already taken me two weeks to write this for no good reason, and I don’t want the editor to get pissed off with me, or for the lovely guys at Warp to think he’s a chancer (I don’t care if they think I’m a chancer, I’ve always wanted to be a chancer, but I’m more likely to smuggle a tin of ginger beer into a gig these days than an arse full of pills).

But now I’m really pissed off, so I’m going to keep it simple.

The Hydra thing is a bit weird. Insanely top quality line-ups, often with a bit of retro appeal, and focussed on a particular label. You’re going to get value in terms of who you’ll see. This one had Plaid, Clark, Luke Vibert, Perc, and Throwing Snow. There were others. Most were a bit forgettable, Dopplereffekt were actively boring, but all those people I named owned the incredibly top quality sound system and made it their own.

The venue was faintly surreal, an anodyne representation of an actual proper rave for the night. Chewing gum banned. Bouncer confused by my bicycle pump. Drinks priced at a point where I’d need to sell a kidney to get drunk (which would be bad, because then I’d have less kidneys to process the drunk with).

Mostly we just didn’t have any drugs and it was a situation that begged for drugs. Dance music, eh? Just someone sitting on a laptop trying to make people gurn.

I don’t know, that’s unfair… the equivalent line was much funnier the first time round, I promise. I’ve also hit save, so you’re stuck with this fucker. Sorry.

Anyway. Plaid came on, after Luke Vibert closed down a largely stellar set (my biggest criticism was that there was a period where he wasn’t using the sound system to its limits, and everything started to feel a bit flat, but he got over it – and hard) with ‘Didgeridoo’. Which was some pretty top ‘knowing the crowd’, if a trick that every DJ appeared to be pulling (Warp night = End on Aphex…not rocket science). 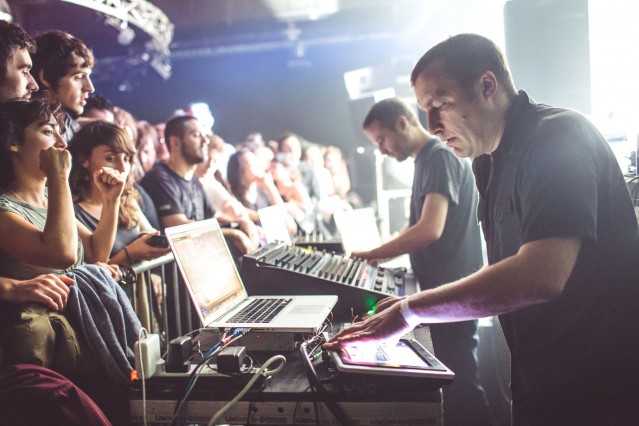 Plaid made up for the absence of drugs in my evening by playing beautifully. A short set (it felt), they strolled through most of the obvious highlights of Reachy Prints (minus ‘Liverpool Street’, presumably on account of the reliance on the contrast between acoustic and electronic elements) with a perfectly deconstructive approach. They aimed to make you feel hallucinatory by taking a riff, melody or rhythm, making it familiar, and then extending it until it fell apart slightly. Your head and body warps in time with the filters and effects and the general loosening of the mind. These are consumate performers, aware of exactly where the edges of the music are, and how far they can be pushed.

Every version was heart-bursting, culminating near the end with some moments of genuine melancholy in between the off-kilter beats and rhythms. This wasn’t ‘phoning it in’ Plaid, this was Plaid knowing their game, and its a game they’ve been playing for a while. The end was almost too abrupt, the luscious harp parts only being suspended in the air for a few moments before the rug pulls out and the show is over. They remain my highlight, despite the brevity, and the fact that once mashed and contorted, the bulk of their songs still sound a little samey (even with a return to form like Reachy Prints, I struggle to remember which track ties to which title). The elements are there though, and it’s never boring. The rhythms are still always intriguing, and the production is still superlative.

Wait, I was keeping it simple. I can move on.

Clark is something different. Where Plaid were building and expanding until things fell apart, Clark was actively honing and refining. My predominant memory is of a very simple brutal and overpowering drum line. Pure, brutal, unadulterated techno power. Were it not for technical issues, it would’ve been there almost constantly – occasionally shifting into a variant, and showing a wide range of textures for such a pounding beat, but still essentially just a rigid core of rhythm. Layers were heaped on top, but the key thing was the removal. Each addition was just something to be stripped back. It was a powerful hour of music, with little to distinguish one minute from the next, but a perpetual feeling of movement and… almost… narrative. I can’t believe I’m trying to say that his relentless drum machine told a story, but it felt like there was more forward momentum than there should have been. 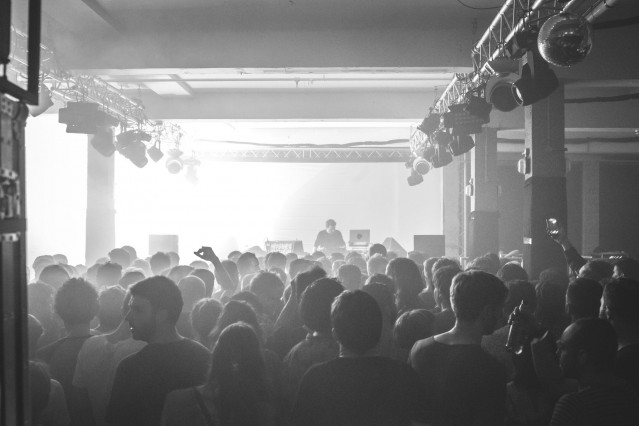 Of course, there was that technical difficulty. Sound cut out, along with the visuals, and it false-started a few times before he got everything back on course, and of course that had never been the plan. I’ve never felt the momentum tugged so hurriedly from something. Sure, it meant I had more space to fling myself around, but it also felt like the journey we’d been going on had been halted.

It’s frustrating for a night that will go down in my head as ‘the one with the best sound system I’ve ever heard’ to be marred by a technical difficulty, but the damage done by that dropped illusion was massive. Clark’s performance was otherwise faultless, but the spell was broken just a little bit, and in the absence of drugs to paper over the cracks, it was hard to get that back.

Perc picked up the pieces after Clark put them aside, and the relentless immensity of it was almost enough to keep me up and about on the wrong side of London (not a value judgement, just a distance from ‘bed’, I swear), but to be honest, I couldn’t take it.

I’m not made for this shit any more, apparently.

I fled into the rain, and eventually ended up hidden in a pile of curtains. It was fine though, because I’d had my ears, knees and heart blown out of the water by a succession of beautiful, powerful musics. It’s all I’ve ever asked for.

Oh, and it helps that Clark played ‘Growl’s Garden’ in the midst of all the pounding, because that’s a song that will repeatedly make your drop your guts onto the dance floor in the best possible way.

Ten out of ten, just for hearing that beautiful monstrosity on a sound system like that.

Fuck the criticism, just bend your fucking knees and wobble. 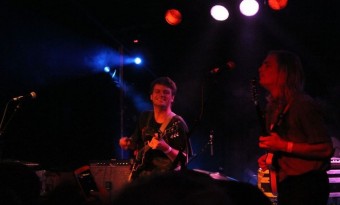 Mac DeMarco admits an aggressive Leeds crowd were "too much" as stage invaders split the crowd on his latest tour...
Read More