I remember when I was a yoot it seemed every film had a big pop star doing the theme tune (Jamiroquai’s Godzilla single anyone?). That seemed to die off after Nickleback did that godawful Spiderman soundtrack but fear not, dystopian teen drama The Hunger Games has brought it back, and with a bang. New Zealand dark popper Lorde has curated the soundtrack for Mockingjay Part 1, and this latest single is her own effort at adding a bit of a banger to the big screen. Lorde is by far the most interesting pop act around at the moment, and ‘Yellow Flicker Beat’ is a decent enough stop-gap between last year’s debut LP and the inevitable follow up. Despite feeling like more of an album track compared to the solid gold ‘Royals’, I’d take a Lorde album track (all melancholic beats, with insecurities displayed through the lyrics) over most people’s singles any day.

David Bowie – Sue (Or In A Season Of Crime)

As if Bowie needed to sell any more copies of the snorefest that is Nothing Has Changed, he’s released a ‘deluxe edition’ with some bonus tracks, this being one of them. The film noir stylings of the horns and reeds actually make this far more interesting than a lot of what that album exhibited, it’s just a shame Bowie seems so intent on warbling near nonsense over the top of it, and taking his fans for a ride by asking them to re-buy an album that wasn’t that great in the first place.

K-X-P – The History of Techno

K-X-P have been on the indie scene for some time now, their brand of psych-electronica being often loud and interesting, but perhaps not everyone’s cup of tea. ‘The History of Techno’ keeps them in this niche for sure, interloping rhythms and improvisational percussive elements (the band recorded it live) are underpinned by the remorseless techno beat. It’s decent enough and would definitely benefit from being played loud in a scummy club environment, I’m just not sure it’s epic enough to warrant the historic title.

Gallagher jumped the shark somewhere around Knebworth, although he’s nearly beaten himself again with ‘In The Heat of the Moment’, which starts with the band literally singing: ‘Na Na Na Na Naa, Na Na Na Na Naa’. The chorus is actually quite charming when we get round to it, as Noel croons, “I know in the heat of the moment… you’ll be by my side” through his nose. The rest of it is nuts and bolts Noel Gallagher fare, suitable for festival montages and giving Radio 2 a bit of edge.

There’s a worrying trend at the moment where people think sticking to a minimal composition and putting a ‘big’ ’emotive’ voice on top of it makes for a tear jerker-cum-epic tune. I’m not a Coldplay fan, but at least they can write a song. ‘Blood’ features all the constituents of a cry-wank, but doesn’t have the chorus to help bring about the climax. It repeats the same phrase for three minutes, just getting a bit louder each time, then disappears leaving you soppy and disappointed. A bit like a cry-wank does.

The video for this song missed a trick, because while it ‘Redefined Everything Ever’ if you’re a Guardian hack having to deliver a thousand words on deadline, what the song actually seems to be about is Taylor Swift claiming she keeps getting dumped because she’s a bit of a knife and chains gal in the bedroom. I would’ve loved to have seen an effigy of Harry Styles running, crying, out of Swift’s bed/dungeon/sex swing chamber with a massive dildo strapped to his face. Shame that one didn’t get past the label people. Also, Taylor, here’s the number of my mate Kier who loves that sort of thing: 0774-[Nope – Ed].

Slow Club – Everything Is New

Slow Club are more well-dressed and on-trend than a Dazed and Confused shoot in the latest video for ‘Everything Is New’. Luckily, the tune doesn’t succumb to same zeitgeist-aping Polaroid predictability. Instead the subtly building tune starts and ends as an intimate, country-tinged indie number, vocalists hushing their way through the words and harmonies while the intermission momentarily gives the whole thing a noisy, reverberated kick.

‘Succubus’ kicks in with a bassline so scuzzy I was half expecting a representative of the band to come into the room and spit on me just to add to the experience. While the band are keen to wear their influences on their sleeve (Nirvana, L7, Pixies, Teenage Fanclub), there’s enough genuine bile running through the record to think they’re eschewing the more ‘arena’ elements of those bands and sticking with the gritty good stuff. The pre-chorus line, “you need a love song you can’t have,” summarises the atmosphere. One to put on repeat.

The debut release from Hand In Hive is getting the capital’s latest singles label off to a big start. An example of effective, melodramatic romance pop with a chorus full of big hands-in-the-air synths as Ms Elste repeats the title with a falsetto swoon. A big ’80s romp with enough ‘cool’ production values to set her firmly in 2014. 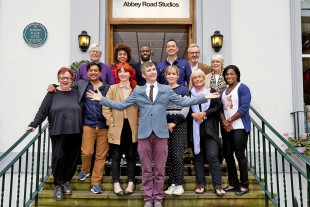 This week Nicholas Burman takes over the singles column to run the rule over the latest singles being paraded before the nation...
Read More