Chances are that, even if you’ve managed to avoid their music up until now (pretty unlikely in itself), you will have been introduced via some medium to the music of Haim this week. The sibling three-piece have been ubiquitous recently after an absolute PR blitz, which saw a campaign that’s been steadily building for around a year explode in an orgy of magazine covers and television appearances. Even political junkies tuning in to Sunday’s Andrew Marr show were subjected to a performance of recent single ‘The Wire’ (see below). Dedicated to the watching David Cameron, it was a far cry from PJ Harvey singing about British soldiers splashing about “in the fountains of death” to an uncomfortable Gordon Brown in 2010. Still, a cringeworthy shout-out that might’ve seriously damaged another band’s credibility barely registered a blip as the Haim juggernaut cruised on. Will debut album Days Are Gone hit number one on Sunday? You wouldn’t bet against it.

The fact Haim are signed to Jay Z’s Roc Nation management group may have something to do with their success. Ol’ Hova pulled off something of a masterstroke himself in July, managing to sell a million copies of his Magna Carta Holy Grail album before it was even released, after striking a $5m deal with Samsung that saw the album given away to users three days early. The rapper has always been shrewd when it comes to such partnerships (check out his list of endorsements here), but even for him this was something of a coup – an album effectively going platinum before most people could even buy it. And while Mr. Carter may have railed against Billboard a while back for not including those figures towards the album’s chart sales, he’s still shifted around a million copies since. And while the churlish may say it speaks volumes that Jay Z’s only innovations these days are financial rather than musical, there’s no doubt that the Samsung deal, alongside publicity stunts such as performing for 6 hours straight in an art gallery, helped keep his sales looking healthy despite a lukewarm reception from critics.

While Jay Z’s pre-release giveaway also helped negate the inevitable album leak, his pal Kanye West opted for “no strategy” leading up to the release of his Yeezus album. “This whole process is all about giving no fucks at all,” is how West explained the reasoning behind the lack of singles, music videos or pre-order facilities before Yeezus dropped. “I’ve got an idea on how to sell more music”, he revealed. “It’s called make better music”. Yet while Yeezus does have a claim to being his most fascinating album to date, and, conversely to Magna Carta, had the critics purring, it has thus far sold poorly in comparison to previous releases. Perhaps this is the reason why we have recently seen more concerted PR from West, culminating in last week’s compelling, hour-long interview with Zane Lowe. Still, if he’s short of a few quid he can always flog a few more plain white t’s (or even better, flog Plain White T’s. With a belt).

Apparently, simply making better music is not enough. Yet overly focusing on marketing while neglecting the actual product is just as foolhardy, as Johnny Borrell found out to his cost this year. His debut solo album, Borrell 1, only mustered a Metacritic score of 49/100 and was described by The Guardian as sounding like “the inner workings of a brain as it descends into total madness”. Subsequently, despite a big media push and Youtube campaign, it sold only 594 copies on the first week of its release, failing to break the UK Top 100. We’re not expecting Borrell 2 anytime soon, although his label seemed to see the funny side of it…

The Strokes went one step further, foregoing both decent marketing and decent product earlier this year. They opted against touring latest album Comedown Machine and did few promotional interviews; perhaps a smart move considering guitarist Nick Valensi had publicly described sessions for previous album Angles as “just awful” and “a disaster from the get-to” last time around. While the album still went Top 10 in the US and UK, it is currently their only album not to be certified gold in any region. Quite the Comedown.

Two of the year’s biggest successes ran entirely different campaigns. News of Daft Punk’s biggest selling album to date, Random Access Memories, started filtering through almost a year before its release, and the hype was massaged by television adverts, the leaking of guest appearances, and even the temporary sponsorship of a Formula 1 team. In contrast, David Bowie’s return to music at the beginning of the year came with no warning whatsoever. Music journalists, for once completely out of the loop, responded with something approaching delirium when a new single dropped unannounced on January 8th alongside details of a forthcoming album. No need for any interviews or a world tour – Bowie was immediately bigger than he had been for about thirty years.

Of course, hardly any acts have the fanbase needed to pull off such a stunt. Yet plenty have managed to build anticipation using both traditional and guerilla marketing methods. With a number one album and two number one singles, Rudimental have been one of the year’s biggest successes, a sudden rise that has been vastly helped by their eye-catching music videos going viral (the band were nominated for three British Music Video Awards this week), not least a Peugot tie-in featuring famous street dancer Nonstop that racked up millions of Youtube views.

However, a campaign has to fit in with the act’s profile. A good example this year came from reticent electronic duo Boards of Canada, whose release of Tomorrow’s Harvest was preceded by a cryptic series of codes found on Youtube videos and one-off 12″ records hidden in independent record shops (a campaign similar to Nine Inch Nails’ impressive Year Zero alternate reality game). By the time the record was live-streamed on their official website, the hype was such that the site immediately crashed.

Even new bands have managed to create a similar effect. The xx launched a celebrated poster campaign in 2009 consisting of a simple, unexplained ‘x’, and took to leaving gaffa taped ‘x’s at festivals they played at; an exercise in enigmatic understatement that chimed well with their image. For their follow-up album, Coexist, they pulled another neat trick. Releasing a pre-release stream of the album to a single superfan, they then tracked its movement across the globe as it started to be shared between other listeners. It not only looked pretty, but also helped them gain a few column inches in the run up to the album’s launch. Sadly, the campaign turned out to be more interesting than the album itself… 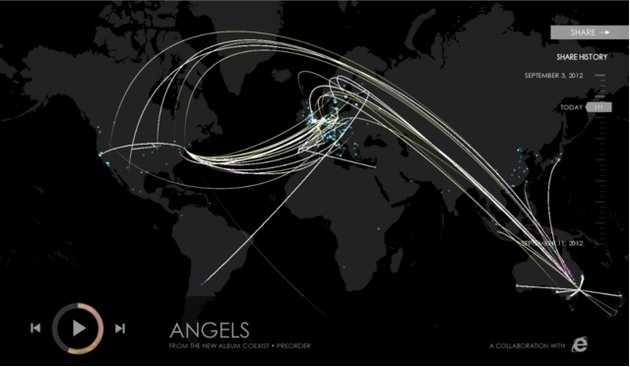 Recently Arcade Fire have been trying to combine pretty much all of these techniques, as they prepare to release new album Reflektor at the end of this month. Guerilla marketing campaign on the streets / at festivals, featuring a mysterious symbol? Check. New album information revealed to one single fan? Check. Viral music video? Check. David Bowie? Check. However, not everything has gone to plan so far, after some of their street team started spray-painting their symbol onto shops rather than using nice, wipe-clean chalk. It’s not quite as bad as Roger Waters defacing Elliott Smith’s memorial wall, but it did get at least one Arcade Fire fan extremely irate…

It’s a reminder that, no matter how well-planned a campaign, it only takes one slip-up to turn it into a PR disaster. Competitions are all well and good, but be wary of going overboard, like rapper Plies did a few years ago. An ipad? OK. An appearance in a music video? Cool. Dinner with the rapper at a 5* restaurant? Not as creepy as 30 Seconds To Mars offering fans a night in Jared Leto’s bed, so carry on. However, by the time you’re offering your fans healthcare insurance, mortgage debt relief, and an attorney for a wrongly accused family member, you’ve probably gone a touch too far. When you’re also giving away your own dog (a tea cup yorkie puppy, no less), you’ve definitely gone too far. Then again, Marnie Stern’s record label ran a competition to take her on a date earlier this year, and that seemed to go OK. Not in terms of album sales particularly, but they got to a second date.

Similarly, while social media can be a peerless way to boost your profile (Amanda Palmer’s masterful use of Twitter to help her raise over $1m on Kickstarter being a perfect example), it can also go very, very wrong. You probably wouldn’t imagine Susan Boyle’s fans being particularly techno-savvy for instance, yet her PR team’s 2012 hashtag campaign got loads of attention; although not the sort of attention they were looking for. The reason? Well, not realising that their chosen hashtag, #susanalbumparty, looked like something you might find in a Viz wordsearch didn’t help.

Perhaps the stupidest of all publicity stunts occurred in 2010, when the hip-hop trio Imperial Stars (us neither) decided to promote their single ‘Traffic Jam 101’ by, er, causing a massive traffic jam on California’s 101 Freeway. They stopped their truck in the middle of the road in order to perform the track, enraging commuters and swiftly getting themselves arrested. They tried to salvage some positive PR from the event by announcing they’d be donating all money raised from sales to a homeless charity. We suspect that amount was somewhat less than the $40k fine they earned after being found guilty of conspiracy, public nuisance and obstructing or delaying law enforcement officers. The twats.

Kill Yourself Dancing - An Interview with Miguel Garcia 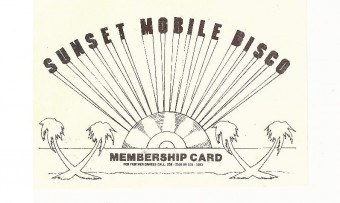