Maybe being tucked away to the bottom left of the country and not having to contend with many surrounding cities, leaving it to develop its own identity and community, is the reason Bristol always feels so refreshing. With the numerous communities mingling into the melting pot, it has one of the most diverse and exciting music scenes in the country, and with Simple Things, it also has one of the best inner city one dayers.

Arriving around midday the first stop was picking up our passes from The Christmas Steps, the home of Crack Magazine. The city’s latest drinking hole is thankfully a proper boozer and not some identikit Ikea cocktail bar. After that we quickly bolted up to Colston Hall (the multi storey theatre and arts space) to catch local band The Fauns – Simple Things 2014 was a rare occasion where the ‘local talent’ was one of the big draws of the weekend, and the ‘regional’ bands more than weighed up against the bigger out of town names. Despite being personally bored to death of shoegaze, The Fauns’ textured sound worked wonders on my sleepy head mainly because the band can actually properly play – technicolour soundscapes launched themselves around the theatre; the half seated venue was a space which really worked for the cinematic sound. Let’s say I had more fun watching them than I did the Slowdive reunion earlier in the Summer. Just round the corner in a side room another set of locals, Scarlett Rascal, followed up with a more New Wave approach. Frontman Luke Brooks loved giving a good pout, and delivering his lines like Mark E Smith doing a Lou Reed impression. 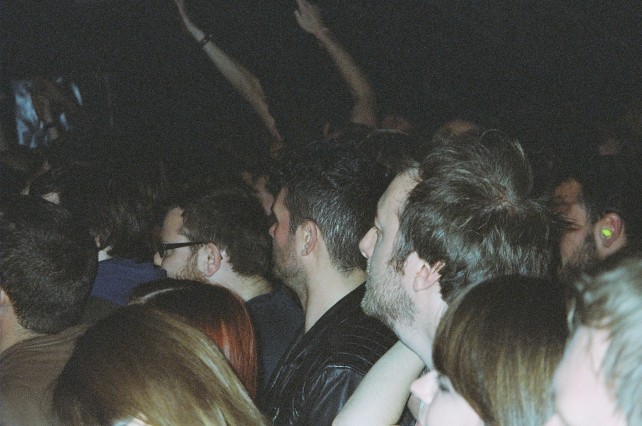 The Firestation is a relatively basic space, although (along with pretty much all the venues throughout the day) sounded big. Redinho’s debut recently came out on Numbers (the Glasgow based label which has previously spawned Rustie), but I hadn’t really heard much about his live set up. Thankfully we found him in Prince covers mode – keytar and vocoder at the ready. His grime and trap inspired 80s synth-a-thons are a lot of fun, and in a relatively uptight musical climate much needed. Flash forward a couple of hours later and his label mate SOPHIE was less so. Being a fan of ‘Blipp’ I was open minded for a fun but extravagant set – unfortunately it just wasn’t entertaining. He’s like a guy at the party who goes on about how much more about a niche genre he knows than you. Fans of PC Music say, “it’s good because it’s not really been done before, and no one knows how to respond to it.” Well to that I say: a) everyone afterwards pointed out it sounds like hardcore, which has definitely already happened and, b) if you’re at a dance night and you can’t dance to it someone’s doing it wrong. Sorry SOPHIE, maybe less showing off and more tunes next time yeah. Turning around whilst queuing for the portaloos and everyone noticed a primary school aged party watching the tinnie swigging crowd through an adjacent window. They probably would’ve enjoyed SOPHIE more than me. 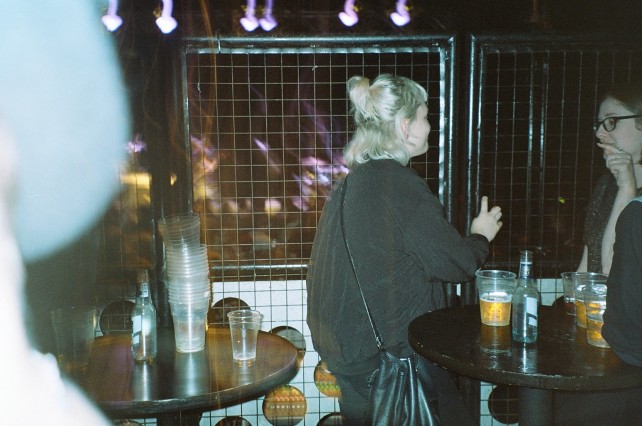 In between those two we caught Oliver Wilde, easily Bristol’s current most favourite son, whose two albums have been released on the Bristol based Howling Owl Records. This gig saw him singing without effects on his vocals which gave the show an intimacy which really complimented the heartwarming (or heartbreaking, depending on the tune) lyrics. His band has grown a little, and create a swirling, folky The Mamas & The Papas wall of sound, with hip-hop beats kicking in intermittently. Real emotional stuff, the city should be proud. 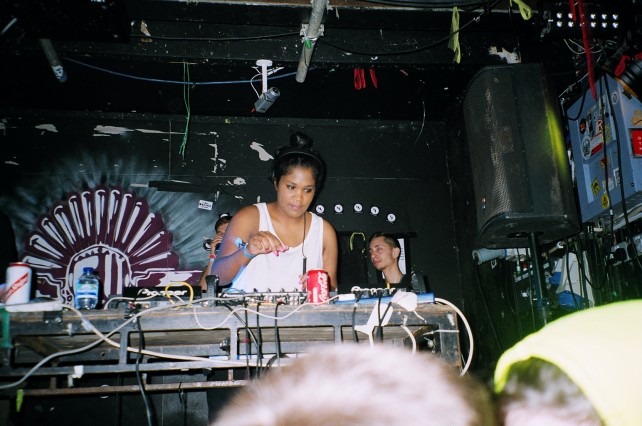 After a pit stop at the emptiest bar in Bristol for a £5 pizza we wormed through the Black Lips crowd to Academy 2, the awkwardly placed venue at the top back of the 02 Academy. Not that this put people off building up to witness Howling Owl Records head honchos and recent Sonic Cathedral signings Spectres bring the noise. And bring the noise they did. They’ve gone from being a more soundscape-y At The Drive In to bone fide, ear splitting, visceral post rock. The bass rumbles through your chest like someone’s applying constant pressure and after twenty minutes you’re not certain if you can actually hear anything anymore. Luckily it works on more of a level than just being rowdy – the song structures constantly build up to keep you as mentally engaged as well as physically respondent. See them (at your peril). 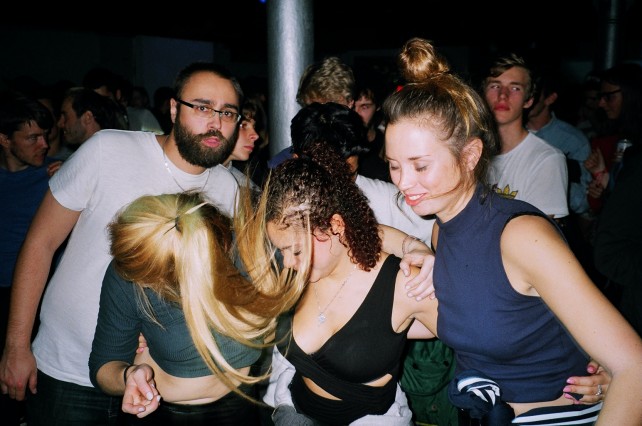 Main arena time, and it was time for Death From Above 1979 to do their come back thang. DFA1979 are the sort of teenage angst, meat and two veg rock’n’roll I thought people stopped listening to after the age of seventeen but by the level of the crowd response I guess I’m somewhat alone in this. We do also live in a world where Royal Blood have had a number one album, so… Maybe it’s because missing them the first time round I don’t hold any nostalgia to the tunes, but DFA were by far the least interesting act I saw all day. Saturday was a day best left to the upstarts. 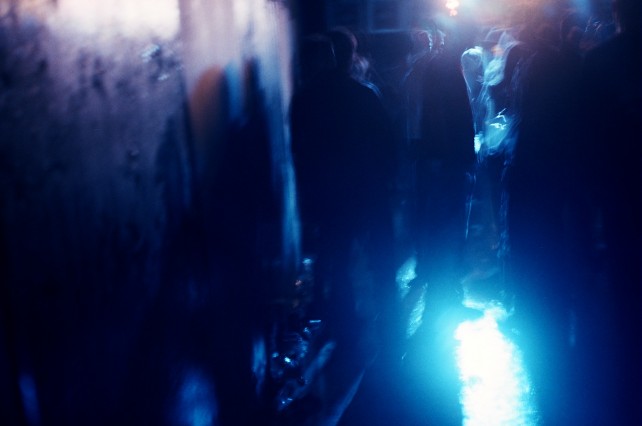 We couldn’t actually find the venue we were meant to be seeing Actress and Zomby in, so we entered Lakota to catch Cooly G and Kode9 (details not a strong point from here on in), no doubt continuing Hyperdub’s 10th birthday celebrations. Upstairs in room two Admin (another local producer) was spinning some fun house tunes with saxophonist Matthew Naybour adding some colour to the set – this was apparently a bit of a spontaneous addition to the set but added a bit of a party atmosphere while footwork tunes battled with the audience downstairs. People mingled in between the four floors – Simple Things brought together one of the friendliest audiences I’ve ever been in – and the night faded away on a high. Me and a mate left mapless, finding our Airbnb accommodation by retracing the bus route we’d got into town by foot, the sound of Spectres and Simple Things still ringing in our ears ’til Monday.

Check out info on other Simple Things events, including the sister event in Glasgow and an upcoming The Bug show in Bristol, over on their site. 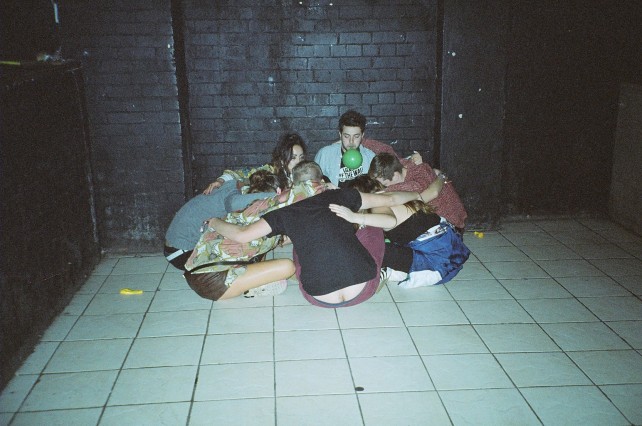 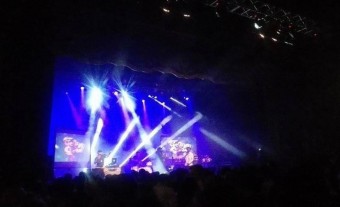 Nightmares On Wax invited a whole host of their Warp, Stones Throw, Ninja Tune and Brainfeeder mates along to celebrate their 25th anniversary in style...
Read More