Oh Death From Above 1979, how I loved them. Their 2004 debut album You’re a Woman, I’m a Machine was a brilliant mix of pummelling, dirty bass riffs played with a thrashy, couldn’t-give-a-fuck attitude. It was hooky but heavy with a bass that sounded like it had been rammed into an indie kid’s skull by a very nasty robot, one which had been raised solely on broken heavy metal vinyl played at high volume through a totally knackered set of busted speakers.

It was a ferocious and intense record which didn’t let up and was all the better for it. When they split up I was sad, but could understand. They knew their limits.

When they re-formed for some live shows in 2011 I was there, and man alive was it cracking. It was the second time I’d seen them and it was just as good as the first. My gentle fingers were crossed for new material…

Then I heard the new material – ‘Trainwreck 1979’. It sounded just that, a train wreck. I don’t mean that as some gnarly metallic metaphor like with the robot one above. I mean it was shit.

It starts off well enough, with the trademark DFA 1979 bass kicking in, but soon descends into some sort of Maroon 5 disco-falsetto atrocity. A horrible ‘woo-wooing’, shit-glam fuck-punch to the ribcage of goodness.

The disappointment was crushing. So, when the full album The Physical World was released I approached it with due caution. Soft human fingers still burned from the train wreckage, I picked my way through the tracks and bunged the new album directly into my vulnerable ears.

You know what, it starts off alright. Maybe ‘Trainwreck 1979’ was an anomaly, a cheeky misleading first single to get the kids interested before whacking them with the real hard stuff. ‘Cheap Talk’ kicks off with what sounds like the now trademark DFA 1979 fuzzed out bass riff. It seemed normal service had been resumed. We’re on a safe carriage, the journey has commenced and everything will be OK.

Or so I thought. Soon my enthusiasm had halted and I was held at a signal, a grubby red light made out of pretty much everything else in the song, totally destroying my Zen attitude. It’s the equivalent of having your pleasant train ride ruined as a pissed up suit comes and sits next to you, falling asleep on your shoulder and dribbling into your crotch.

Maybe it’s just me. Maybe I’m just an old fuck-wit who no longer likes a catchy chorus in my rock music. I’d say if you like the Foo Fighters and Muse then this might be right up your street. It’s just not up my piss-stenched, binbag-addled cul-de-sac I’m afraid.

Unfortunately as the album progresses this sinking feeling gets worse. To my beer-embalmed brain the vocals, drums and synths all sound like Good Charlotte or one of the other fuck-knuckle awful ‘pop-punk’ bands that emerged from the shameful plasma of the late nineties.

It’s all so clean sounding, so clinical. The bass no longer distorted and powerful, it doesn’t have the same sense of danger or relentless heaviness that You’re a Woman, I’m a Machine had. The songs are far too dominated by dance-pop leanings.

Sitting on the tube-train (an actual one, not the metaphorical one I’d confusingly constructed earlier) I feel physically ashamed that someone might think I was listening to fucking Green day. Seriously, sodding Green Day. The only hints of light in this very dark environment are emitted by the noisy crunch of ‘Government Trash’ and ‘Gemini’, which mildly alleviates the crowded and sweaty carriage of the lingering smell of cheap business suits.

Listening to The Physical World has, as you may have gathered, left me with a confusing and not often felt sense of anger (I’m usually so level-headed right?). It’s no You’re a Woman, I’m a Machine, which shouldn’t have been an issue. Part Chimp’s excellent Thriller isn’t the same as the brilliant I Am Come. A great record is a great record. I appreciate that comparing the new to the old can often only end in disappointment, but my disappointment is fully borne from listening to this album now, as its own entity. If I’d heard The Physical World would I like DFA1979? The answer is no.

Ultimately The Physical World contains the same sense of sadness and disappointment you feel when seeing a dead pigeon, red and flattened, lying motionless on a grey concrete street. Only on further inspection it’s not actually a dead pigeon, it’s actually a burnt plastic bag filled with human shit. And you already trod in it a few paces back.

Oh, Death From Above 1979, you’re still stuck in the treads of my shoes, but now sadly I’m inclined to scrape you off. Well, maybe let’s give it a few more steps… 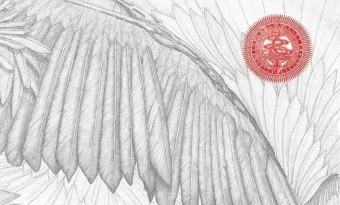 Kevin 'The Bug' Martin's long-awaited follow-up to London Zoo has had the critics drooling - but does it suffer from too many angels and not enough devils?
Read More