She the First Lady…

I don’t feel remotely qualified to write about this. I don’t know the underground hip-hop scenes of New Orleans or anywhere. I don’t really have the vocabulary or ass to explain this or twerk to this… but I have to try, because it’s one of the hottest records I’ve heard this year, and I can’t let it slide. And I’m fucking terrified that people think twerking is something Miley Cyrus does, when there’s only one Queen of Bounce.

About three years ago I bumped into a friend, and she was raving at me about New Orleans Bounce and Hip-Hop, and how it was the best thing. Apparently Sage Francis (or his DJ) had played some at a gig, and she’d been looking into it, and wanted more, and wanted to get some of it down to Brighton. I listened, and I promptly forgot. It took a load of articles about twerking around the time of the Miley Cyrus nonsense and the greatest music video ever made (below) to make me realise what I was missing.

New Orleans Bounce music seems almost blunt. It’s got a real addiction to sharply cut, brutally short loops. It’s a few pounding rhythms overlaid with intensely repetitive refrains. It feels angry and excited at the same time. It is so clearly built for shaking ass to. You don’t need to call a song ‘Azz Everywhere’ to know where this music is focussed.

A lot of it is also cut together in such a homemade way, that I can imagine most people being immediately turned off. That brutality is real, it’s an assault on the ears.  There are hour long mixes online that just feel like the same drum line, cycling between a few different hooks. I sometimes feel sorry for my neighbours. It appears built to have something laid over the top, but the spitting isn’t varied. It’s still that repetition that is the key. A rap will consist of a vocal motif repeated and bounced between often enough for it to feel more like a tic than a lyric. It feels rough and uncompromising.

But it’s beautiful. And I’ll be straight with you here. Big Freedia’s Just Be Free is not rough, but it is uncompromising, and it’s bloody immaculate.

All the bounce hallmarks are there. But it’s so much richer and more refined than I ever expected. Yes, a record that includes the words ‘wiggle’ and ‘wakka’ looped for sustained periods is refined. The Bounce formula is rigidly applied throughout, but there’s an ear for production here that makes everything hang together in a way that should be accessible to all. Not just accessible, but irresistable. The ability to slide so many great melodies, structures, and movements into such a simple spine is incredible. There are LAYERS here.

And then there’s the Queen herself. Freedia’s charm holds everything together, moves everything forward, and brings everyone into the beat. She is gorgeously unforgettable. It doesn’t matter how simple the vocal tics are, it doesn’t matter if she’s singing out of tune, shouting at you to let go, telling you she’s dangerous, ululating, or providing an emotive harmony. Freedia is a charmer, pure and simple. She will call, you will come.

Freedia’s voice is expressive, explosive and wonderful. But it’s not the voice that matters, it’s the editing of the samples that is the key, and there aren’t enough superlatives for how masterful that is. Each piece of lyric is sliced, looped and plaited together until words have become movement. In the same way I praised Aphex for turning effects into rhythms, Freedia turns words into rhythm, harmony, structure and movement. It’s strong.

I’m drawn to the Bounce scene by the queerness. There’s something exhilarating about being able to dig into all the queer hip-hop that’s bursting out at the moment. It’s fucking great to be reminded that hip-hop and its myriad siblings provide a tool set for self-expression to everyone, not just the hypercapitalists of the mainstream. To hear the sounds of a scene that has built its own methodology for expressing itself and coming together: it’s freeing. It’s something I can identify it, despite it coming from a place and circumstance so distant to mine. This record feels like a bit of that scene reaching out. One of its prime proponents, at the top of their game, reaching out and telling everyone to be free, get moving and revel in this beautiful, beautiful expression of excitement.

I still worry that my fumbled drunken attempts at twerking represent a form of cultural appropriation rather than respect. Freedia makes me need to do it though. She provides a rhythm and a mindset that drives me wild, and makes me want everyone else to feel that feeling. When she tells me to ‘Jump On It’, I want to, and I want everyone else to do it to.

Album opener ‘Turn Da Beat Up’ is as good a place to demonstrate the appeal. The simplest of vocal lines loops and twists alongside one of those Adam F/Kaos filmic horn stabs as punctuation, with a beat that just loops and pushes forward. It’s the perfect rhythm to move to, and the voice, just a load of dancing clichés tied together, looped, squeezed into odd pitches and wrapped around each other. It’s got it. It drives relentlessly, it slams into your heart, it doesn’t want to be understood, it just wants you to move, and like the whole album it stops before you’ve had enough.

‘Jump On It’ is an absolute highlight. A huge bass drum and a little clapping gets us started, a vocal sample, some playground chanting, then the proper beat kicks in, and so does Freedia. The rest of the track is just various patterns looping around that insistent, pounding bass drum and its accompanying bassline. It doesn’t let it get boring though. It mixes textures beautifully. “Jump on the booty, cause the booty got to jump, shake your rump-a, shake you’re rump-a.” That’s what it says. That’s what it does. Breakdowns, variations, bridges, middle-eights, all around a fundamental pounding rhythm. It’s multi-layered, deep and rich in a way that you might not spot if you don’t take the time.

Hell, it doesn’t want you to spot the detail, it just wants you to jump on it. Lower in the mix, the entrancing synth rhythms, the gentler brass hooks, they don’t want you to listen, they are just there to make you jump on it. Harder.

‘Maybe try that one again?’ Freedia asks at the end, after another abrupt, too soon ending. You probably will. You’ll want more. you’ll jump back. How could you not.

The whole album is full of these details. These little artefacts buried underneath the apparently straightforward exterior. There’s so much going on here, not least an incredibly strong sense of harmony. Vocals are wrapped around each other, married perfectly to boistrous synth pads, random instrumental breaks and pitched drum loops. It’s gorgeous. It’s a party record, focussed directly on making bottoms move, with a depth so welcoming that it’ll work.

At the open of the second side, Big Freedia will tell you she’s the old lady. She’s the first lady. She’s right. She’s the only lady. She will make a solid and convincing case for being the lady that invented both wiggling and shaking. And she’ll do it with breakdown built around a chord sequence that sounds like it’s from an eighties fantasy film. “I don’t even know why, but I’m the Ol’ lady,” she’ll say. You won’t know why, but you’ll love it. I promise.

If you don’t, then something’s missing. I don’t know if it’s soul or azz, but it’s missing. You should do something about that.

I quite like this record. You should buy it, turn it up loud, and move the hell out of your body.

Maybe try that one again.

I certainly fucking will. 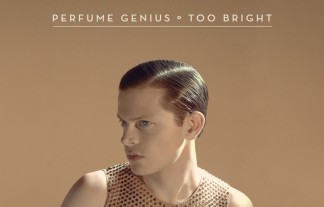 Hadreas is taking on any ignorant bastards that still hold terrible homophobic views, throwing their hideous stereotyping right back into their faces.
Read More