Let me get straight to the point, this album is wonderful. Right, bloody wonderful. It’s like ascending into the crisp star-filled night sky, riding atop a black glitterball cloud and finding an unlimited bar – fully stocked and ready and waiting for abuse.

If you’ve listened to Perfume Genius’ previous albums, Learning and 2012 breakthrough Put your Back In 2 It, you’ll be familiar with Mike Hadreas’ honest, soulful piano based confessionals. Intimate and yearning – the songs are gentle and brittle, like delicate autumn leaves on a busy city pavement at lunchtime. The songs sound like a cry for help, an exploration of sexuality and acceptance filtered through the voice and fingers of an emotionally frail young man.

On Too Bright, Hadreas throws off these past musical inhibitions and embraces a broader more electronic sound. Lyrically he’s no longer looking for acceptance or understanding through his music. This is a defiant, gloriously confident album. If former battles had previously made Hadreas withdrawn and inward facing, here he turns his attention to the outside and he now performs with a gutsy swagger and sway.

The album begins with the elegiac I Decline, a gentle piano-led diamond – classic Perfume Genius – which instantly sucks you into Hadreas’ sensitive, dreamy world. The simple minimal instrumentation allows his voice to soar and seduce. It has the quality of feeling totally direct, as if he’s whispering gently into your ear: “I can see for miles the same old line”. At first carrying a sense of disappointment the tone then turns to defiance: “Angel just above the grid, Open, smiling, reach out. That’s alright, I decline”

It contains far more fight in its short two-minute life span than an entire Curry’s shop window full of televisions exclusively playing Twisted Sisters We’re Not Gonna Take It on repeat for all eternity. I Decline is followed by the fucking brilliant synth-led, glam of lead single Queen. Traditional piano is replaced with menacing electronic shrieks and stomping fuzzed out bass beats, it’s like a multi-coloured version of John Carpenter ‘s Escape From New York.

Here Hadreas is taking on any ignorant bastards that still hold terrible homophobic views, throwing their hideous stereotyping right back into their stupid Jeremy Clarkson loving faces: “Don’t you know your queen, Cracked, Peelin’, Riddled with disease, Don’t you know me.”

It’s brilliantly antagonistic and features possibly my favorite lyric of the year: ‘”No family is safe when I sashay” Totally summing up the fuck you attitude Hadreas has adopted, sexual and threatening. It’s a case of: if you think I’m a monster, then I’ll be a monster – and what a beautiful monster he is. There’s a newfound confidence erupting amongst Queens’s glacial synths and it’s a joy to sashay to.

Next is the lovely finger-clicking soul brilliance of Fool. A cracking groove softly pushes the song along as Hadreas gives his vocals the full lush-romantic treatment. It’s like wrapping yourself in your favorite overcoat on a cold winter’s day.

The songs are full of ethereal warmth even when expressing the most melancholic bleakness, “Don’t let them in, I am too tired to hold myself carefully” he sings wearily on Don’t let them in. The sadness is never oppressive or self-wallowing. Simply open, honest and soul bearing.

My Body, Grid and Longpig continue the dark electro menace of Queen with pounding bass and electronic pulses. The lyrics of Grid refer back to opener I Decline: “I can see, see for miles the same old line” but now “there is no angel above the grid”. The music suggesting that Hadreas has moved on, same world different Perfume Genius.

It also contains this absolute cracker: “A diamond, swallowed and shit, then swallowed again. At least we know where it’s been,” like some form of confusing alchemy. This is an album filled with visceral images and the pains of physical abjection, being trapped in a body that can only let you down.

The album ends with the beautiful trilogy of I’m a Mother, Too Bright and All Along and leaves you with a sense of warmth as if you’ve had a conversation with someone, now a dear friend, who has finally found the secret to happiness, which may simply be accepting yourself, with all your faults and quirks. In Mike Hadreas’ case this creates Perfume Genius and Too Bright.

Now let’s get back to that unlimited bar. 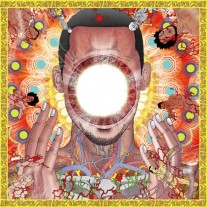 Steve Ellison, otherwise known as Flying Lotus, has never been one to settle for defining the norm, but is You're Dead! too weird?
Read More