Do you like your stoner metal to come with extra added riffs? Do you like fish and other sea-dwelling creatures? Does the idea of these two relatively disparate things coming together excite you?

Well then you’re in luck today my friend, with the premiere of noisy London-based metal bastards Strauss’ new video for the bass-heavy riffathon that is ‘2015’, taken from their excellent, recently released 2nd EP: Luia.

Luia was recorded and mixed by the fantastic Wayne Adams at Bear Bites Horse Studio in January this year and unveils five savage new chunks of gleaming metal flesh, pierced with sharp hooks and riddled with twisting melodies. Alan Douches, who has previously worked with other lovelies such as Kvelertak, Chelsea Wolfe and Mastodon, also mastered the EP.

The video and all of its fishy footage, created by director Peter Jones and producer Luke O’Dwyer (of The Monitors infamy), was filmed totally from scratch across several hot, sticky nights and is a murky homage to the good old days of b-movie horror and the utter wickedness of aquatic life.

Though no fish were harmed in the making of this video, the crew did have to witness a near naked Frenchman writhing about on the floor, which is mentally quite disturbing.

Watch it, you may never look at your bag of fish ‘n’ chips the same again. 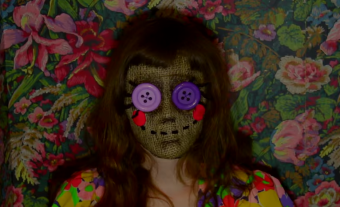 With his head hidden by a burlap sack, Albert Bagman is the latest idiosyncratic artist to emerge from Baltimore - and we're proud to premiere his charming new video for 'Cliché'...
Read More