It’s a Wednesday and we’re in ‘Trendy Dalston’ waiting for Archie Bronson Outfit. Tonight’s fun is in the interestingly-named Total Refreshment Centre, which was a right arsehole to find. Why can’t ‘Trendy Dalston’ understand the importance of bloody signage? How the fuck am I supposed to know where I’m going, aye?

Nonetheless, the building is all art-space white walls, snazzy psychedelic light shows and cans of filthy Red Stripe. Beggars can’t be choosers though. You see, this evening is a secret gig, with tickets having had to be won like Charlie and the Chocolate Factory through some clandestine lottery. My friend was the lucky Charlie and I his doting grandfather. Except less old, less supportive and in no way related.

Whilst chucking down my umpteenth can of ‘refreshing’ Red Stripe I notice something other than my overbearing anger and shame. Something that rattled me to my (very rotten) core. There are beards here. Many, many fucking beards. Taunting me with their thick lushness. Why can’t I grow a sodding beard? Maybe I just don’t belong on a night out in ‘Trendy Dalston’. On a Wednesday. I don’t wear lumberjack shirts, turned-up trousers or trucker caps either. I just won’t. Not for you ‘Trendy Dalston’, not for anyone.

Archie Bronson Outfit all have beards. Their fans all have beards. Even those dewlling outside of ‘Trendy Dalston’ come with beards as standard. Whether tucking into their late night cream cheese bagels, or tapping their feet to obtuse freeform jazz, whatever they’re doing, they have beards on their faces.

I don’t and I can’t. And I must live with that forever. Or drink till I forget. 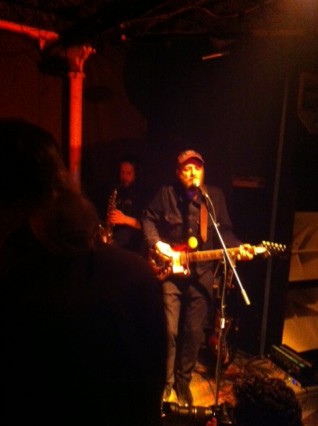 Archie Bronson Outfit don’t judge me though. Well, maybe they do and they just hide it very well beneath the beards. You can never be sure.

They plough through their set totally disregarding my lack of facial adornment. All without even looking me in the bald-faced eye once. Heads are down and songs of fuzzy, blues-tinged wooziness stagger around the room and bounce off the artless brick walls. My ears are clear, free of extra boat race barnet, and I tell myself I can absorb the music better than all the beardied ear filterers in the room. Take that ‘Trendy Dalston’.

Songs from all three current albums (‘Fur’, ‘Derdang Derdang’ and ‘Coconut’) and a few from the soon to be released ‘Wild Crush’ are fizzed out through the night to head-nodding approval. There are stompers. ‘Cherry Lips’ and ‘Dead Funny’ march and trample over the heads of everyone stood at the front. ‘Magnetic Warrior’ jutters and splutters, writhing like an electric eel left on a dirty toilet floor. The singer cautions us: “Don’t let yourself fall apart”, a warning that an elderly gent wholly ignores as he flails about in joy like a happy Ian Curtis. To a lesser extent I do too. Though much, much lesser. I am wearing corduroy after all.

The singer’s voice is so delicate and gentle that it makes me worry. Not a booming Brian Blessed beard eruption, forced through blues rock scuzz, but a small yelping warble; A small yelping warble wrestling its way out of the bearded hedgerow of the mouth, clamouring over dangerous teeth. Perilously sucked back in with each inward breath, yet continually trying to escape the entangled vault of the singer’s throat with every chance it can get. It’s strangely beautiful. And totally unexpected. 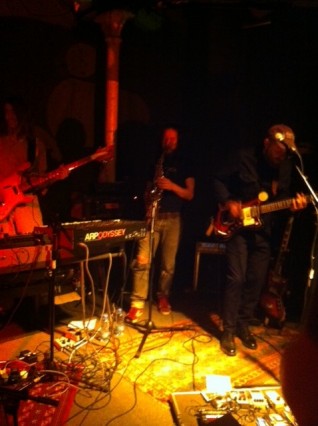 The music is loud, driven and encased in a psychedelic fog, yet the yelped vocals give everything a human feel. New song ‘Two Doves On A Lake’ gets everyone cranked up and cheering, while ‘Kink’ has a beery swagger that gets the place moving. Like The Fratellis if they weren’t totally shit. Which they were, are, and always will be.

The drummer pummels like a fiend, kicking out the jams, the marmalade, and any other sticky fruit reduction that might gum up the facial follicles.

Bass fights for its place with the keyboards in the long-fingered hands of the un-bearded member hiding at the back, looking suspiciously like a long-haired Alan Alda. Every now and then there’s a whack of sax, just to take the edge off.

The night ends with a song of which I have no fucking idea what it was called, nor could I hum it to you now if you asked me to, so don’t bother. But it was ace. Like a forgotten Britpop song, leaving a nice big smile on my miserable bloody face. And you know what? Everyone can see it too, because I haven’t got a beard. So I think overall I’m the real winner here. 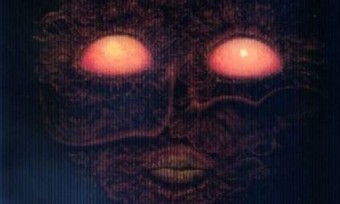 We take a pew with the leather-clad, ale-quaffing vicars of East London, to worship at the doom-jazz altar of Bohren & Der Club of Gore...
Read More