Who are Maximum Joy? Up until about a month ago I wouldn’t have been able to tell you. However, since the announcement that they´d be reforming for this year’s Simple Things festival the Bristolian post-punk five-piece have come back into view.

To be fair, they couldn´t have timed it better. It’s 2015, and the high kings of the genre Public Image Ltd have released a new album, Viv Albertine has pubished a book (so much of The Slits´ jerky reimagining of Northern Soul records is prominent in Maximum Joy’s work too), and The Pop Group, with whom Maximum Joy share a one-time member in the form of John Waddington, have been on the festival circuit as well.

Formed in 1979 by vocalist Janine Rainforth and saxophonist Tony Wrafter, alongside later arrivals Dan Catsis (bass), drummer Charlie Llewellin and Waddington, the band existed for a brief but energetic three years before splitting. Listening back now it’s a shame they haven’t been more prominent before, as they summarise a lot of that period’s most notable achievements, from the idealist lyrics of ‘Why Can´t We Live Together’ and ‘In The Air‘, to the amalgamation of reggae, funk, dub and punk in their music (be sure check out their 1981 Peel session if you have a spare lunch break).

You can even hear the early sparks of the likes of Bronski Beat in their tunes, or The Stone Roses at their most fluid – just all with a little more sax. Most fans thought they’d never reform. Nor did Rainforth, who even said as much in August, erm, 2015.

In anticipation of their upcoming appearance at Simple Things and gigs in London and Preston this October, we caught up with the band over e-mail to talk Disco Not Disco and Frankie Goes To Hollywood…

The Monitors: Hello Maximum Joy. I believe your show at this year’s Simple Things festival will be your first since the early ’80s. Was anyone at the festival responsible for getting you back together or was reforming in time for Bristol’s big one-day event a happy coincidence?

Charlie Llewellin: The festival asked Janine if we would play, and she asked all of us – I was delighted to agree. It’s a great honor.

Janine Rainforth: Luke Sutton of Simple Things and Crack Magazine dropped me an email – it was an offer to play at Simple Things (a festival that I was aware of as a friend, DJ Nature [The Wild Bunch] had played there recently), and this year Godspeed You! Black Emperor are playing the opening night so I knew it was a great festival with great curation. It was such an honour to be asked to be part of this – and it fell on the desk at just the right time in terms of readiness and other plans in the background for us. Perfect timing, we said yes!

The announcement has no doubt put a lot of new ears onto you (including mine). I wonder what position you think post-punk occupies in 2015, when Public Image have a new album out and Bullion is supporting you at the Lexington (his productions have a lot in common with the scene you were part of)…

JR: It seems that post-punk is a continuning phenomenon for sure – it seems to evolve from generation to generation – with different things to react to and bounce off maybe…

CL: I’ve been living in Texas for the last 25 years and honestly not thinking that much about the band. Jan kept me updated on things that were happening and in the last year it seemed like there was more interest [in Maximum Joy]. At first it was kind of odd to me but then I realised this was a real thing. I’m glad that the music is of interest to people.

What Maximum Joy track would you get people to listen to if they haven´t heard of you before?

JR: It’s hard to answer that in one! All of the tracks carry something of us.

Tony Wrafter: ‘Silent Street’ is by far our most popular track according to PRS and our publishers Cherry Red! I tend to agree with that!

You were included on Disco Not Disco 3, which was compiled by Bill Brewster. How did that come about?

JR: The inclusion came about via Quintin Scott of !K7. He introduced me to Bill (electronically as it were) – Bill was involved, along with Quintin, on the compilation. Bill chatted to us a bit prior to writing some pieces about the track/band – apparently he’d seen us live too, way back.

Bristol is known for the ’90s trip-hop scene and then the drum ‘n’ bass soundsystems etc., but what was it like when Maximum Joy formed?

JR: Bristol was pretty exciting at the time. There was a lot of possibility in the air – even though the political climate was tough and there was extremely high unemployment, etc. – certainly in the club, live music and shabeen scene that we hung out in. [That] was our realm – we could make music and still make a difference, or so it seemed!

TW: Reggae and Punk mostly with The Cortinas, Talisman, The Blue Aeroplanes, The Pop Group, Glaxo Babies and Misty & Roots.

There´s a huge array of influences in Maximum Joy’s work. Who were the artists you were listening to at the time?

JR: I was listening to a big variety of stuff – like all of us – we were into disco, funk, jazz, punk, rap, tribal, folk – you name it! Chic, John Martyn, Bootsy Collins, Funkadelic, Tom Browne…

I’m wondering if you know whether your name was the inspiration for the Frankie Goes To Hollywood track?

TW: Yes. Paul Morley admitted at a ZTT night that it was!

Could you put together a playlist of songs of your favorite Bristol tracks from the ’70s and ’80s and a sentence on each of them?

JR: This is not from Bristol… but to be honest we looked outside Bristol really for music, so I’m including it. It’s some throat singing that I was listening to with a friend Polly back then, I remember this because it was something that really inspired me to sing.

Smith & Mighty: these guys lived in the same street as us back in the day, Campbell Street – or at least Mighty did – their sound sums up Bristol pre-trip-hop to me. The Wild Bunch – which spawned many things, including Tricky and Massive Attack – Nellee Hooper was in it, who was in Maximum Joy prior to this. In this clip there’s Miles Johnson (DJ Nature) and 3D who later went on to form Massive Attack, and Claude Williams. Anything off of these compilations [Bristol Archive Records- The Bristol Reggae Explosion]. Bristol reggae was massive and prolific in the ’80s. I used to go to late night blues/shabeens and absorb the bass… And the list wouldn’t be complete without our friends, The Pop Group.

Interview and text by Nicholas Burman 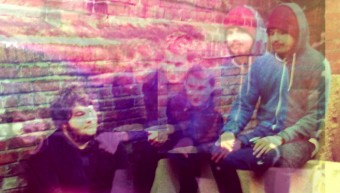 We talk to Bristol´s premier dreamweaver Oliver Wilde about album number three, the pitfalls of Wikipedia, and his upcoming performance at Simple Things...
Read More