If jazz is a four-letter word that offends you then it’s probably best you look away now. However, open-minded audiences can rejoice as virtuoso musician & celebrated founding father of Ethio-jazz Mulatu Astatke is in London this weekend to present his refreshing & innovative funk, soul & Latin-infused compositions that have breathed new life into a much and sometimes unfairly maligned genre.

Born in Ethiopia during the 1940s, Mulatu’s family sent him to the UK where he earned a degree in music at Trinity College of Music in London, before completing his education in the U.S. by becoming the first student from Africa to enroll at Boston’s prestigious Berklee College of Music.

After studying percussion and the vibraphone, it was in New York during the late ’60s that Mulatu developed a fascination with Latin rhythms and American jazz, which would influence his subsequent recordings. He then took his unique, self-coined ‘Ethio-Jazz’ sound back to Ethiopia where he refined his music. Although he continued to record in America, his influence could be felt in his fellow countrymen’s recordings and helped further develop the burgeoning jazz talent coming to the fore.

His influence was also starting to reach the ears of American jazz greats such as Duke Ellington, whom he appeared with as a special guest during Ellington’s tour of Ethiopia. It was during this fertile creative period that Mulatu really hit his stride and helped establish the ’70s as Ethiopia’s fabled golden era.

The influence and inspiration of that era can be heard in modern day culture too, as a number of his compositions are featured prominently in Broken Flowers – Jim Jarmusch’s 2005 film staring Bill Murray. His presence can also be felt in hip-hop, where vinyl aficionados & crate-digging producers such as Kanye West and Madlib have discovered and sampled his work. Probably the finest example of this can be heard in Nas & Damian Marley’s rabble-rousing ‘As We Enter’, which loops ‘Tegelle Tezeta’ to fine effect.

Due to this exposure to a wider audience, Mulatu is more in demand than ever across the globe, and his performance at the Royal Festival Hall this Saturday promises to be a treat for all those lucky to attend. Tickets are still available but be quick as they are moving fast…

After Many A Summer Dies the Swan @ Oval Space 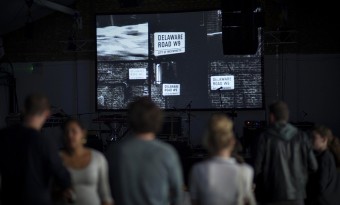 Films + music = a great Tuesday night out. Or at least that's what Nicholas Burman was hoping for when Domino Publishing met the London Short Film Festival at Oval Space...
Read More