Green Language is the second full-length by 31-year-old Glaswegian Russell Whyte, better known as Rustie, released on the British electronic institution Warp Records. A label which, after having a low hit-rate for a while in terms of genuinely interesting electronic music, was slightly rejuvenated by Rustie’s well received 2011 debut, Glass Swords.

While his debut stood up pretty much singularly at the time of its release, its proggy maximalist aesthetic in today’s electronic music climate wouldn’t be so unique. The concept of piling sugary layers upwards on top of one another is fairly commonplace, although few have made it sound so appealing. This quite possibly explains the change of direction into what the artist considers more serious territory on this new release.

Rustie himself has described his debut as “taking the piss with over the top silliness.” Green Language is definitely the sound of a producer wanting to be taken more seriously, but unsure as to who he really wants to impress. At various points it seems like he might fancy working with rap game heavy weights like long-time contemporary Hudson Mohawke, who recently collaborated with Kanye West. At others, it seems the EDM stadium show is where he wants to be.

Yet there are still moments of gurgled ambience that definitely want to be taken as the work of a serious artist, far away from the over-the-top skyscraping builds and drops that populate dance culture, especially in the U.S. For a record that is musically so straightforward, things do tend to get a little confused.

The record opens with an intro spanning two short tracks that call to mind subdued takes on the openers from the first couple of Fuck Buttons albums, as well as Oneohtrix Point Never. There are fizzy bursts through ambient synths and some in-flight propulsion to these scene-setting tracks before fading out, followed by some of Rustie’s treated guitar sounds, which are a recurring motif in Green Language.

The effectiveness of these tracks is massively increased by what comes next – the lead single and album highlight ‘Raptor’. It’s an ultra-layered, headache-inducing build and drop type affair, with a banging hardstyle beat building for what seems like forever and dropping into more of the usual 808 trap sounds. The wonky, seasick lead synth line is typical Rustie and is all the better for it. From there we’re dropped into a tropical plunge pool to cool off again in a Second Life natural beauty spot, before a return to some more in-your-face tracks.

The pair of MC tracks that follow are very hyped up as intended, but the outcome is not very good. Firstly, I want to like D Double E getting the exposure he deserves, but this is Dizzee-at-a-festival nonsense that seems to go on forever, despite not even making it to 4 minutes. The second of the pair, ‘Attak’, fares better; a track with Danny Brown rapping at breakneck speed with a siren sound can’t really fail to be a bit exciting.

By this halfway point we’ve seen pretty much all this record has to offer, good and bad. Still to come there’s more Daft Punk-style guitars on ‘Tempest’ and video game completion music on ‘Velcro’, which are both things Rustie does quite effectively here. Then there’s the vaguely Cloud-Trap ‘He Hates Me’, that falls flat on its face, going to I don’t know where.

Numbers label-mate Redinho shows up on the funky talk-box effort ‘Lost’, which comes off like a Chromeo off cut. That bad. A long way in terms of style and quality from Rustie’s 2009 Bad Science EP on Wireblock (one of the labels amalgamated to form the now formidable Numbers Records).

‘Dream on’ is shimmery, and the pillow-soft production perfectly accentuates Muhsinah’s strong and pretty vocals. If this album is a CV, then this style is definitely something that Rustie is very compelling with. The album is bookended by ambience, with an angelic choir on ‘Lets Spiral’ and cascading piano and bird chirps to tie in the loose theme involving the language of birds, or “Green language”, which is the idea of speaking purely and directly.

The record has nothing to match the Buckfast-on-the-waltzers rushing thrills of his debut, but it never really attempts to. It feels like a producer being pulled in different directions and unable to make the call on which way to go. This album is too direct yet lacks direction. Nice cover though.

Merchandise – After The End 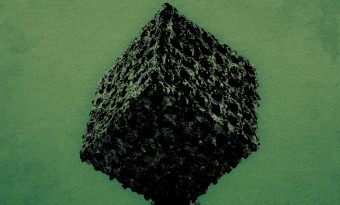 Luke O'Dwyer planned to marry the new Merchandise album, but their major label debut turns out to be a more morose spouse than the one he was expecting...
Read More