In the first of a new column incorporating the editor of the much-missed RockSucker, Jonny Abrams delves into this week’s singles releases to bring you the good, the bad and, well, The Kooks…

Kind of like one of those insipid, chart-fingering ‘loverman’ tunes where “I want you” becomes “ah wantcha” and a million motorists yell vainly at a million other motorists to “TURN THAT BLOODY SHIT OFF”.

Except the phased synths feel like cool doses of facial spray on a hot September’s day, and Prince’s meandering yet rhythmic chat doesn’t leave the stench of gym-sweat and Lynx Africa everywhere.

Good to see an old dog doing new tricks better than the young pups. Dog’s bollocks might be overstating it a little but it’s pretty lovely once you’ve recovered from the initial shock of unnecessary Autotune.

It’s one of those tricky buggers that’s not yet free to embed conveniently for your listening pleasure, but you can listen to an exclusive SoundCloud stream on the confusingly named celebuzz.com website.

Is that meant to be CeleBuzz or CelebUzz? Neither makes any sense whatsoever.

Three and a half dogs out of five!

Two flippin’ geniuses in tandem here, frankly, and coming from sufficiently different places as to make for sweet union.

And what a union it is: Lotus’s blaring, jazzy electronica is varied enough of gait – there’s a mid-’90s ‘Club Mix’ bass gurgle at one point, then a sudden outbreak of sleek hip-hop – to grant Lamar a series of different vantage points to show off his remarkable flair.

There is to be no referendum on this union.

Is this a nod in any way to Amsterdam post-punk pioneers Minny Pops? Bit of music journo showboating for you there. Anyway, in a perfect world they would have let Aphex Twin compose a new national anthem by now.

If this is anything to go by then forthcoming new album Syro will, funnily enough given the chronology, sound far more in line with his ‘90s stuff than 2001’s jarringly haunted Drukqs.

Mind you, ‘minipops 67’ does somehow fuse the dark psychedelia of the former with the just-plain-dark of the latter – and does so with an unfamiliar constantness of rhythm that suggests we’re about to receive the most dancefloor-friendly Aphex Twin LP to date.

Heck, for Aphex Twin this verges on acid house. We’d say the man’s finally mellowed, but then we remember his seminal Selected Ambient Works 85-92 album.

ADDENDUM: Upon further googling, it transpires that Minipops was a kids’ music television show broadcast in 1983, and was cancelled surrounding “controversy over children singing songs that often contained a subtext of adult content”.

Four and a half made up words out of five!

Two no no nos out of five!

Capitalising your name as if you were the only band who thought of it is certainly not the way to be loved round these parts.

An apparently needlessly convoluted intro arouses our suspicions still further, before they are swept away by a sweetly sultry little tune with no little breeziness about it.

Three and a half ways to be loved out of five!

Way more melodic than I was expecting – there are touches of Sonic Youth and Wire about it. Dungen too, for any psychedelic Swedes out there.

An altogether more stomachable proposition than their Comanechi-er prior work.

Three and a half lazy and borderline racist comparisons out of five!

Mostly listened to this one because the band are from Hull and if I hated it then I had a nice “they misspelled Hell” gag lined up. Trust me, it would have been a classic.

Imagine my disappointment then when ‘Up All Hours’ turned out to be actually quite decent, like Half Man Half Biscuit without the genius but with enough of the scuzzy riotousness to get by.

Three and a half hastily judged book covers out of five!

The kind of nice, sleek production stifled by a drab ‘white soul’ vocal that’s so prominent in this collaboration-friendly age of technology.

Well, someone had to say it.

Two and a half number 1’s in Australia out of five!

We shan’t, especially after this perfunctory slab of Stones-mimicking indie-disco. It’s probably one of the best things The Kooks have done, mind.

Two light measures of prescribed funk out of five!

Foster the People – ‘Are You What You Want to Be?’

Apparently, Foster the People can’t decide what they want to be – in the verse they seem to see themselves as quite the Animal Collective, before going all Phoenix for the zappy rush-pop chorus.

About that chorus, if we were to say to you that it sounds tailor-made to soundtrack televised football coverage, who would you imagine it to sound like?

Two passable yet entirely unnecessary impressions of superior and frankly incompatible bands in one song.

Two demographics out of five!

A song about pretty girls, sung by a pretty girl? Should that be allowed? I guess if gangsta rappers are allowed to rap about their own wealth…

We’re going to break from what appears to be the societal norm and call out Little Dragon for being a textbook example of emperor’s new clothes – it’s alright and all, but when you crack it open and feel about the inside of it there’s very little there.

They’re still a damn sight preferable to The xx in the ‘nu-chillout’ stakes. Did we just coin a genre? I think we just might’ve.

Okay, see, in my mind Beyoncé’s crazy sister has gotten hitched to a former Chelsea goalkeeper, with dare we say ‘hilários’ consequences.

Apparently though this reality isn’t perfect enough for that to have been the case. And the song’s a bit ‘meh’ so it’s difficult to justify its inclusion in this week’s singles round-up.

I just wanted to share the warm feeling that accompanies the thought of Beyoncé’s crazy sister getting hitched to a former Chelsea goalkeeper, with, yes you’re damn right we’ll say it, ‘hilários’ consequences.

Two disappointing truths out of five! 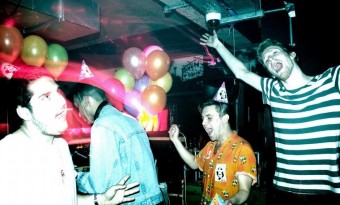 Always wanted your own club night but never had the gumption/friends/ability to write a guestlist? Let Marcus Harris of White Heat show you how it's done...
Read More