Everyone knows that running a club night is the coolest thing a twenty-something can do with their time. Not only will you be in charge of the drinks so you get all of the tokens, you’ll also be the envy of your friends with a phone book full of the coolest people in the music industry, girls literally tearing your clothes off at 3am as the lights come on, constantly lavished with more drinks as you, and only you, have the final say on the guestlist, and basically never having to queue for anything again because you’re a DJ. If this sounds like the kind of treatment you could get used to, then read on.

Like a load of bands that none of your parents friends know the name of? Well you’re half way there my friend. What about obscure releases from recently bankrupt record labels? Oh great! Is all of your music ripped off Soundcloud and you have no idea what I mean by ‘low bitrate’? Welcome to the club, you are now a DJ/club promoter.

Step 2: Be the popular one amongst your friends.

Let me be the first to tell you that it’s a common misconception that being a club promoter makes you popular. You’re a club promoter because you are popular. If you can understand that, then you know what I mean.

You’ve got that playlist that went down super well at your friend’s house party in Deptford, you’ve got a cracked version of Traktor and two blank CDs, your mates have all promised they’ll be there but now you need to decide on where to tell them all to go. Obviously you’re going to want to pick the trendiest spot in town, or else how will they have any idea where to go. London is a huge city but luckily they designed it so all the clubs and bars are in one place. It’s called ‘east’ London, even though it’s kind of north.

Make sure you export the attending list from the Facebook event you made that 400 people have clicked attending to, then hand it to the door girl and she’ll do the rest while you make your way through those drinks tokens we talked about earlier. Don’t worry about all the people you forgot to give plus one’s to because you don’t have signal down here.

Repeat steps 1-4 every month until your friends have proper jobs/you get someone pregnant/the trust fund dries up. And don’t forget to remain completely reliant on the dedicated promoter website, Facebook, for everything.

We Need To Talk About Frank 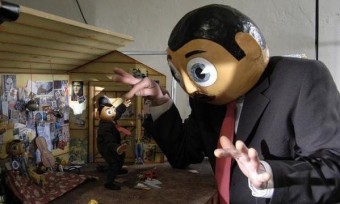 With two films based on Chris Sievey’s big-headed alter ego Frank Sidebottom on the way, we pay tribute to the late comedy legend and his bizarre world...
Read More