Those pesky kids Bo Ningen mustn’t half love a good collaboration; anyone who was at attendance at this year’s fucking immense psych-rock festival ‘Raw Power’ will attest to that. There was a bloody good dose of the Bo Ningen spirit flying about I can tell you.

Which is a good thing. Unless you hate them, in which case you’re a twat.

Singer/bassist Taigen Kawabe played in at least four different iterations during that weekend (well one was at the Krautrock karaoke, but he was playing an instrument so I’m counting it O.K?), and it’s clear that they like to infect others with their wonderful brand of acid rock poison.

This time it’s the turn of fellow Londoners Savages, having previously worked with their singer Jehnny Beth on 2013 single ‘Nichijyou’, and on ‘CC’ which featured on Bo Ningen’s cracking 2014 album III. Here the two bands merge their brands of post-punk and psychedelic noise to create Words To The Blind, a single 37-minute tasty jam sandwich of a song. The genesis of which requires a wee bit of a back-story, so strap yourself in for a moment as we’re about to get deep.

Words To The Blind started life as a live experiment, an exploration of the theory of ‘simultaneous poetry’, a concept first brought about by the Dadaist art movement way back in 1916. Two poets would read out their work simultaneously (hence the name innit) while facing each other, often reading in totally different languages. The resulting aural (oral) clashes thus create a totally new and unique sound as the two poets’ voices interlock and jostle for attention inside the earholes of the ragged, beard-stroking onlookers. Creation through conflict.

Here Savages and Bo Ningen set out to recreate this sound alchemy, a proposition that could threaten to be very noisy indeed.

However, the end result of this collaboration is nowhere near as dissident or anarchic as its arty premise would lead you to believe. Evolving through roughly five ‘chapters’ or ‘movements’, it’s an entertaining Scooby Doo ghost house of a ride. A house of giggling shadows and floppy-handed rubber skeletons. The only thing to be scared of is the bastards in the costumes trying to fuck you over. That is to say it’s bloody good fun and never as terrifying or alienating as it sounds.

Starting with a passage of eerily whispered Japanese and French spoken word poetry by Taigen Kawabe and Jehnny Beth respectively, it’s this part of the track that most resembles the ‘simultaneous poem’ ideology. Being the single language dolt that I obviously am, I have no idea what is being said within the lyrics but their two voices do mesh together to create an interesting sound, like levers and pulleys, pushing and pulling you into the track.

This then melds into one big fat prog-rock jam session. Basses lurch at you from the darkness like masked spooks attempting to scare the shit out of any unknowing Shaggys in view. Guitars flap in and out like bats on elastic bands. It’s a wind tunnel assault of sly funk. The two bands are clearly feeding off one another and the result is more like the spacey acid-psych output of Bo Ningen than the spikey post-punk of Savages, though should appeal to fans of both.

After 20 minutes it comes to a complete standstill leaving the participants of the ride dangling in the darkness. Has it all ended? What’s next? A flaming skull? A be-sheeted ghost?

There’s a cranking noise. The guitars create an industrial grind. Gears start to shift and we’re underway again, plunged deep into the most melodic part of the song. Jehnny Beth’s vocals take center stage and a more formal approach is taken. The song crescendos into a trippy blissed out ending as the ghost house exit doors open and allow you to leave safely, a little wet but exhilarated nonetheless.

It’s been well worth paying the price of admission. Even if those sodding ghouls have tried to nick your wallet as you went through the dark painted corners of the ride.

Those bloody ghouls. They’d have gotten away with it too if it wasn’t for those pesky kids Savages & Bo Ningen!

TV On The Radio - Seeds 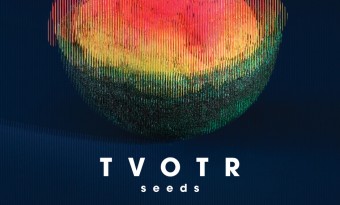 TV On The Radio sow the Seeds of happiness on their fifth studio album, but sadly they fail to germinate over twelve largely forgettable tracks...
Read More