Last Saturday I attended day one of FYF Fest, the self-proclaimed “best weekend of summer” that is held each year in Los Angeles. I had already seen a number of the bands on the lineup at Pitchfork Fest and other shows. The only band I was really interested in seeing was Caribou, and their performance alone made this the best weekend of summer for me. Although, for a few minutes there, it did not seem like their set was actually going to happen…

FYF is usually held at the Los Angeles State Historic Park, but the park is now undergoing a renovation so it was moved to the Los Angeles Sports Arena and Exposition Park this year. The change in location resulted in a whole new festival experience for those of us who have been attending FYF for the past 5 years. There were three outdoor stages and then a fourth stage inside the Sports Arena which had a dancefloor and a plethora of disco balls. This is where Caribou was scheduled to perform.

I was taken aback by this set-up at first because I personally go to festivals to experience music in an outdoor setting. I went outside to the main stage and watched Albert Hammond Jr. perform and then headed back to the arena to catch Todd Terje before Caribou. Much to everyone’s dismay though, the doors were locked and no one was being allowed in. Apparently, the fire marshal had ordered everyone to evacuate. We kept lining up outside of different entrances only to be told to go around to the other side. I was preparing for this to turn into an angry mob, but after about 30 minutes of back and forth confusion, the doors finally opened and we burst through in a loud rush of excitement.

After watching Todd Terje’s set, I moved to the front of the stage for Caribou. Dan Snaith and his band members appeared onstage all dressed in white and started to play ‘Leave House’. Unfortunately, the music was barely audible from where I was standing and the pounding of the bass was so overwhelming I felt like I was going to pass out. Some people in the crowd started to leave their posts and I eventually followed and moved to the middle of the room.

The music sounded much better once you got further out and there were a lot more people dancing there than up front. When they finally got to ‘Odessa’ it was clear that this was the song we had all been waiting for. During my University days I’d play this song at every house party I went to, so my life feels complete now that I’ve danced to it as it was being performed live.

Caribou ended the set with new single ‘Can’t Do Without’ followed by ‘Sun’ which started with an explosion of “Sun, sun, sun, sun…” This was the part where I wished I was watching them at an outdoor stage; ‘Sun’ does not have the same effect when you’re inside a dark room. It was still fun to dance to though, as were the rest of their songs, so definitely go see Caribou if you’re in the mood to groove… 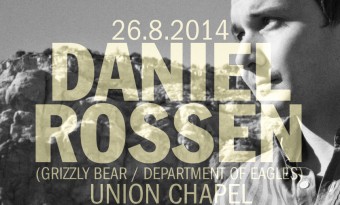 While everyone else was across town gawping at Kate Bush's 60-foot animatronic Hound of Love (or whatever it is she's got on stage at the Hammersmith Apollo), we went to worship Daniel Rossen's significantly more stripped-back show at Union Chapel...
Read More