And you know what, it is. This is an album. It is a collection of musical tracks played in a particular order (however old fashioned that might seem). It starts with an intro (subtitled ‘It’s Album Time’) which contains the phrase ‘it’s album time’ at least as much as this introductory paragraph does, possibly more. I don’t think I’m going to be capable of imitating the rest of the album in my stylistic structure but let’s be honest, nobody wants that anyway.

Todd Terje is here. This is officially his debut album, which is ridiculous, because he’s been slamming down immaculate disco pretty ubiquitously for a while now. He’s part of the studiously produced wave of Scandisco that’s been keeping me cosy and warm for at least four years now. I remember how I first fell in love. Work was shut because of snow. I needed something to fixate on, and I found it in Boomkat’s ’14 tracks: Scandinavian Disco Heat’ collection. It kept me warm, and I’ve had Scandinavian Disco in my heart ever since.

It started me digging around in the weirder ends of ‘actual’ disco, too. It was a gateway drug. Todd Terje’s immense ‘Eurodans’ was at its heart, and that track remains one of the perfect expressions of the aesthetic. It’s uplifting, retro, and perfect.

Perfect. Immaculate. Pristine. I can’t stop myself calling attention to the craft of it. It’s electronic music with every single edge ground off. It looks back at one of the most ridiculed genres in musical history, peels away the orchestral bombast inserted by the mainstream, and then buffs it up until it’s ready for the clubland of the present. It does not have space for accidents or imperfections. It does not shy away from the inhumanity of the machines, it uses them to build something where everything is objectively correct. And somehow, somehow, it still has soul.

So, it’s album time. Todd Terje has been slowly infecting your ears for years, but is only now releasing a proper album. His ‘Remaster of the Universe’ was an incredible collection of remixes, previously presented under pseudonyms referencing martial arts legends (Chuck Norris – ‘All That She Wants’) and turning Norwegian politicians into jazz groups (Kacic Kullman’s Five – ‘Terjelator’). The highlight for me was the ridiculous barbershop jazz version of his own ‘Eurodans’, but there was a remix for everyone.

Elsewhere, the Ragysh EP was utterly dreamlike. It’s the ARPs explored one particularly lush analogue synthesiser, and gave us ‘Inspector Norse’, which I feel like I’ve heard everywhere, all the time, forever.

This guy’s got form, is what I’m saying. So when he says it’s album time, it seems a pretty bold statement.

And now it is. The album is exactly what you expect from the cocktail drinking cartoon Terje drawn on the cover, in a Bryan Ferry suit and unbuttoned shirt combo, pondering on a piano (Bryan Ferry features on the record, but we’ll get to that in a minute). One foot, possibly two, rigidly in the past. The record swims through the aesthetics of an imagined tropical disco, somewhere between a cocktail lounge and a beachside bar. The album feels affluent, arrogant and smug with cocaine. Everything is immaculate. Everything could be the soundtrack to a dream of a better life. It is caught up in a fantasy world; like an old-fashioned advert for an airline, it sells you an ideal of impossible possibilities.

The production is constantly perfect, the breadth is wider than expected. The wonderfully named ‘Alfonso Muskedunder’ sounds like the theme tune to the ultimate cop show, half way between the chase scenes from Butch Cassidy and the Sundance Kid and Strike it Lucky.

‘Svensk Sås’ brings high octane kazoo, scat harmonies and finger clicks to the fore, laying down a bed of percussive energy that refuses to stop adding elements. By the time an accidental breakbeat sidles through, you’re either dancing or you need to seek professional help, as something is very, very wrong. Once it’s performed this test, it immediately drops out of the game, and makes room for ‘Strandbar”s wall of synths and house piano.

‘Swing Star’ spins a shimmering web of synthesisers around you, and builds to a perfect shuffle and a horizonless climax, before ebbing away into a slowing dream of what it once was. It is impossible to describe anything on this record in any way other than with profuse, unintelligible wankiness. I’m sorry. The music is rooted in references to other genres and styles in such a way that it seems like you’re taking the piss to even mention them (ooh, is that a little John Carpenter there? Yeah, probably). You can only describe it as an absurd parody of itself.

But then there’s the interminable blandness of ‘Johnny and Mary’, with Bryan Ferry (obvs) on vocals. It’s a hideously duff note in proceedings. I guess he felt it needed a slow dance. I guess the opportunity to make Bryan Ferry do something was irresistible. I guess the production is still actually perfect. I guess it’s ironic.

Anyway. It’s shit. I reckon you skip it. Or play it at the end of the night if you want everyone to start hating themselves. And it’s not actually interminable. It’s probably only a couple of horrible minutes in a record that otherwise pulsates with glee.

I want to say it’s perfect, but there is something missing. In all the glee, all the knowing nods and winks and nudges, all the retro tomfoolery, it never feels quite as bold as the title. I have no doubt that you will hear most of the tracks in every half-respectable club you frequent any time soon (my idea of respectable might be different from yours though). But all of it feels much like ‘Inspector Norse’ (which closes out the album): backgroundly blissful. Lovely and perfect, but also a little bland. The aesthetic is something to get lost in. The delivery is always absolutely spot on. But there’s something missing in between. Only a few of the tracks feel like more than just an expression of a specfic aesthetic, rather than an actual piece of music. It’s like a delicate palace built out of chocolate. It’s fine craftsmanship. It’s tasty as anything. It’s ultimately disappointing when you see that it’s hollow.

I can see that side of things. But even if it’s just an aesthetic ideal etched in vinyl, rather than a solid, whole and meaningful substance, it’s still totally ‘album’. I still love it. This is one whole side of what music is – craft, not art. Every motif is in a perfect position. Every structure is calculated perfectly. Every fade, tempo shift and transition is exactly where it should be. That old statement about sculptor’s carving away a negative and just leaving behind something that was in the stone already? It’s true here. This music was always in the air, Terje has just found away to make us hear it. 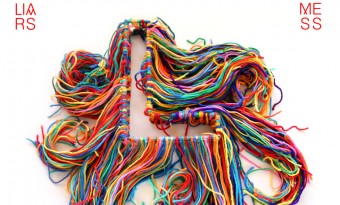 Liars have a reputation for changing direction with every album, generally challenging themselves as much as their listeners. Is their new album another bold move into new territory? Or is it literally just a 'Mess'.
Read More