Ty Segall is a bit like a comfort blanket – reliable, recognisable and warm – and after last year’s wholly acoustic offering he’s back with a largely electric record once again. Merging his time as troubadour with his involvement in the heaviness of Fuzz’s pretty special eponymous LP, Manipulator seems to exist as a halfway house where he’s starting to mix and match his different influences into one identifiable project, whereas the past few years have seen him go off with pseudonyms and side-projects to indulge in his separate fantasies.

Being a halfway house, it works and it doesn’t. He’s obviously got a bit tired doing around three albums a year and has stuck a lot of material on one record instead – Manipulator spans a hefty seventeen tracks. If he was still banging out Twins-style 90-second bangers such as ‘You’re The Doctor’ that would fly by in no time, but his continued perseverance with ’60s counter culture musings (drum solos, guitar solos on every other track) slows the pace down a little and in turn slows down your ability to digest it quite as easily. It feels a bit like a solid album with a decent EP inserted in the middle, too.

When it works it really works, showcasing his raw song-writing talent as well as the likes of ‘Girlfriend’ have in the past. ‘The Faker’ is some sort of Kinks tune seen through the eyes of a glam rocker, while ‘The Crawler’ is pure pysch adrenaline way beyond what most bands attempting the same thing right now could think of achieving; Ty’s voice flies between falsetto and grunge almost as quick as the snare beats click. The riff on ‘Mister Main’ sounds like a mid ’90s chill-out sample, and there are also heavy traces of Jack White running throughout; The country-tinged ‘Stick Around’ could be lifted straight from White Blood Cells, which is awesome (if you’re a White Blood Cells fan).

One reason Segall has always seemed quite warm is the romanticism of his lyrics, the youthful abandon tied in with the permanently drunk rawk of the aesthetic. This time around though there’s a strange sort of emptiness in the air, from the pithy impersonation of requests from ‘Susie’ to “be on TV” on ‘Susie Thumb’ to ‘Who’s Producing You”s jealousy concerning someone being unfaithful (a girlfriend or a former band member? Maybe both).

Whatever the downsides of Segall’s latest offering, witnessing an artist develop and, most importantly, getting more interesting and original as a result, is more than welcome. He’s becoming less of the comfort blanket I’d presumed him to be, and more the songwriter he wants to be. Stick around for as long as you like, Ty.

Ravioli Me Away - The Inevitable Album 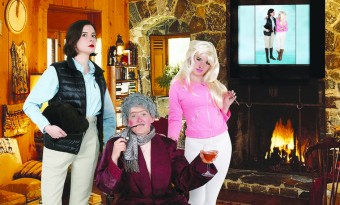 Post-punk three-piece Ravioli Me Away prove they're better than school dinners on their ironically unpredictable debut, 'The Inevitable Album' ...
Read More