Following a turbulent weekend of Jabberwocky-related kerfuffle, there was some uncertainty as to whether or not San Francisco reverb magicians Thee Oh Sees would play their slot at Ace Hotel on Sunday night. As an Oh Sees/Coachwhips super-geek, I can’t really put my excitement into words when a kindly soul at The Monitors slapped me with a ticket for the show.

I realise that it is nearly impossible for me to write about this gig objectively, as I spent the majority of Thee Oh Sees’ set nursing a semi and drunkenly falling into people. My love for this band is worrying to say the least, so much so that I was fighting to keep myself from screaming like a Japanese schoolgirl when Dwyer and co. came on stage. So rather than harping on about Thee Oh Sees and how marvellous they were, I’m first going to run through a couple of negatives…

This is a new line-up, a touring trio consisting of John Dwyer, bassist Tim Hellman and drummer Nick Murray. The new trio is tight and raucous, a clattering, electrified Coachwhips-style set-up best suited to cramped sweatboxes like Ace Hotel. However, this isn’t the iconic Oh Sees line-up that you know and love; I missed Petey Dammit and Brigid, and I’m sure others did too. At times, Dwyer’s vocals were almost inaudible, lacking the foundation and sweet clarity that Brigid’s wonky Mamas & Papas-style harmonies usually provide. Aside from this line-up change and some relatively inconsequential sound problems, the only other negative points I can think of are that there wasn’t any beer on draught and I woke up with extensive bruising on Monday.

While Thee Oh Sees’ return to clattering slapback garage aesthetics may have alienated those fans who fell in love with the more polished psych krautrock sound of the last two albums, Dwyer and chums more than compensated with plenty of renditions of more recent tunes including ‘I Come From The Mountain’ and ‘Encrypted Bounce’. Frequently, songs descended into lengthy improvisations and doodles, Dwyer shuffling over to his little synth in the corner of the stage and plonking out melodies. Like the last incarnation of the band, these Oh Sees are adept at mashing up standards and transforming them into unrecognisable live jams.

The band tore through fan favourites like ‘Tidal Wave’, ‘Toe Cutter’, ‘Thumb Buster’, ‘Lupine Dominus’ and the choppy ‘Dead Energy’, turning Shoreditch High St’s notoriously unappreciative hipster audience into a sweaty and ecstatic mess of pushers and shovers. The happiness and abandon of the Ace Hotel crowd is the best measure of how appreciative London is to get a slice of Thee Oh Sees, even in its mutated current form.

While the new touring line-up’s bloody-nosed aesthetics may disorientate some, this new, primal incarnation of Thee Oh Sees is well worth getting sweaty with if you get the chance.

Words: Ted Ralph
Photo: Brian Lee Hughes (not actually taken at this show, but whatever)

We hit the north for Beacons Festival 2014 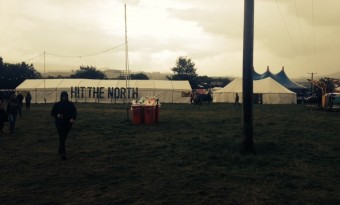 Sold as one of the best small music festivals in Britain, Beacons brought togetherdiverse acts like Neneh Cherry, The Fall and Jon Hopkins last weekend, and in the process cemented its claim...
Read More