For some reason, I’ve never seen any pictures or videos of Clap Your Hands Say Yeah. That being said, I had no idea what kind of vibe the band would have in person before I went to their show at The Troubadour. I had always pictured them to be along the lines of Modest Mouse or The Decemberists, but when they stepped onstage and started playing ‘Blameless’ and then went straight into ‘In This Home On Ice’, they came off as laid-back and mellow. It was like watching Real Estate. There was also complete silence and subtle movement in the crowd. I felt like I was at a big outdoor amphitheater or a small, intimate house show. It was different.

Their third song, ‘Satan Said Dance’, seemed to have a powerful effect on everyone though. It reminded me of that scene in the movie The Aristocats where they’re singing ‘Everybody Wants To Be A Cat’. The lights were changing colour rapidly, the band took control of the stage with their movements, the crowd was dancing and did a call and response with singer, Alec Ounsworth. It felt like the whole venue was going to fall apart. Ounsworth called the crowd a “lively bunch” and then the band got into a groove for the song ‘Gimme Gimme Some Salt’.

They were pretty fun to watch during the more upbeat songs. Ounsworth and the keyboardist would crouch down low on the ground while they played; Ounsworth also made a lot of hand gestures while he sang, as if he was telling us a really compelling story. The bassist had a power stance and he liked to clap and jump around like a pop-punk musician. The drummer was probably the most entertaining for me. He reminded me of Chris Kattan in the SNL skit for the song ‘I Wish It Was Christmas Today’ because he was wearing red and kept shaking his head back and forth.

Ounsworth got up close and personal with the crowd during ‘Some Loud Thunder’ as the keyboardist took over guitar duties, and he squatted down at the front of the stage to serenade the audience. Towards the end of the song, he got up and shuffled around the stage while playing harmonica. I was pretty impressed by the fact that no one in the crowd even touched him while he was singing right in their faces. They all just stared up at him in awe. 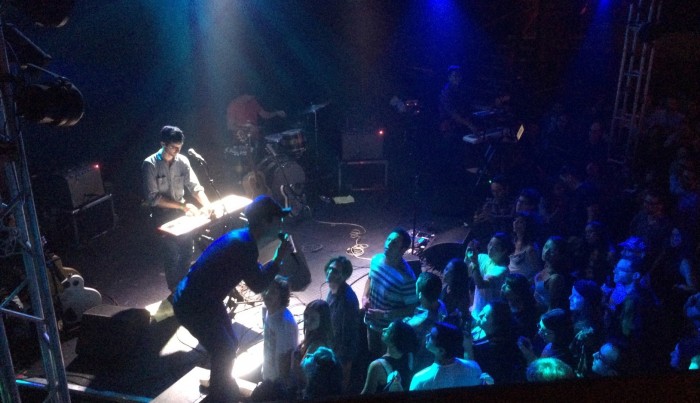 I wonder if this was an unusual kind of audience for the band to play to because Ounsworth commented on how everyone was so quiet in between songs. This made me realize that they had hardly cheered or clapped after each song, which is ironic considering “clap your hands” is in the band’s name. Some people started to cheer but he assured them that their silence was okay and said they were going to play their last song and then they would go upstairs and come back down. This generated some laughs at least.

The set ended with ‘Upon This Tidal Wave of Young Blood’ and, as the disco ball came on, it started to feel more like a dance party. For the encore, Ounsworth did a solo acoustic performance of ‘Into Your Alien Arms’. In this stripped down setting his voice carried well and sounded especially nice, but after a few verses the mix got really loud and the snare drum started vibrating so it was hard for me to enjoy the whole song.

Luckily, the band came back out for the next two songs. They had already played ‘The Skin Of My Yellow Country Teeth’ early on in the set so I was wondering what they would end with. They chose ‘Heavy Metal’ which seemed to satisfy everyone, and I think we all left with smiles on our faces after seeing a band whose future we were unsure of after the departure of former band members.

While this show didn’t go the way I was expecting it to, it was actually quite a nice change for me to go a gig where everyone quietly and attentively watched the band do their thing.

Oh and fun fact, their sound engineer previously worked with The Walkmen so they were using Matt Barrick’s drum kit. Barrick is one of my favorite drummers and I never got to see the Walkmen live but at least now I’ve seen one of the kits he’s used right? 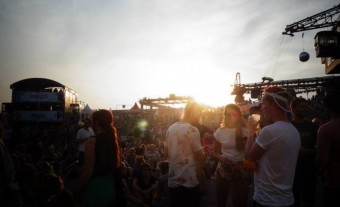 ‘They don’t call it Melt Festival for nothing!’… was the worn out witticism which grated against my very soul by the end of July’s sun-drenched post-industrial hoedown in Ferropolis, a disused quarry in the backwaters of former East Germany....
Read More