I’ve woken up with this song in my head every morning this week. This could suggest that I’m psychologically stuck somewhere about 14 years ago, perennially waking up thinking I’ve drastically overslept on a school day. Equally, it could suggest that BC Camplight’s latest single is simply one of the catchiest songs released in 2015 so far. It’s probably a bit of both.

Still, you shouldn’t let my arrested development put you off listening to ‘You Should’ve Gone To School’, a combination of Real Estate’s sunny indie and Air’s galaxian space-pop, especially not now it has a brilliant video to go with it. A video, admittedly, that seemingly required little invention on the behalf of its creator, as it’s basically just an old Felix the Cat cartoon with some of BC Camplight’s lyrics stitched into it.

Which isn’t a criticism. I love Felix the Cat. And I love this song. Being able to listen to this song while watching a synced Felix the Cat cartoon is pretty much the perfect way to spend five minutes. In fact, I’d advocate the replacement of all music videos with cartoons from the ’20s and ’30s. Think of the potential team-ups: Frightened Rabbit and Bugs Bunny, Popcaan and Popeye, Bonnie ‘Prince’ Billy and Steamboat Willie. It would be beautiful.

Well, as long as they’re executed as nicely as this. The chorus gets matched to Felix getting drunk and carousing (with crotch pixellated) around town, while the spacey bit around the 3 minute mark sees a cartoon house blissfully flying around the moon. I’m not sure about the overlayed colours at the end, but Felix falling flat on his face during the fade-out is priceless. We’ve all been there.

The song is taken from the Mancunian’s new album How To Die In The North, which is out now on Bella Union. Give it a listen. Preferably while watching old Betty Boop cartoons with the sound down. 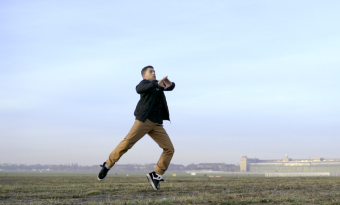