How do you review 15 minutes of music?

Matthew Herbert’s 20 Pianos was part of the New Music Biennial in the Southbank Centre. One of a huge array of new commissions, it was a collaboration with Herbert, pianist Sam Beste (and, if I’d gone to a different performance, Sarah Nicholls) and the BBC Radiophonic Workshop.

Herbert and friends have sampled a huge range of different pianos for this project. From church basements to prisons, from museums to piano factories. From the Queen Mum’s piano to Herbert’s granddad’s. It even includes the most expensive piano in the world, the one John Lennon wrote ‘Imagine’ on (a full list is available online, in the incredibly unusable ‘isuuu’ format). The amusing thing about the last, of course, being that it’s entirely unplayable, kept under glass in a museum. When Herbert’s neighbour was able to record it, he found that each key generated a different unpleasant groaning thump instead of anything resembling a piano tone.

Anyway, lots of pianos, one table, and a very short piece of music. It was actually played twice, with a short and pretty insipid interview in between (Herbert gave some good anecdote, but the questions were hardly incisive). The first time we hear the music, it’s introduced by Herbert’s voice speaking to the pianist, explaining that the pianotable won’t behave quite how he’s used to, and briefly introducing us to the idea that we aren’t really just listening to 20 pianos, but 20 rooms, and 20 histories.

The piece itself then starts, with a cycle of 20 middle Cs, along with accompanying images of the pianos in question. The variety of tone is astounding; each note is entirely different to the last, some detuned, some reverberant, some cold and hard, some barely recognisable. You can buy into the idea that each piano does have a different story, even though it’s hard to work out which is telling which story.

Once the cycle is complete, the pianos come in pairs, and Sam Beste has a chance to build rhythms and motifs from the different contrasting effects. It works well, emphasising the piano as a percussive instrument, capable of being its own rhythm section. Some of the more battered pianos give a sense of atonality that allows tiny fragments of the dance music structures (former) house producer Herbert made his name with. But each motif only lasts briefly.

It’s powerful though. One particular haunting refrain leaves me on the edge of my seat, heart opening up to the sounds in front of me. It’s one of the moments where I remember to stop thinking about the narrative and ideas of the piece, and just start feeling the music.

Each idea rapidly passes to something else though, the background giving hints to which piano is being played. Then with clattering glee, Beste storms his way up and down the piano as it becomes all twenty pianos at once. A chorus of different tunings and timbres creates a gorgeous tower of noise, actually most reminding me of the ‘black midi’ scene, where people make music with computers that, if ever notated, would just be a black smudge across the stave. There’s a chaotic joy in it, and it contrasts nicely with the melancholy moments that bookend the piece.

A brief melody later, and a sustained note is held to reveal the alarm bell after it, an artefact of the recording in Wormwood Scrubs. Nothing huge is done with it though, disappointingly; it’s just a moment of reflection, before the next phase blasts on.

And it’s over before long. A second blast of all-the-pianos raucousness, inscrutably looped and delayed so that Beste can stand up and leave the piano to play itself as a coda.

A second run through confirms that it’s a lovely piece of music, but when the interview reveals that other performances include a duet of Steve Reich’s Piano Phases, using the pianos, I feel somewhat cheated (bearing in mind this was a free event, I feel a bit ridiculous for saying that, but still). The second run also confirms Herbert’s statement that the piece is basically just 20 motifs stitched together by improvisation. The same beats are hit, but are woven together slightly differently.

It’s Matthew Herbert. It’s an idea you’ll know whether you’ll find it interesting or not, and it’s well executed. It stands up as a nice piece of music, but I won’t be rushing out to buy all copies of any releases (it will be available to stream through Radio 3 at some point, apparently). If you want a bit of time to think about the place music has in our lives, and wonder at just how different it is possible for an instrument to sound depending on its location and the life it has lived, then you’ll find something here. If not, then you shouldn’t be offended by the noises, they’re actually quite beautiful.

Matthew Herbert’s 20 pianos. It does precisely what it sets out to do. No more. No less.

Which actually, given some of Herbert’s past experiments, is faintly disappointing.

But there you go.

Compliments to the Sheff: Tramlines review 2014 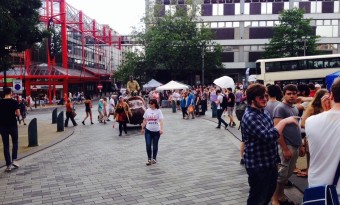 Sheffield's Tramlines has been our favourite inner-city music festival for a while now, and this year's event did nothing to alter that status...
Read More