Modern computers and the human body. Two of the most complex instruments in the world, almost uncannily so to those of us who aren’t biologists or computer scientists. They’re an intrinsic part of our everyday lives, and yet their/our inner workings are so mind-boggling that most of us find them easier not to think about, and just treat them as a sort of practical magic that’s not worth thinking about too much. Let’s face it, if you were suddenly aware of every single thing going on in your body right now, or in the circuitry of your laptop for that matter, you’d probably be pushed beyond the borders of sanity within seconds.

It’s no surprise that many creative minds have considered the possibilities of combining the two together, most commonly cyborg characters in sci-fi narratives. Christophe Thockler‘s video for electronic veteran Lusine’s latest single considers the human-meets-machine axis from an entirely different angle. Rather than combining in an attempt to harvest the best parts of each, Thockler mashes them together to create scene after scene of mutual destruction, with a grimly fascinating eye for detail.

A series of shots focus on various motherboards, disc drives and other assorted electronic viscera as they are slowly filled with blood (some of it actual blood apparently, of the ox variety. Which I suppose makes this video non-vegetarian. Oops). Sometimes stop-frame animation is used to add an extra feeling of freakishness, before a heat gun is applied to the various elements in a way that seems to both destroy them and bring them to life. It’s really quite something.

The blood element comes from a suggestion by Jeff ‘Lusine’ McIlwain himself, who was looking for a play on the single’s title: ‘Arterial’. As Thockler told Stereogum: “I listened to this really amazing track many times during pre-production and slowly thought that it needed perhaps something more than just blood. The track is very electronic, cold, but at the same time there are many layers of warm sounds, ambient sounds that makes you feel things, there is something a bit human in them. So I tried to create something I call “electrorganic”…”

That term describes Lusine’s music pretty nicely too, being both completely inorganic and yet inherently natural at the same time. Wholly a product of McIlwain’s own creativity, you can hear his heart pumping behind ‘Arterial”s beat while its synths swell with the emotions he’s synthesized inside it. We may still be some way from the point of complete cyborg integration, and many speculative fictions on that subject imagine a dystopian result. Perhaps electronic music of this quality points towards brighter possibilities, whether accompanied by Thockler’s gruesome cyborg guts or not… 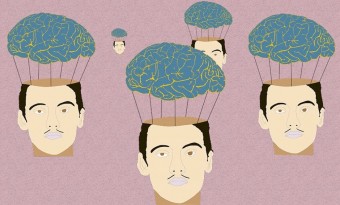