We’ve featured a few videos on The Monitors that have put me off my lunch (the climax to DyE’s ‘She’s Bad’ being the most recent), but the beginning of this animation for French multi-instrumentalist Pablo ‘Moodoïd‘ Padovani’s ‘La Lune’, directed by Marion Dupas, does so in a different way. It features, you see, a shoal of swimming sushi. Not that I have anything against sushi (or swimming); on the contrary, I love it. But one of the main things I love about it is the fact that its appearance is so far removed from actual living fish that I don’t feel guilty about eating it. Thus, seeing sushi rolls swimming amidst real (well, animated) fish meant that my planned trip to Itsu for lunch had to be postponed for another, Moodoïd-less day*.

Luckily ‘La Lune’ is unlikely to spoil any of your appetites, unless you have an allergy to cute Yellow Submarine-style animation. The sushi swimathon is followed by some deliciously psychedelic factory scenes, including Padovani and his nude bandmates being processed on a conveyor belt and turned into an array of Moodoïd merchandise. Ever since the Beatles and Monkees were immortalised in animated form, I’ve always thought that being turned into a cartoon must be the moment where you know you’ve really made it. Admittedly technology now means it’s much easier to make this happen, but I bet Padovani still felt well chuffed when he watched this back for the first time.

Things get fittingly weird when the song reaches it’s big blast-off halfway through, although much as the song remains tuneful rather than totally wigging out, the video stays endearingly weird rather than embarking on a full-scale stroboscopic freakout. Don’t worry though, there’s still time for trippy pizza mazes and hot air brain balloons, obviously.

The song itself is pretty as sin too. Padovani is also known as the guitarist for Melody’s Echo Chamber, and the first Moodoïd EP was mixed by fellow Melodian Kevin Parker, of Tame Impala fame. ‘La Lune’, though similarly palatable, feels a little less studied than their efforts though; a little more off the cuff. It adds charm here, but will it work over a whole album? We’ll have to wait until Moodoïd’s debut LP, Le Monde Möö, is released on September 1st to find out…

*This is a lie. I never go to Itsu except after 7.30pm, when they sell off all their unsold sushi for half price – when the slim possibility of being poisoned by spoiled fish adds a frisson of excitement to a thrifty treat. 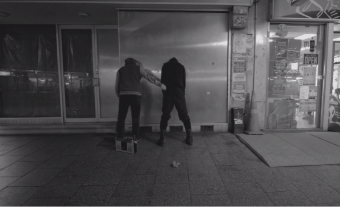 The video for Magical Mistakes' excellent 'Hollow Bodies' stars a nutter from New Zealand (quite literally), as he rhythmically battles a solid wall...
Read More