It may say something about the homogeneity of the world’s cities that we spent ages trying to work out where the video for Magical Mistakes’ ‘Hollow Bodies’ is shot. Brighton? Melbourne? Hamburg? Nope, it turned out to be Karangahape Road in Auckland, New Zealand, commonly known as ‘K Road’, where director Markus Hofko is based. Hofko previously directed the dustily surreal video for ‘Phantasm’ by Flying Lotus, and while this video may have been made with a lower budget, the music itself might, whisper it, actually be better.

The track’s taken from the Decompose / Reassemble EP by Osaka-based producer Magical Mistakes, which has just come out on one of our favourite digital labels, Canada’s King Deluxe. It may well be their best release to date, and ‘Hollow Bodies’ is one of the best tracks on it. Fusing smooth bass and a minimal 2-step beat, the track is augmented by the sound of knives being sharpened, and it’s this latent aggression, simultaneously introspective and violent, that Hofko feeds off for his video.

Or rather his star does. A scruffy bloke in boots stands with his head against a wall, underneath a PiL-referencing outlet called ‘This Is Not A Love Shop’, in a pose familiar to anyone who’s ever seen someone who’d clearly gone a bit too far at a rave and is trying to pretend it isn’t happening. Various passers-by look concerned and try and see if he’s OK, but it’s only when someone drops a coin in his hat that he reacts, embarking on a dark dance as if he’s conjoined to the wall itself. His head only breaks contact in order to be slammed back against the metal panelling.

The reactions of pedestrians, not all of which look staged, is as interesting as the twisted choreography itself, with the editing staggered and occasionally reversed to sync perfectly with the music. There’s also a nice CCTV-style backwards reveal at the end. At the heart of it all is the brilliance of the track itself though, which is basically what we hope the next Modeselektor material sounds like. If all his mistakes are as magical as this, let’s hope he keeps making them. 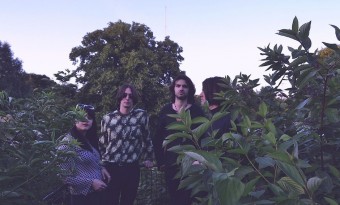