Last September Lorde was headlining Soho’s Madame Jojo’s, a traditional stop on the UK indie circuit, largely at the long running White Heat nights (the secrets to its success can be found here, by the way – Ed). A few singles and an album later, she’s managed to sell out Brixton Academy, with so much demand she had to add a Shepherd’s Bush Empire show for the night before, too. While balancing out being an international star who’s sharing nights out with David Bowie with school work, the seventeen-year-old has understandably not been touring as much as some other high profile artists, but this hasn’t damaged her fan base; if anything it made anticipation for Friday night’s show even greater.

I did write on this site back when debut single ‘Tennis Courts’ was first picking up traction that it sounded pretty dull, but a little while later, after digging into the whole of her Pure Heroine album, I realised I’d been pretty mistaken in my estimations of the New Zealander. The minimalism wasn’t zeitgeist-hopping laziness as first suspected, but instead a considered and well-orchestrated approach to incorporating that style into pop music, without the original influences becoming lowest common denominator versions of it in the process. Forget Beyonce’s video compilation, Lorde’s debut was the pop success of 2013, a combination of suburban boredom, wide-eyed romanticism and a sense of honesty. It’s no surprise that the music has been doing most of the work for her while she’s been taking long breaks in-between shows.

Coming on stage alone to a black curtain backdrop, a simple single white light illuminating the microphone, she kicked off with ‘Gory And Gore’ to one of the loudest audience receptions I’ve ever heard, and they (a pretty varied mixture of ages and genders) managed to repeat this after every song. 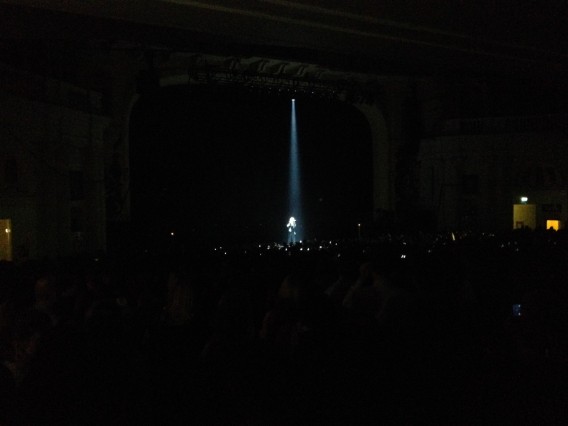 Only being on album one – and it’s not a long album – meant she had to dig into some b-sides to flesh the set out. Second track in the set ‘Biting Down’ maybe arrived a bit early, its low bass rumble subdued against the excitable audience. It also meant that later she dug out her organ-led cover of The Replacements’ ‘Swingin Party’, and also (and best of all) her collaboration with Son Lux, the acid jazz-cum-tribal dance-cum-goth pop of ‘Easy’, her staccato body movements fitting in perfectly with the jagged edges of the track’s rhythm.

It was the original tunes which the audience were most looking forward to though. With the black curtain now swept aside to reveal the minimal set-up of keys and drums, and a chandelier, gold picture frames and candle-like stage lighting making the stage look suitable royal (geddit?!), but Ella Marija Lani Yelich-O’Connor’s charisma still made sure the attention was totally on her.

‘Royals’ came on to a mass sing-a-long and phones-out moment for the front, while during ‘Team’ she took a quick three minutes to go and change into a massive gold sort-of-tunic thing (I’m not that into fashion as you might be able to tell) before concluding with album closer ‘A World Alone’, ending the night on the couplet “people are talking/let them talk” to another round of ear-splitting cheers and applause.

Save for, say, Adele, it’s about as bare bones as a pop show will dare to be at the moment, and all the better for it. Let’s hope her exams finish quick enough to continue making more music sooner rather than later. I’d suggest to Michael Gove to add Lorde to a music syllabus as a decent example of a mainstream role model and performer, but he’d probably say no because she’s not English. Sad face.

Social unrest in Spain doesn't put anyone off Primavera 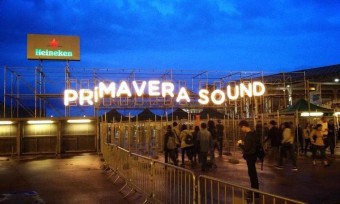