When I was a kid I used to constantly make up music videos in my head. Long journeys during my childhood were inevitably soundtracked by my tape of Madness’ greatest hits, and every trip would be spent imagining accompanying videos starring me and my friends. Oddly, the images I conjured were often less surreal than the original videos themselves, suggesting that I had quite a shit imagination. And it seems those faculties have only diminished since, as now, rather than making pictures move in my mind when I hear an evocative piece of music (or bit of prime North London ska), I simply think, “wow, I bet someone could make a really good music video to go with this song”. I blame the internet.

Still, while the web may have poked out my mind’s eye, it also regularly provides external nourishment such as this rather special video for Son Lux’s ‘Build a Pyre (Build Again)’. When I first heard the track, which appears on the New Yorker’s fantastic Alternate Worlds EP, I immediately began hoping that someone somewhere was planning to set some incredible visuals to it.

The skittering background bleeps conjure that feeling of something that looks artificial but is totally real, like a swarm of insects or the otherworldly sight of tears and blood when viewed under a microscope. They play off perfectly against some delicately chiming melodies and occasional percussive stabs, while deftly-judged, slightly aloof vocals courtesy of Cat Martino, Cameron Schenk and Aaron Strumpel (I presume it’s Martino singing the lead) actually surpass the starrier guest appearance of Lorde elsewhere on the EP.

Director Geoff Hoskinson clearly suffers from no lack of imagination judging by the video, taking the song’s fiery theme and chucking it onto a big pile of flammable materials. Film cells, diary pages and skeletal matches are all consumed, along with an Anna Calvi lookalike’s necklace, while the occasional jolt of jerky editing syncs nicely with the electronic elements of the music. However, while coming up with the idea is one thing, making it look as gorgeous as this is quite another. The black and white contrast works superbly, with the whole thing feeling like a silent movie but with a smooth modern finish. Who needs an imagination when you’ve got stuff like this to drool at all day?

Bad For Lazarus - Caught In The Twist 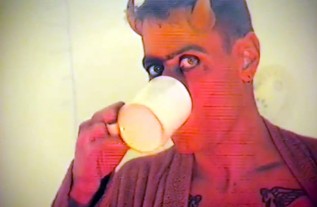 Watch the ridiculous official video for 'Caught In The Twist' by Bad For Lazarus...
Read More