When it comes to music associated with Dalston and Stoke Newington, folk probably isn’t what automatically springs to mind. Beyond the hordes of indie bands and house DJs competing for slots in the myriad bars and clubs like bald men fighting over comb, there is a strong jazz tradition, the reliably diverting avant-garde bookings at Cafe Oto and, thanks to some squirts on X Factor renaming themselves Kingsland Road, even a mainstream pop connection.

Yet you don’t have to look too far to find fertile folk hotbeds, from Theo Bard’s venue-hopping Woodburner night on Tuesdays to the appallingly named but enduringly popular Folke Newington night at The Waiting Room. At the forefront of this acoustic army are Burning Wheel, a motley crew revolving around the talents of Eoin Quiery, who are celebrating the recent release of their debut E.P. Country Eyes / City Smile, from which this video is taken.

The band, who’ve enjoyed residencies at both Folkie Newington and Dalston’s Jacolope club, have been working with Gerry Diver, who produced last year’s Mercury-nominated Sam Lee album Ground Of Its Own. He’s added a polished sheen to the band’s alt-folk sound, while the mixture of Celtic songcraft and subtle electronic influences suggest a less shambolic King Creosote, or an Irish Tunng.

The video for ‘Get There’, a song based on advice given to occasional Burning Wheel backing singer Franke Pharoah by none other than the great Marvin Gaye, sees Quiery using a loudhailer against occasional scenes of flickering flames. As attention around the band starts to heat up, we don’t think he’ll need a loudhailer to make himself heard for much longer… 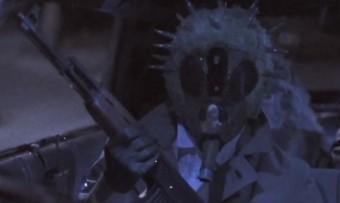 The relentless musical output of Ty Segall usually delights all who hear it, but not the furry freaks in this violent new video...
Read More