Amphetamine Ballads is the sound of a steaming bile splat on a cold Friday night pavement, an eruption from the darkest cavities of rotten Glaswegian stomachs. The sound of angry Scotsmen giving you the most threatening and sordid lap dance you’ve ever had, whilst burping in your face and dropping fag ash on your exposed saucy bits. Sexy.

The Amazing Snakeheads, a three piece from bonny Glasgow, are responsible for unleashing this glorious filth on our spit-soaked ears. And it’s great. If you like the idea of an album that may burn you with its fag ends then this is for you. If not, piss off, it doesn’t care; it’s going to drink all night anyway.

The album opens hard and hot with the bass lurch / drum march of ‘I’m A Vampire’ and ‘Nighttime’, coming across all blues-Goth-rock-n-roll and cobwebbed nightclub ceilings, lead belcher Dale Barclay growling in a thick Glasgae accent: “I’ll take you dancing all night long, I’m a soul sucker, I’m here to suck your soul”. It feels like he means it too so watch yourself, right. The vampiric theme of the opening song is continued – “I don’t come alive till nighttime” – confirming that The Amazing Snakeheads are out to show you a good night, but may cause you intense physical harm in the process. Fair enough I say.

‘Swamp Song’ is savage. Propelled by William Coombe’s menacing bass, its lyrics are reminiscent of “If You Go Down to the Woods Today’ but dribbled out by a drunken axe maniac. “You better hope that you don’t see me / I’ll be hanging from a tree,” Barclay threatens. It’s the song that the picnicking teddy bears would’ve played if they’d had enough and eaten all the other fuckers knocking about in the forest waiting for loose jam sandwiches. By the end the guitar has been distorted into screams and wails, the picnic well and truly over.

‘Here it comes again’ is, dare I say, poppy (yeah, I dared, and what!). Not Coldplay poppy (i.e. rubbish) but certainly more welcoming, like a zombie Hives. You still probably couldn’t play this at work. Built around the repetition of the song title barked out over and over, it shows the efficiency of Barclay’s lyrics and throat-ripping delivery as it builds and builds to a crescendo. “Here it comes again / Here it comes again” – it does keep coming, again and again. And again. That’ll be the lap dancing (cough).

Lead single ‘Flatlining’ starts off slow then turns into a raging blues romp. Once it’s shanked you with its pool cue the album switches gear, turning to a more pissed up, woozier pace. ‘Where is my Knife’ is as good as the title suggests, while ‘Every Guy Wants To Be Her Baby’ is a surprisingly jazzy little number. ‘Memories’ even manages to be surprisingly melodic.

By ‘Heading for Heartbreak’, We’ve woken up from our debauched night; lost in a wild west desert, wandering alone, dried out, hungover and lap dance shamed. “I’ve given you everything I’ve got!” cries Barclay over Ennio Morriccone guitar as drums pummel a few last shots from a cranked out old pistol.

‘Tiger By The Tail’ continues the western sound, and regret has now fully settled in. The memory of partying torments and rattles around the fried brain: “They say that time changes everything, but that is a lie, time changes nothing”. The band have gone from threatening knife violence to crushing self-doubt. Sounds like a normal night out in London to me. “I never thought that I could fail” is the closing lament before Barclay’s baritone is intertwined with a delicate female vocal and the song drifts off with a haunting ghostly “la la la la” waltz. If the fictional corpse Jarvis Cocker sings of in the Pulp song ‘Down By The River’ were to sing a song, it would be this.

It’s a remorseful way to end the album and leaves you wondering what this band will do next. Each song has a different style but all continually sound like the idiosyncratic work of one band. Which to me is the sign of a good album. Where they go from here is anyone’s guess but for now Amphetamine Ballads is a dirty, greasy night out that ends with a kick in the knackers and a kiss on the cheek. Once the aching is over you’re ready to go again. 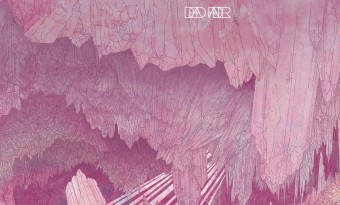 The digital destroyer that is Dead Fader offers not a double album, but two contrasting records scythed from the same mind - one all woozy hypnotism, the other a decibel-scattering blast. Both superb.
Read More