E.M.M.A. first caught my attention back when she released her debut album on Dusk + Blackdown’s Keysound Recordings in the height of the summer of 2013. While ‘Blue Gardens’ was received well (and was featured as one of The-Monitors’ 50 favourite albums of 2013), I still don’t think it got E.M.M.A. the true recognition she deserved considering that prior to the LP she was relatively unheard of, and how unique she sounds as a producer.

Seeing as The-Monitors spoke to E.M.M.A. back in July last year just as ‘Blue Gardens’ had dropped, I thought it would be nice to quickly catch up with her again and see what’s been going on since then, and to ask her a few questions about ‘Blue Gardens’ that I always wanted to know the answers to as well.

Who inspired you to make grime?

I don’t really think that I make grime. I’ve been lumped into the grime sound probably because of the aesthetic of my tunes, with it being FruityLoops. But there is a lot of that musicality to grime, which has always appealed to me, a kind of regal sound, which I guess crosses over with what I make.

You’re based in Liverpool/Merseyside, am I right? How has that affected your career as a producer and DJ?

I live in London and I started producing when I lived in Brighton a few years ago. London has definitely got things moving for me. I think not being in London can be equally if not more advantageous because there’s less chance you’ll get caught up in “scene” bullshit. A lot of my favourite producers don’t live in London, which is interesting.

How did the release of your album ’Blue Gardens’ on Keysound Recordings come about?

Blackdown rated my Wavey Tones release and my sound more generally so hollered at me. It was a pretty organic process, we were on the same page and I guess the timing was right. I was keeping an eye on what Dusk + Blackdown were doing and was developing a body of work so it all kind of melted together and my album was born.

How would you describe grime to someone who has never heard it before?

I probably wouldn’t bother; I try and avoid those conversations with people.

You’re still young as far as producers go, where do you see yourself in say, five year’s time?

Thanks. I see myself on a big old boat in the south of France.

Where do you find inspiration from to make music?

What are you working on at the moment?

I’m working with some vocalists, and some amazing collaborations. Me and Etch are in the studio a lot. Got a collaboration (not with Etch) coming out on vinyl soon but I’m not allowed to talk about it yet…

Generally me taking the mick out of Martin and vice versa interspersed with me sending Martin a tune every now and then.

Where can we see you live in the near future, are there any festivals/gigs that you are particularly looking forward to?

I’m playing the Dummy Stage at Camden Crawl in June. I’ve also got FWD in July. Next gig is Fabric back-to-back with Etch on May 16. 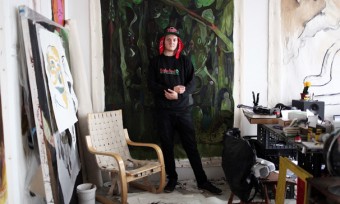