Our guest editor this week is Patrick Swift, a writer hailing from Huddersfield who currently resides in London, where he likes to think he is on the cutting edge of music and fashion. His passion for all things music have led him to write for well-known outlets such as Mixmag, Trap Magazine, Wordplay Magazine, Drunken Werewolf and The Tipping Point amongst others.

Thanks to stalwarts of the scene such as DJ Rashad (who last year released the sublime LP ‘Double Cup’ via Kode9’s Hyperdub Records), DJ Spinn and RP Boo, the Chicago footwork sound has well and truly become a staple of the electronic music world.

Now, new boys are making their way steadily through the ranks with some fearsome and infectious productions. One of said ‘new boys’ happens to be Lil Jabba.

Lil Jabba, real name Alexander Shaw, was born in Australia but can now be found between Baltimore and Brooklyn while perfecting his craft following an album release on Local Action last year.

When Lil Jabba had a few minutes spare, he picked us six classic footwork tracks that he really digs, which provide a great introduction into the genre for those who are unfamiliar with it. They also document the footwork battle scene that accompanies the hard-hitting genre.

DJ Rashad – ‘From The Start’

“This Stevie Wonder sample kills me every time, such a nice cut showcasing the soulful styling of 2010 footwork. Probably one of the first footwork tracks that really moved me, love this joint!”

“I’m a sucker for these kinda tracks. Big Gil Scott-Heron fan, nice chopping, heavy bass, what more could you want?”

“The track comes in after some old clip, but this track is cold. This period of footwork was great too, shortly after Rashad, Spinn, Manny and Traxman first started coming to NYC for Lit City Raves. It’s great to have seen how footwork has changed over the years and what stylistic tropes have become popular and which ones have faded. You can hear how this track of yore sounds different from what’s getting put out these days by Teklife.”

“Some more lo-fi stuff, some of the rawest in my opinion. As we’ve all grown as producers this kind of rawness gets phased out by deeper knowledge for mixing and EQing etc. But it still holds its merit as a banger and a wholly interesting production, big fan of this joint.”

“An oldie but a goodie from my homie Dro Carey on an alter ego tip. Big ups to the man, he put me onto some stuff way back in the Youtube days- riffing on the old school tom-heavy dark werks I dig!” 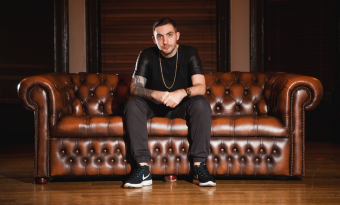 We chat to one of the freshest talents in Yorkshire right now, the genre-hopping behemoth of bass that is Jamie Grind...
Read More