Having owned a smartphone for about 18 months now, I’ve realised that all apps basically fall into one of three categories: absolutely useless (95%), useless but mildly diverting (4.9%) and genuinely useful (0.1%). Which is why our Apps page hasn’t been updated in an absolute age. However, Rewind Radio is an app so brilliantly simple it’s worth bringing the section out of retirement for. While it’s currently still in the useless but diverting section, it definitely has the potential to move up a level.

The idea is so obvious it’s amazing no one’s made it before. Billed as “the world’s first radio time machine”, you just input a time (year, decade or season depending on how specific you want to be) and it launches a radio station consisting of music from that era. If you connect it to your Rdio account you can stream the full tracks, otherwise you only get 30 second clips plus links to buy the tracks from iTunes.

We tried it in the office based on our season of birth, and the results were pretty amusing. Nicholas Burman got lots of smooth RnB (Mary J. Blige, En Vogue, etc.) and ‘Rhythm is a Dancer’ by Snap!, perhaps explaining his prowess on the dancefloor. However, he also got ‘Mr Wendall’ by Arrested Development which perhaps hinting at a future of destitution and homelessness. Enjoy the relative prosperity while you can, Nick!

Elsewhere, Lauren Wilson proved her rock and roll credentials with ‘Smells Like Teen Spirit’, although she also got Chris Brown and Aaliyah, proving the app isn’t working entirely perfectly just yet. As for me, I got… well, let’s just say I’m glad I wasn’t yet capable of conscious thought in the spring of 1984 (‘When Doves Cry’ excepted). We then thought about moving our searches back three seasons to see what music might have been played when we were conceived… and then decided we didn’t actually want to think about that too much.

So far so frivolous, but in our opinion, with the right support and development, Rewind Radio could definitely join the 0.1%. Being able choose shorter time periods, even single dates, would make it more fun, and more interesting still would be the ability to select specific genres or moods for those eras too (thus effectively making the role of wedding DJ redundant). Add in compatability with Spotify, Deezer and the other streaming sites, and we could have a truly great app on our hands… 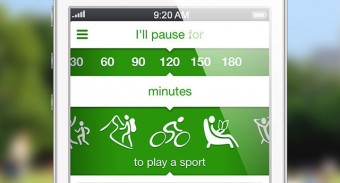 Is this the most ridiculous app yet? Quite possibly, as it's an app designed to, er, stop you using apps. Hmmm. The idea behind Pause is that people are spending too much time staring at their phones, which is true. However, is the best way to curb your app usage downloading another app? It's an odd idea, and one that is made to sound even worse by its truly toe-curling slogan: "Pause the digital. Start the real" (how about you pause your bullshit and start creating something halfway f**king useful? Twats). Anyway, the app's main function is simply tracking how long you keep your phone in flight mode. That's literally about it. You tell your phone what activity you plan to do - cook a meal, go for a run, delete this ludicrous app from your phone - then turn flight mode on, to stop you getting distracted from your chosen task. "It is that easy," runs the blurb, overlooking the fact that it'd be even easier to just not download the app at all and simply put the phone into airplane mode on your own. Or just turn your phone off and save your battery from being drained by pointless applications. Are there any other features? Well, Pause allows you to compare how much time you spend not using your phone to any of your Facebook friends stupid enough to have also downloaded it. "It might not be a drug," say the makers, "but a digital based addiction can still keep you away from your real life". That's true, but this still involves you using your phone, only in a way that stops you getting any pleasure out of it. Going along with their drug analogy, that basically makes Pause digital methadone.
Read More