Canadian polymath Chad VanGaalen seems like one of those artists who’s destined to enjoy a reasonable amount of cult acclaim that never quite spills over into mainstream success. You can imagine him happily beavering away in his Yoko Eno home studio in Calgary with his kids, who also double as his occasional bandmates, knocking out brilliantly weird albums and artwork and occasionally touching up the grinning monster head on the roof, until the fateful day he passes on.

At which point someone’s going to take a look at his back catalogue, which ranges from the glitched-out, experimental electronica of his Black Mold alias to beautifully heartbreaking acoustic numbers about his own kerosene-based viking funeral. And that’s before you even get to his fantastic, underground comix-inspired artwork and animations, and production work for the likes of much-missed fellow Albertans, Women…

Anyway, he hasn’t had his flaming body sent out to sea just yet, and a forthcoming fifth album this April, Shrink Dust, gives us a great opportunity to celebrate him while he’s, you know, actually still here. This good news comes complete with the below video for new song ‘Where Are You?’. Or rather, “not the video”; instead the track is accompanied by a compilation of VanGaalen’s previous animations.

If you haven’t seen his animated work before, prepare to be amazed. Or to vomit. It starts off with an odd little yellow fellow wiping its bum on a toothbrush and only gets weirder from therein. Bleeding, baby-faced balloons, slimy, sapphic-faeatured spacemen and a plethora of fungal, mutating freaks are the sort of creatures who inhabit Vangaalen’s twisted netherworld. It’s like a Kramers Ergot collection based around William Burroughs’ ‘Interzone’.

The song is somewhat less grotesquely psychedelic than the animations, although also possibly not that representative of Shrink Dust, which VanGaalen apparently sees as a “country record”. Instead, ‘Where Are You’ is backed by the sort of trip-hop beats that cropped up on the Gil Scott-Heron and Jamie xx album, topped by VanGaalen’s plaintive vocal. The fact that it will also form the partial soundtrack to VanGaalen’s first feature animation, a Sci-Fi film entitled ‘Translated Log of Inhabitants’, just makes it even more exciting. If it’s up to his usual standard, and the rest of Shrink Dust is as superbly produced as ‘Where Are You?’, then we could be in for a defining statement of a highly creative career. Can’t wait.

Time to Cut Your Teeth on Kyla La Grange 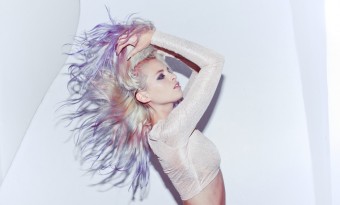 We slept on La Grange's first album, but her UV paint-spattered approach and work with producer Jakwob is making the follow-up harder to ignore...
Read More