Skrillex may have his fair share of critics, but the label he co-owns, OWSLA (it takes its name from Watership Down, bizarrely), has put out a few fine releases over the last couple of years. This track from Italian-born, London-based producer Phonat is one of the best yet.

A snarling yet sophisticated slab of tight two-step, the track is accompanied by some beautifully rendered 3D animations against a stark white background. It’s a bit like being led on a guided tour through an art gallery where the laws of physics go out the window and all the exhibits are thrillingly kinetic. As one adroit Youtube commenter (yes, they apparently do exist) puts it: “press printscreen, get new random kickass wallpaper”. Quite. 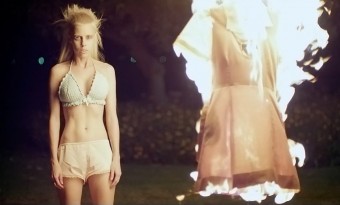 As the self-styled 'Zef-style' duo's European tour prepares to roll into the UK, Die Antwoord drop another video, and, as usual, it's ridiculous, puerile and made with a dubious dedication to salacious shock value. And, as usual, it's so well shot, directed and choreographed that it's utterly impossible to draw your eyes away from the colourful chaos erupting on screen. If you were wondering where they could possibly go after their last video, which featured Yolandi blacking up and a Lady Gaga lookalike giving birth to a prawn, well, suffice to say that the central theme here is a young orphan (played by Yolandi of course) being taken up the tradesman's entrance by a just-released gangster, with a frisson of marijuana, staircase urination and a quick shout-out to the benefits of vegetarianism. Obviously. While there are sadly no verses from Ninja this time around (although he does make a brief cameo as a pervy cop), he has no trouble directing his wife (they are still married, right?) getting frisky with another toothless feller in the vid's closing sex scene - indeed, the look on Yolandi's face as she receives a spot of uphill gardening is priceless. It's crass, yes, but Die Antwoord have turned this sort of thing into an art form, and while 'Cookie Thumper' is no 'Fatty Boom Boom', their audience's appetite is showing no sign of abating...
Read More