TRAAMS have been gathering steam fairly rapidly over the past year, to the point where the Chichester trio can now quite easily pull a bigger crowd in London than the vast majority of bands who have been here, slogging away in east end toilet venues, for over half a decade [read this for an insight into that particular death sentence – Ed]. Last night was the first date of their European headline tour, kicking off with a sold out show at The Sebright Arms; one of those rare venues where the sound is actually, you know, good.

Support came from Ice, Sea, Dead People (a personal favourite London band of mine, so please excuse any massively biased views that may follow). I’ve seen these noisy bastards about 10 times in the past year and can probably blame them for a small percentage of my recent hearing loss. Choosing to start their set with a string of new songs was quite a bold move, and it seems they’ve toned down ever so slightly from their trademark Fugazi-esque aural and psychological assault. The new material showed that their capacity for, dare I say, melody matches their mastery of dissonance, and I could swear that frontman Craig Sharp was actually ‘singing’ at some points.

The crowd, largely unfamiliar with ISDP, had been lulled into a false sense of security, and The Sebright was subsequently torn a new one by older tracks like ‘Ultra Silence’. They closed with ‘If It’s Broken, Break It More’, my personal favourite and a song that could be used to define the description ‘beautiful noise’, juxtaposing menacing rhythm guitar and pained, coarse vocals with a twinkling harmonic guitar part. The combination gives me the shivers even as I can feel the tinnitus setting in. It was only when the noise stopped that I realised that standing in the packed basement of the Sebright meant I was saturated in sweat, and the air was thicker than curdled, gone off milk (and smelled just as bad).

After a desperately needed fresh air break, TRAAMS came on to be greeted by sea of sweaty faces packing out every inch of the room. Second track ‘Low’ was the first to whip the crowd into excitement with its instantly recognisable jagged, broken-up riff and frontman Stu’s yelping, slightly Tom Verlaine soundalike vocals. TRAAMS do punchy, 3 minute indie-punk bangers incredibly well. It’s a craft they have an almost complete mastery of, and thankfully the majority of their set took on that exact form. However, what they don’t do so well are drawn out, one chord shoegaze-y psych drones. If you’re going to do that, you want the crowd to ‘space out’, not tune out, and on the few occasions that they tried this I found myself (and noticed a number of other people) doing the latter.

The shortcomings paled in comparison to the highlights, and by the end of the set the whole audience was singing along to their infectious-as-the-bubonic-plague anthem ‘Flowers’, a few hundred people shouting “I don’t even know your number, and you don’t even know my name…” right back at the band. It’s one of those choruses that you’d imagine the whole world to be familiar with, like ‘Living On A Prayer’, or Toto’s ‘Hold The Line’, of which, after a few pints, you could sing the first line to anyone you know and they’d sing the next line right back, without hesitation. That’s probably not quite how the scenario would play out if you tried it with ‘Flowers’. Maybe one year it will be.

ESG @ KOKO - The family that plays together, stays together. Or does it? 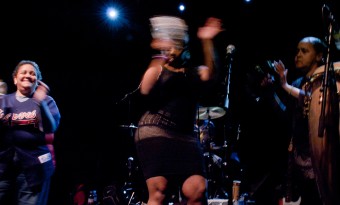 ESG were playing reunion shows back when half the 'Don't Look Back' brigade hadn't even formed. We checked out the London leg of what is rumoured to be the latest 'last tour' from this enduring family affair...
Read More