The irony of ATP’s ‘Don’t Look Back’ shows, where a revered act performs a seminal album in its entirety, is not just in the name but in the fact that its success has led to many promoters looking back more than ever. While reunion shows may often simply seem like lucrative testimonials for many acts (read: the remaining members of those acts who don’t hate each other’s guts), or a box-ticking exercise for fans born to late to see said acts in their prime, doesn’t seem to matter – just observe the hype around Fleetwood Mac possibly headlining Glastonbury this year.

When even a charity reformation by Menswe@r, featuring just one original member, managed to sell out a charity gig last year, you begin to wonder where it will all end? Will it ever end? Perhaps bands will just go on for ever, with members being replaced by their progeny in an eternal flogging of their back catalogue. For ultra authenticity, I’ve always thought that each member should have their bodies turned into actual instruments after they pass on. Imagine Zak Starkey playing a drum set equipped with bona fide Ringo skins, or a bone xylophone made out of Lionel Hampton’s skeleton. Pretty cool, right?

One band who seem to have taken this ‘keeping it in the family’ idea to heart (well, maybe not the last bit), is enduring funked-up post-punk legends ESG. Originally consisting of four sisters, Renee, Valerie, Deborah and Marie Scroggins, plus friend Tito Libran on congas, the legend is that they were given instruments by their mum to keep them off the mean New York streets.

Never has parental paranoia produced such glorious results. The minimal grooves of their early ’80s releases, which saw sparks flying between the vivacious rhythm section and Renee Scroggins’ sassy vocals, nonetheless remained strictly a cult concern at the time, despite having Martin Hannett produce their first EP and being championed by legendary DJ Larry Levan. However, a heaving KOKO last Friday night proved they are anything but that now. 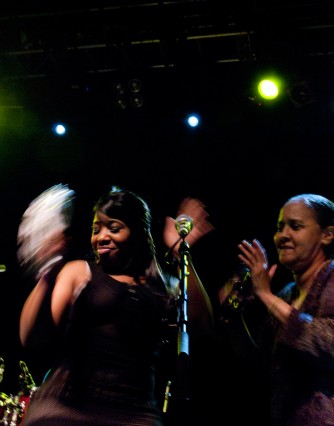 This is partially due to the band’s records being heavily sampled by a host of hip-hop acts, something addressed by ESG’s 1992 EP, ‘Sample Credits Don’t Pay Our Bills’ (Renee expanded on their antipathy towards sampling recently: “I don’t like the fact that a lot of the things that are used in rap records are very derogatory to women – we’re a female act, we’re women who create music and they’re sitting there saying nasty things about women. So we don’t respect that, we don’t like sampling”). Their popularity took another boost during the last decade, when New York’s post-punk scene became the subject of increased celebration and appropriation, causing critic Simon Price to facetiously speculate on Twitter that “they might be a James Murphy hoax for all anyone really knows”.

Yet something sets them apart from the hordes of other reformed bands. Despite retiring several times, their hiatuses have rarely lasted too long and their reappearances generally come complete with new material, some of which (2002’s ‘Step Off’ mini-album for instance) arguably surpass their earliest releases. So the rumours that this gig might constitute their last London appearance are taken with a pinch of salt – despite an early curfew, most people are simply here to party.

This is apparent as soon as the band take the stage and crack into ‘You’re No Good’, with the crowd singing Renee’s chorus back at her with gusto (which is just as well as the backing vocals are way too quiet). As a performance it’s virtually indistinguishable from the one they played at the opening of The Haçienda back in 1982 (which you can watch here), and is followed by a vigorous run through ‘Dance’. The latter validates my assumption that ESG have what must be one of the most fun rhythm sections to play in of all time, something summarised in my notes notes with the simple declaration: “TIGHT!”.

Sadly, that scribbled exclamation only sporadically describes the rest of the set. Without Valerie Scroggins on the kit, the rudimental rhythms that make ESG’s sound so dynamic clearly give her replacement, presumably a younger family member, some trouble. The beat goes way out on ‘Tiny Sticks’, in contrast to the triple woodblock action taking place in front of him, while several songs seem to drag more than they should. A common criticism of ESG is that their songs all sound the same, and playing a bunch of them all at pretty much the same pace, regardless of their tempo on record, doesn’t help to refute that. 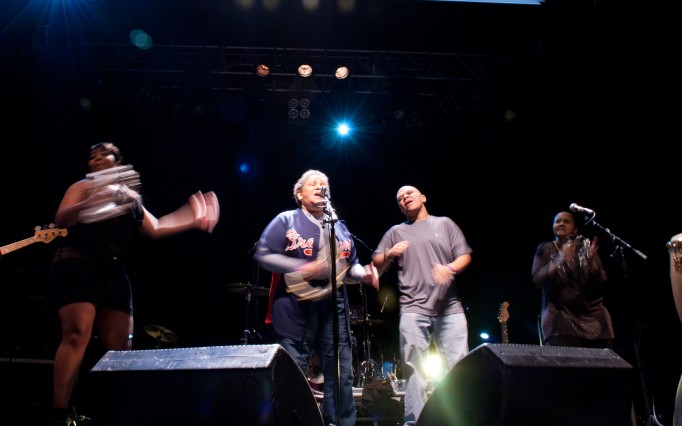 In contrast, the other newer members onstage seem to be having a ball, not least the bald bloke whose celebratory shuffle causes one guy in the crowd to shout, “g’wan Wes Brown!” in encouragement. Yet it’s Nicole Scroggins, daughter of Renee, who steals the show. The bassist is on barnstorming form throughout, especially during a thunderous version of the classic ‘UFO’ and a rollicking ‘The Beat’, which also sees the drummer up his game.

Yet even when the time-keeping slips, everyone is generally too busy having fun to notice. Instead, it just feels like watching a great band having a ball in the middle of a slightly drunken practice session, except against KOKO’s grandiose backdrop. Yet if the band look like they’re having fun, that’s nothing compared to the crowd. While the blokes in front of me, arms around each other partly in camaraderie, partly to keep themselves upright, occasionally aggravate the sad sack trying to sip his cider behind them in between scribbling notes (me), their glee makes you wish you were more drunk, rather than them more sober.

Renee deserves the most credit for keeping the carnival atmosphere going. Her voice is equally strong whether producing soulful pleas or punchy percussive yelps, and has hardly diminished at all with age. She also causes one of the most crowd-pleasing moments of the night, when she invites a girl onstage for a boogie to ‘Moody’ (apparently it’s her birthday, and her boyfriend had been pestering the band for a shout out on Facebook). Personally I’d be fucking mortified, but to her credit the birthday girl (assuming it is actually her and not some opportunistic exhibitionist) properly gives it some, and the crowd go nuts in response.

The general intensity rises after this point, with ‘You Make No Sense’ noticeably faster than most of the set (one middle-aged bloke near me even launches into a brief bout of pogo-ing). Most of the band depart before the song ends leaving only the rhythm section onstage, at which point Nicole takes the opportunity to put down her bass and milk the applause with a wee bop, before picking her instrument back up and finishing the song. Cool as ice.

There’s sadly no rendition of personal favourite ‘Six Pack’ in the encore, but there is a fantastic whistle-laden version of ‘Erase You’, which sees the crowd feverishly reprising the whoops from ‘Dance’. The Guardian’s review of ESG’s gig in Newcastle a couple of days later bizarrely described a set drenched in “menace and dread”, but there’s not a hint of that here. While this family affair is not without its flaws, the smiles on sweaty punters’ faces as they stream out onto Camden High Street tell their own story. If the band are serious about erasing themselves after this tour, this was a fitting way to sign off. 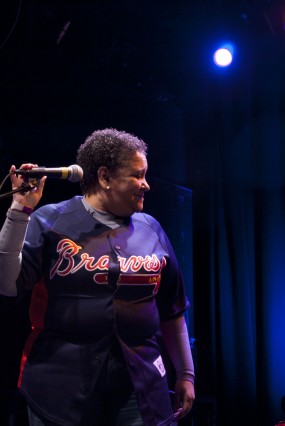 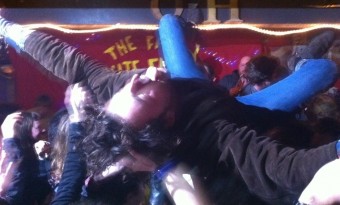