At the start of the year, Ty Segall announced that Sleeper, a foray into acoustic territory, would be his only album of the year. He lied a bit and a half about both those points. First off, he managed to fit in another record with a fuzz-garage rock group, aptly named Fuzz (not quite breaking the record of the three albums he released in 2012 but hey, everyone’s got to have quiet years). The second lie? Well, this was the half one. The album was indeed a luscious, stripped back affair, all romantic and dripping in strings and intimacy. But he must’ve been itching to make a bit of noise again, as the four-piece band we witnessed at The Scala managed to add some real oomph to proceedings. If anyone could make an ‘acoustic’ set suitable for a briefly moshing and crowd surfing audience, it’s Ty.

White Fence opened proceedings, and their very vintage take on vintage rock was fun if not all that fresh – at times on their album it literally sounds like they’ve copied a track off of a battered 7″. In tow with the likes of Kurt Vile, it seems like they’re looking to go down a much more psych route, while Ty and co seem to be wanting to become the world’s ultimate Black Sabbath/Led Zep combined tribute band. Neither option is right, but I personally do prefer a bit of shredding to a wig-out.

So onto the man of the night. Segall gave the “Sleeper band” a minimal introduction before breaking straight into it. While the likes of ‘Sleeper’ and ‘Crazy’ glide along in dreamlike fashion on record, live the drums punch through the vocal melody and the extra acoustic/electric guitars really add weight. About three tracks in and you do notice something odd though. For a man whose shows normally require you to leave the premises altogether before you can hear anything again, and whose sweaty, blonde fringe is the front-of-stage beacon, having the whole band sat down meant that anyone behind the third row didn’t have anything to visually connect with. I’m 6’5″ and struggled quite a lot [although not as much as the guy who apparently shouted out: “If you wanna sit down, play at the Barbican!” – Ed.].

The idea was nice, but perhaps should have been considered venue by venue. As the guys must be well aware, his central audience is similar to that of Mac DeMarco’s: boozy couples and groups of mates in the early twenties, wanting a bit of a sing-a-long and possibly getting up on their boyfriends’ shoulders for the likes of ‘Girlfriend’ (which did happen in the encore, when Ty decided to pick up the electric six string for a bit of an end-of-show rock out).

Performance-wise you couldn’t fault the band; tight, swapping instruments around for a couple of songs, they certainly looked like they were having fun. It seems that with Sleeper and these new shows, Ty Segall as a solo artist is starting to develop new ideas and directions in the more introverted / artistic category (which isn’t surprising after so many albums of gritty, reverb-heavy indie-garage). The question is, are his fans ready for it? It took a lot of people (including myself) this long to catch onto him. Maybe now it’ll just take everyone a little while to keep up with him.

ATP - End of an Era Part One 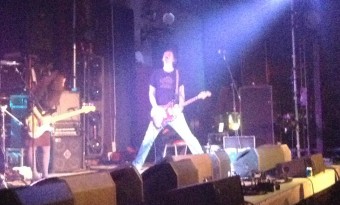 It was supposed to be the first leg of a celebratory send-off, but poor booking and scheduling suggests maybe it won't be so missed after all...
Read More