Back in the days when Syd Barrett had hair, and the imperative to ‘tune in, turn on and drop out’ became a mantra for those seeking chemical mind expansion, the liquid light show was an integral part of the Sixties psychedelic scene. Rock bands like the Pink Floyd or The Deviants would find themselves illuminated by a bath of liquid light, as bubbling magma or splitting amoeba-like patterns would be projected onto the performers, blurring the barrier between singer and audience, music and image, light and sound.

For progressive young musicians like 23 year old Nicolas Jaar, and 24-year-old Evian Christ (a.k.a Joshua Leary), this era may not hold much sway on the kind of music they’re making. Yes, they both utilise elements of psychedelia (particularly in Jaar’s latest project Darkside, which he’s described as like “a cross between Plastikman and Can”), but in ways that are fresh and innovative, maybe even slick. And yet having the so-called ‘ephemeral cinema’ of counter-cultural legends the Joshua Light Show as their moving image projections works perfectly, conjuring up the anonymity of a veiled online presence, the kaleidoscopic repetition of a screensaver. Both are performing as part of “Transcender”, a programme of events which have been running at the Barbican for the last five years, dedicated to ‘ecstatic, devotional and psychedelic music from around the globe’.

For Evian Christ, who rose to fame in late 2011 with a series of eight anonymously posted tracks accompanied by geometric-centric videos, the huge pulsating screen works to his favour. As he moves from industrial to techno to deep house, at one point almost hanging on the periphery of gabba, Christ’s intense breakbeats could render the chin-strokey nature of the Barbican a little ridiculous. This is music to dance to; unfortunately, we’re all imprisoned in a chair, staring up at a screen of colour. This may well be twenty-first century psych, staring yourself high to a giant laptop.

Nicolas Jaar’s set is perfectly suited to both a big stage and a big screen, as the reverb and echoes of his little details are allowed the space they deserve: a choir of tiny girls dressed in black or the sounds of water dripping from a tap give it all a sense of majesty. In the last part of his set, Jaar and guitarist Dave Harrington take to the stage to play tracks from Darkside’s new album Psychic, which they released this week.

Though there are plenty of beautiful moments to choose from, at one point Jaar is joined by the girl’s choir as a backdrop of bright maroon inks drip slowly down across the screen. The theatricality of much of his music is brought out by the hypnotic visuals and downtempo minimalism of his melodies. After a slow start during an encore (“Itunes isn’t working mate,” or something to the effect, heckles an amused punter), people finally trickle down to the front of the stage. Leaving the auditorium feels like being ejected from a warm amniotic bath of sound. I’m not even kidding, I was spaced out on the night bus, and all I’d had was a sherry.

The Sixties British light show artist Mark Boyle once described liquid light shows as being “the visual medium of the underground”, and “one of the elements that made that particular cultural scene so different from any that had gone before”. Recent engagements with the medium suggest that, rather than a retrogressive and nostalgic thing, the liquid light show signals a return to more analogue forms of VJing or video art. It’s not just the Joshua Light show who are including digital techniques and engaging with contemporary music. The experimental film-maker and light show artist Julian Hand makes psychedelic videos and shows for people from Bintus to The Oscillation, and he’ll be doing a live light show to accompany Acid Mothers Temple’s acoustic gig at Café Oto next week.

“If you buy my lamp, you won’t need drugs,” said the man who invented the lava lamp, Edward Craven Walker. As sober-looking haircuts pour out of the Barbican just short of ten pm, it appears the same can be said for liquid light. Makes a change from the Sonar blow-out’s Jaar’s normally accustomed to playing at, I guess… 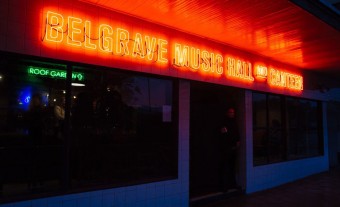 “I like it here because it smells of B&Q” - a quartet of exceptional bands tear Leeds' newest music venue a new one...
Read More