After the cryptic codes, secret streams, hidden records and subsequent lucrative eBay auctions, it’s something of a relief that the Boards of Canada album is now finally out, if only so we don’t have to read a squillion daily news updates about it on FACT anymore. It was an incredibly well-executed hype drive, especially considering the duo’s aversion to publicity, but reading through the latest discoveries on the 2020k blog and combing Youtube videos for clues was getting a bit tiresome.

Of course, the problem with building up such a gigantic wave of hype is that, once it breaks, the album in question usually struggles to stay afloat. Indeed, when a full video was finally released (for ‘Reach For The Dead’) it met a mixed reception, with the general consensus being that it simply sounded like Boards of Canada – a comment that could could be inflected positively or negatively depending on your opinion.

The same goes for ‘Tomorrow’s Harvest’ itself. Your first impression is, yes, this sounds like a Boards of Canada album. Yet considering their last album (2005’s ‘The Campfire Headphase’) sometimes sounded more like Thievery Corporation, in some ways that could be considered a relief. And let’s face it, despite many people attempting to decipher their formula, no one else really sounds like Boards of Canada either. Standing still isn’t such a bad thing when you’re already in a unique location.

Also, the more you listen to it, the more the album reveals to you. Kicking off with a weirdly ’70s flourish that could almost be an ident for spoof retro science show ‘Look Around You’, opening track ‘Gemini’ sees several noises squirming against each other as they sliver to the surface, eventually emerging into the sunlight only to be swallowed up by a bass gurgle. ‘Reach for the Dead’ sounds better lurking in these shadows too, adding an uneasiness to contrast with its blissful harmonies. It creates a fungal tension that flits between natural splendour and pungent filth. It’s kind of where Boards of Canada belong.

Indeed, one of the benefits of their style having stayed static is that a few tracks here could quite easily fit on their classic albums and EPs. ‘Cold Earth’ and ‘Nothing Is Real’ are both familiar in their shifting finery, while there are plenty of their usual ambient interludes too, such as ‘Transmisiones Ferox’ (Ferox is Latin for ‘fierce’, classics fans) which sounds like a space control centre located in your own gut.

In a very rare recent interview with The New York Times (which is worth reading in full, if only to save us basically quoting the entire thing here), the BoC brothers hinted that the theme of the album concerned “an irreversible vector we’re already on as a species”, namely overpopulation, and how they’d been inspired by “inappropriately positive or uplifting synthesizer music” in ’80s sci-fi and horror films. The album’s title takes on particularly creepy connotations in this light.

The lineage of this type of dystopian vision, from Soylent Green to Channel 4’s recent Utopia series (a show which attracted a cultish devotion that would be familiar to the pair), seems to be reflected in the titles of tracks like ‘Palace Posy’ (an anagram of apocalypse) and ‘Sick Times’, which also fits the theme by gradually decaying at a point when previous BoC tracks would have expanded.

It also reflects their composition process, which involves them playing live instruments through “stacks of destructive hardware” and creating a collage from the surviving sounds. At their best they reform these elements into something truly otherworldly, but there are moments where tracks feel superfluous, unfinished or just a little unsatisfying, such as the messy and meandering ‘Jacquard Causeway’.

Such moments are in the minority though. ‘Come to Dust’ hits the lowest bass depths of the album and its weary beat drags in the most satisfying way possible, while the butterfly’s heartbeat of ‘New Seeds’ and the hazy ‘Split Your Infinities’ seem to exude an almost physical heat – you can practically feel your eyeballs drying up as you listen. ‘Collapse’, meanwhile, is one of the few BoC tracks that sounds like someone else, its spacey repetition recalling the Krautrock group Cluster or, more recently, Emeralds.

The album closes in gorgeously unsettling style. The string descent of ‘Semena Mertvykh’ (Russian for ‘Seeds of the Dead’) hums with desolation, and ironically is enhanced by the degradation of its form – it was recorded onto an old VHS deck “so you can hear all the pockmarks”. In fact, they attribute part of their appeal as being the result of the accidental moments of magic that are sometimes born of recording on analogue equipment:

“As with digital photography, people have gotten used to applying simulated filters onto their pictures just to inject a bit of romance into the thing, because the raw pictures are so flat. But in the analog realm these beautiful things just happen by themselves without your conscious effort. You could say the wobbles and flutters in our music are equivalent to something like weeds overgrowing an old building. Nobody puts the weeds there, but nature comes along and makes the scene very tragic and beautiful.”

Tragic and beautiful sounds about right. The hype that preceded ‘Tomorrow’s Harvest’ had many fans salivating like kids being driven to a theme park. For some, finally hearing the album was a bit like arriving only to find the theme park had actually closed years ago and was now lying in ruins. But ruined theme parks can be all more magical for their dereliction. It may still just sound like a Boards of Canada album -but since when is that a bad thing? 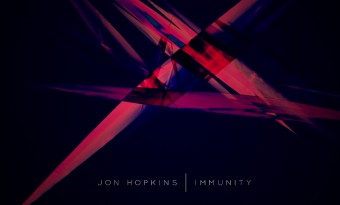 Jon Hopkins had the dubious honour of being dubbed 'the next Brian Eno' by The Guardian this week. Not dubious because it was an unflattering comparison, obviously, but because it guaranteed a raft of outraged musos spluttering below the line about how there would NEVER be another Brian Eno and how DARE the paper even suggest it - the man is still alive for goodness sake! Putting to one side that it's highly unlikely journalist Jude Rogers wrote the headline in question, the reason Brian Eno comes up at all in reference to Jon Hopkins is because they've actually been working with each other for almost a decade. After hearing Hopkins' second album 'Contact Note' in 2004, he invited the young musician to play on his 'Another Day on Earth' album, kicking off a long-running collaborative relationship. Indeed, after becoming disillusioned with his own work being overlooked, Hopkins ended up finding a great deal of success working with others. Through Eno he ended up becoming involved on Coldplay's last two albums, while his records with Fence Collective mainstay King Creosote earned the pair a Mercury Prize nomination in 2011. A film score for cult Brit sci-fi flick 'Monsters' also saw him up for an Ivor Novello award (Hopkins' Twitter bio sardonically reads "Ivor Novello Award and Mercury Prize losing artist"). Yet for all his success as a composer, you sense that his personal work is what he really craves to be recognised for. While his last effort, 2009's 'Insides', was warmly received by many, it didn't really raise his profile as a solo artist. 'Immunity', however, is already doing just that. We may only be in June, but this is an album that is certain to wriggle onto umpteen 'best of 2013' lists by the end of the year. Classically trained yet obsessed with synths and electronics from a young age, 'Immunity' combines his two obsessions with a clinical yet charming dexterity, like an amiable surgeon cheerfully humming to himself as he removes a particularly hermetical brain tumour. Hopkins records anything from dripping taps to reversing lorries for his tracks, but his musique concrète tendencies are always used to serve rather than distract. While some of the harder and more complex beats might put off fans of his more pedestrian earlier work, most will be left with their jaws swinging in the breeze at the sheer progression of it. The first two tracks are particularly stunning. 'We Disappear' starts with a bunch of keys rattling in the door to his studio, which opens onto a feast of warm pulses and sharp glitches, descending into a languorous fade-out that's like letting sugar-coated snowflakes melt on your lolling tongue. Then there's the incredible 'Open Eye Signal', which revolves around an insectoid buzz of a bassline, swooping between tones like a smashed bee (apparently Hopkins spent a full six weeks on the bass alone - and it shows). The latter is reminiscent of James Holden's stunning 'Lump', and Hopkins employs a similarly exacting attitude, mixing magnificent, mutating music into scattershot electronics with such attention to detail that every bar sounds different. It's miles away from the pre-set, drag 'n' drop laziness of many electronic musicians, yet also has a distinctly emotional feel that's similarly distinct from the alien environments of Amon Tobin and the like. As a case in point, 'Breathe This Air' employs an Apparat-esque mix of symphonic sounds and electronic beats. It's lovely, but in a way that would be a little bland if it wasn't for the shattered garage beat underneath - a bit like Gwyneth Paltrow on a bed of nails. 'Collider' is well-placed to follow it, a punishing beast that actually sounds like it's being blasted through the Large Hadron Collider itself. It's a huge but bracingly airy sound, with a slight drag to the beat providing the sensation of intense g-force being applied to your eardrums. The second half of the album struggles a little to bear the weight of the opening half's brilliance. The intimately cinematic 'Abandon Window' is wonderfully recorded but a little dull, while 'Form by Firelight', in what is, to be honest, probably a hugely misleading comparison, but the one that immediately sprang to mind, sounds like an Autechre remix of Kanye West's interminable 'Runaway'. Hopkins has spoken about 'Immunity' following the arc of a festival experience, and 'Sun Harmonics' feels like that moment when dawn breaks to reveal a thousand blinking ravers, staring around glassy-eyed with the echoes of a gurn still rippling across their faces in pure, wrecked wonderment. Unfortunately, it also sounds like a Gold Panda track with most of the more colourful elements removed, which is unfortunate as, at a dozen minutes, it's the longest track on the album. In fact, the cavernous ambient coda is more interesting than what precedes it. Still, much like a festival veteran emptying their baggies into a final wrap for the road, 'Immunity' ends on a high. The closing title track is a wonderfully muted piano piece with a rhythm created out of, well, god knows what - considering Hopkins' habits probably a freezer defrosting, a game of Kerplunk being put away and the creaking of his own knees. Another incredibly gradual ending only serves to emphasise that this is a record he refused to rush. To promote it, Hopkins collaborated with biochemist-cum-photographer Linden Gledhill to produce a video matching tracks from 'Immunity' to microscopic images of food dye crystallizing (see below). Also like his music, it was created using the wonders of modern technology, and could easily be mistaken as being wholly artificial. Like his music, it takes what seem like mundane natural processes and presents them in a way that's often breathtaking. He may not be the next Brian Eno, but who cares? It's Jon Hopkins' name that's on everyone's lips right now...
Read More